Michigan Gov. Rick Snyder Carves Out Own Niche Inside GOP 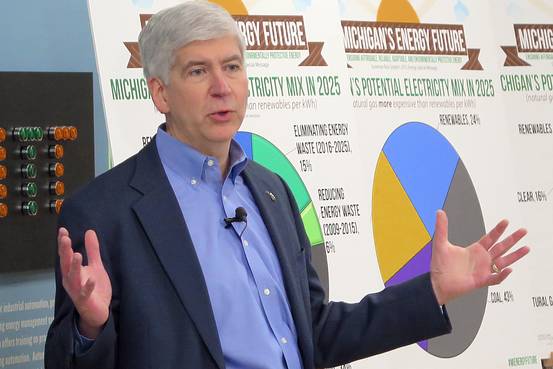 Gov. Rick Snyder is, for now, more focused on balancing the demands of his rural, urban and suburban constituents than making a splash on the national stage. Pictured, Mr. Snyder speaks about using cleaner sources of electricity at the Detroit Electrical Industry Training Center in Warren, Mich., on March 14. Associated Press Don’t expect Michigan Gov. Rick Snyder to provoke the kind of media firestorm that has engulfed his neighbor to the south, Indiana Gov. Mike Pence. That’s because Mr. Snyder, a fellow Republican, seems almost allergic to hot-button political debates.And yet, that aversion hasn’t stopped the soft-spoken Michigan governor from carving out his own provocative niche inside the GOP as a Republican who often seems eager to stray from the party’s conservative orthodoxy.

The Michigan governor proudly supports controversial education standards known as Common Core. He has tried to avoid fights with organized labor. And he wants to see his state generate more electricity from renewable sources of energy. [emphasis added]

Mr. Snyder’s latest crusade is a May ballot measure that would increase Michigan’s sales tax by one percentage point to generate more money for the state’s crumbling roads. The former accountant frames the debate in economic terms: good roads are much cheaper to maintain than bad ones.

“It’s a good investment,” he said during a recent interview with the Wall Street Journal.

In an era of heightened partisanship, Mr. Snyder represents something of a throwback – the centrist Midwestern governor more focused on balancing the demands of his rural, urban and suburban constituents than making a splash on the national stage.

Rick Snyder, after all, is no Scott Walker, the Wisconsin governor who parlayed his landmark fight with the state’s public-sector unions into near front-runner status for the Republican presidential nomination.

Mr. Snyder, for example, is unapologetic in his support for Common Core, arguing high standards are better than low ones – a view he shares with former Florida Gov.  Jeb Bush, one of the leading contenders for the GOP nomination. Mr. Snyder, who said he has discussed the issue with Mr. Bush, likes to remind voters that under the program states and local school boards have the flexibility to design their own curriculum. And he mocks Republicans, like Texas Sen. Ted Cruz, who call for its repeal.

“There’s nothing to repeal,” he said. “It was done by the states.”

And unlike Mr. Walker, Mr. Snyder has tried to avoid fights with Michigan’s powerful labor unions. One big exception was his decision to sign right-to-work legislation, prohibiting any requirements that would force workers to pay union dues. But more recently, he has opposed Republican efforts to repeal a state law that sets compensation for construction workers on government projects.

Mr. Snyder also expresses concern that the country’s anti-tax fervor may occasionally go too far. “Government should have a limited role, and it needs to be extremely efficient about using its resources,” he said. “But there is an appropriate role for government to make investments, particularly in infrastructure.”

The Michigan governor is one of the few Republicans to refuse to sign Americans for Tax Reform President Grover Norquist‘s pledge not to raise taxes. “I don’t sign pledges like that,” he said. “If you’re going to govern, you have to have flexibility to make those decisions.”

And unlike other governors, Mr. Snyder is skeptical of using tax credits to lure business to Michigan, worrying about the long-term loss of tax revenue. He said he warned one chief executive looking to move jobs to Michigan that if he wanted some kind of tax credits, they would have a very short conversation.

Of all the Republican governors in the Midwest, Mr. Snyder may have the lowest profile but he has one of the best track records when it comes to job creation. Michigan’s unemployment rate has dropped from 11.2% when he took office to 5.9% today, the lowest since 2001, and the nearly 400,000 private-sector jobs the state has added since he became governor is the fifth highest tally in the country and the best in the Midwest.

Given Mr. Snyder’s obvious aversion to conflict, he isn’t one to critique other officeholders, but the contrast between his governing style – “relentless positive action” – and that of other governors, including Mr. Walker, is obvious enough.

“Scott has done some very good things,” he said in the recent interview. “I’m proud to say, in over four years as governor, I have not fought with a single person, and I haven’t blamed anybody. I’ve stuck to this problem-solving approach. And I think it’s really allowed us to do things in a very positive way.”

Mr. Snyder has been mentioned as a possible contender for the Republican presidential nomination in 2016, but with the field starting to emerge, the Michigan governor has dropped out of the conversation. He plays coy on the subject of his own presidential ambitions, saying he would decide after the May vote on raising the state’s sales tax. He is also recovering from a tear of his Achilles tendon.

“I’ve got an Achilles and an election in May,” he said.

But after that, he plans to tour the country promoting Michigan’s revival – and presumably himself.