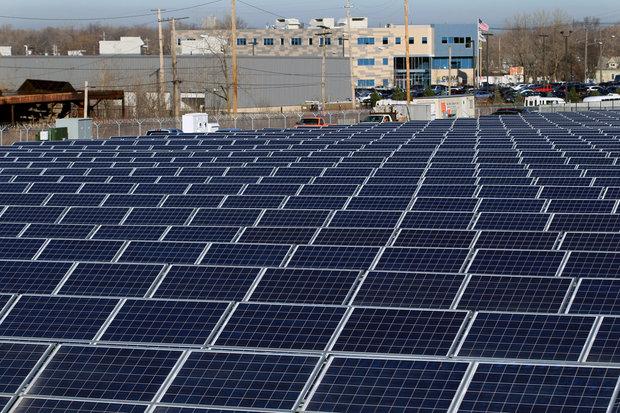 More than 4,200 solar panels feed power to the Cuyahoga Metropolitan Housing Authority's headquarters on Kinsman Road in Cleveland. A new poll of Republican voters has found that conservatives support solar and other renewable technologies. (Gus Chan, The Plain Dealer )

COLUMBUS, Ohio -- Ohio's Republican voters and conservative independents are greener than state politicians might have believed.

They strongly support green energy and want to see more of it in Ohio, a new poll of only Republican and conservative independents has determined.

The report also found that:

FirstEnergy is still arguing for special subsidies, though what it would be called and how the money would be used are no longer certain. AEP dropped its proposals and has sold off some its power plants to investors that would run them as independent power companies.

Public Opinion Strategies, a Colorado-based polling company widely used by GOP candidates, talked to 400 registered Ohio Republican voters earlier this month, including some independents who said they voted for Mitt Romney in 2012.

The poll has a margin of error of 4.9 percent, adequate, considering that its findings are overwhelming.

"The survey clearly demonstrates support among conservative voters for a broad rage of policies to encourage energy efficiency and greater use of renewable energy," wrote Lori Weigel, a partner in the polling firm.

"The vast majority of voters in this conservative portion of the ideological spectrum say they would tell GOP candidates to back these kinds of policies. They think of renewable energy as a job creator, and place these sources of energy squarely in the mix of more traditional energy sources," she wrote.

"They even go so far as to be willing to pay more in higher electricity prices if renewable energy cost more."

Hartley said the poll's results clearly show that conservative voters want their candidates to support renewable energy policies and are more likely to vote for those who do. He said his group plans to talk to lawmakers and policy makers about the poll's findings.

He added that the poll did not strongly focus on the question of whether the state ought to return to traditional regulation, a topic the utilities have been talking to lawmakers about.

The survey did include a question about wind farms and state rules determining now close a wind turbine can be to other properties.  GOP lawmakers slipped a new setback rule into a budget bill in 2014 that has effectively stopped all major wind development in the state. The poll found that 72 percent would support "more reasonable set-back limits for wind turbines."

The poll also measured how voters feel about different kinds of power generation, including coal, nuclear and gas, as well as wind and solar. It found that voters favor natural gas power plants and energy efficiency efforts, that solar is more popular than coal, wind or nuclear power.