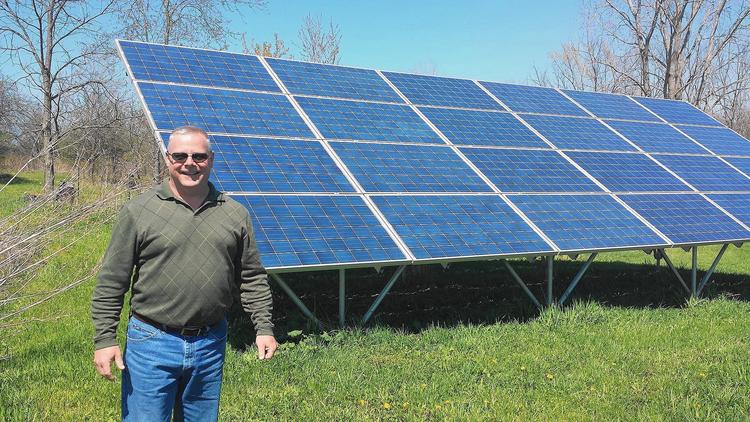 Kevin Moore with Midwest Wind and Solar said solar systems can be designed for rooftops or to be freestanding to accommodate most properties. (Carrie Napoleon, Post-Tribune)

Forty-five years after the first Earth Day launched the modern environmental movement, economics are proving to be the catalyst bringing more people online with clean energy.

Kathy Luther, director of environmental management at the Northwestern Indiana Regional Planning Commission, said the agency and those like it are working to lower the costs of solar energy to encourage more people to install systems at their homes or businesses.
NIRPC has partnered with Dyer, Gary, Hobart and Valparaiso to bring Solarize Northwest Indiana online by cutting through the zoning bureaucracy of placing rooftop or freestanding solar modules on their property and reducing the costs of the systems through volume purchasing.

Through June 30, residents and businesses can sign up to see if a solar system can be installed on their property, how it would financially benefit them and just how much it will cost to take the plunge. NIRPC also selected an installer through a competitive proposal process, Midwest Wind and Solar LLC of Griffith to help streamline the process.

"Some of the top barriers for people to solar energy is the cost and the paperwork," Luther said.

Partnering with the towns and cities tackles one of those barriers. A federal grant that helps reduce the cost per solar module based on the number of participants helps tackle the second barrier.

"It's like a Groupon for solar," Luther said. The more businesses and homeowners participate, the lower the cost of the solar modules for all of the participants. That combined with a federal tax credit of 30 percent of the cost of installing a system through 2016 could reduce the cost of a typical system to as low as about $12,500.

Kevin Moore, president of Midwest Wind and Solar, said the falling prices of solar panels and the shortened time for a return on investment are bringing people from all walks of life to green energy. The Solarize Northwest Indiana program makes the systems even more economical.
When he first started the business, Moore said, all the metrics showed his clients would be young, environmentally conscious men. But, eight years in, he has learned that his client base is more diverse than he ever expected.

"One thing we have found that is very interesting is people who are looking at retirement in the not too near future, say 10 years away, they are investing in solar," Moore said.

One concern as people look to retire is determining how they will live on a fixed income. Solar energy stabilizes a homeowners' or businesses' energy costs and provides a level of predictability, he said.

Moore said solar first became popular in the areas where electric rates were the highest such as California and Hawaii, but as the cost for the systems go down, they are popping up throughout the Midwest. More said he has between $4 million and $5 million in installations in his territory of Indiana, Illinois, Michigan and Wisconsin.

"It really all comes down to a financial calculation as to whether people do it or not," Moore said.

A typical homeowner can see a return on their investment in as little as four to five years depending on the size of the system installed, he said. Currently, cost for electricity is about 12 cents a kilowatt hour. Producing your own solar energy reduces that cost to about 5 cents per kilowatt hour, he said.

The process begins with a phone consultation where technicians look at the site using Google Earth and Streetview to see if the property has a site that would work for an installation.

Technicians are looking for a shade-free south, east or west facing surface. Moore has seen applications mounted on barns, garages, residents, businesses and even ground mounts. Size of the systems is determined by the kilowatt hours the customer uses each month and just how much money they have to invest in the system.

"It would get rid of about eight months worth of electric bills a year," Moore said.

The consultation results in a proposal that details the costs, the savings and projected return on investment. It also includes a bevy of statistics that help drive home the impact switching to solar, such as a simple residential installation is equivalent to planting 4,000 trees or reducing driving by 25,000 miles per year.

"I think what draws the general population to renewable energy first and foremost is financial …The rest, I think that's icing on the cake. They go, 'Wow'," Moore said.

Carrie Napoleon is a freelance reporter.

Informational sessions have been scheduled from 9-11 a.m. May 9 at the Plum Creek Center in Dyer and at 6 p.m. May 18 in the Community Center in Hobart. Dates and times for session in Gary and Valparaiso are to be determined.

Kevin Moore, president of Midwest Wind and Solar is a member of IndianaDG. Congratulations Kevin!