WSJ: Will Solar Energy Plummet if the Investment Tax Credit Fades Away? Yes and No

Will Solar Energy Plummet if the Investment Tax Credit Fades Away?

Many solar supporters say the loss or reduction of the credit will be a ‘cliff’ for the industry. But others say the credit’s impact is overstated and solar will continue to grow.

What’s going to happen when a huge incentive to invest in solar power shrinks or vanishes?

At the end of next year, the 30% investment tax credit for solar and other renewable power is set to expire for residential systems and plunge to 10% for commercial installations. Boosters are calling for Congress to extend the credit in its current form.

The tax-credit crunch is looming at a time when solar is on the rise. Solar installations increased 30% last year, thanks partly to cheaper photovoltaic panels. Solar proponents note that the solar industry employs more than twice as many U.S. workers as coal mining and has added jobs 20 times faster than the rest of the economy.

Many supporters say the abrupt end date of the 30% credit represents a “cliff” for the industry. Without the current incentive, they argue, installation of solar-power systems will plummet, and thousands of jobs in the industry will be lost as a result.

Others, however, argue that the cliff isn’t as steep as it appears, and that solar will continue to grow even without the 30% credit—albeit not as quickly as before.

Amit Ronen, director of the GW Solar Institute and a professor at the Trachtenberg School of Public Policy at George Washington University, argues that the end of the 30% credit will send solar off a cliff. John Farrell, director of the Democratic Energy initiative at the Institute for Local Self-Reliance, says the impact of the tax credit is overstated and the solar market will continue to rise. 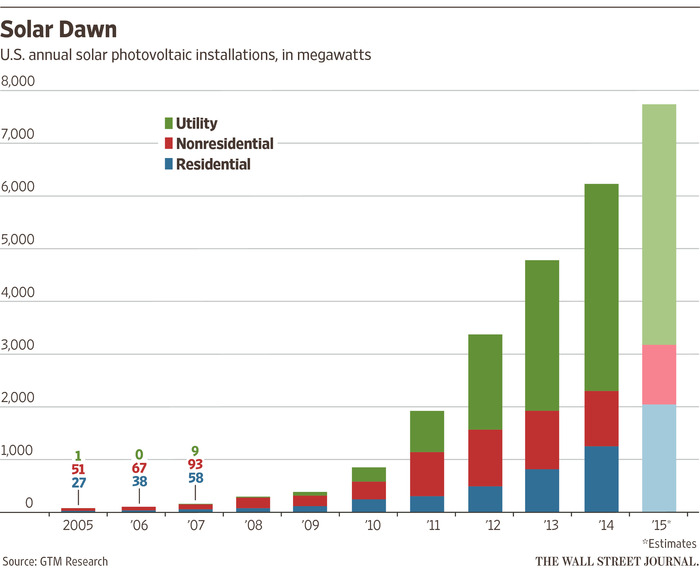 YES: The Industry Will Need Many Years to Recover

The 30% investment tax credit is paying dividends for America. Solar is growing faster than any other domestic energy source as prices continue to plummet, even beating out coal and cheap natural gas in some markets. The solar industry created one in 78 of our country’s new jobs last year and provides living-wage salaries for more than 200,000 Americans.

But without congressional leadership, the credit will expire for consumer-owned systems and shrink for commercially owned systems at the end of 2016. When it goes, it will have a dramatic effect on the industry—and economy.

A big drop ahead

Can the solar industry survive without the current credit? Yes, but not as we know it today.

According to Energy Information Administration data, if the 30% credit is not extended, rooftop solar photovoltaic installations will plunge 94% in 2017 from a year earlier and utility-scale projects will decline 100%, with neither recovering anywhere close to today’s levels even a decade from now. Bloomberg predicts solar installations will drop by two-thirds in 2017, which the Solar Energy Industries Association estimates will cost America 100,000 jobs.

What the solar industry needs is the same as every business: certainty. The multiyear assurance provided by the eight-year, 30% credit leveraged billions in new high-tech innovation and project development, lowered risks to allow startups to launch new products and services, and resulted in tens of millions of panels installed across America.

Now installers are rushing to complete projects before 2016, with many larger projects already shelved. A multiyear credit extension would provide developers and financiers a long enough runway to stay in the game and make solar projects a comfortable investment play. Even a gradual ramping down of the credit is preferable to the economic shock embedded in current law.

Some take a more optimistic view of the days ahead, saying the estimates I’ve cited are far too severe. But the numbers come from three of the leading prognosticators of solar-industry growth rates, relying on extensive data, surveys and expert interviews. They are the best estimates we’ve got.

The argument that financiers, not developers, grab about half of the tax credit anyway, so the loss of the incentive won’t hurt that much, also doesn’t match real-world practices. The credit has proved an essential financing mechanism to getting solar built, even though some projects rely on complex tax-equity markets to monetize the credit.

The logic behind the optimists’ argument is that middlemen, not developers, grab about half of the tax credit anyway, so the loss of the incentive won’t hurt that much. The problem is that most estimates say middlemen capture a much lower percentage than half; some put it below 10%. Obviously, that’s a much more significant hit for developers to face.

Optimists also speculate that it will get easier for people to finance solar systems themselves with loans if the credit goes away. The residential solar market is shifting to

more self-financing, but rising prices in the absence of the credit could make solar uneconomical and scare off buyers. The lack of a credit will also make it harder for utility-scale projects, which account for most solar investment dollars, to compete for scarce capital and against more carbon-intensive generation alternatives.

The tax credit has been a solid investment for America, which shouldn’t be abandoned abruptly or prematurely. If our goal is to diversify and decarbonize our nation’s energy portfolio, why would we eliminate the credit before removing billions of dollars of subsidies for fossil fuels? If our goal is to provide more consumer choice and lower electricity bills, why would we want to cut off the credit just as it is starting to benefit America and its households?

If our goal is to create tens of thousands of new jobs, the 30% credit should not be allowed to expire just yet. It’s simply working too well.

Mr. Ronen is director of the GW Solar Institute and a professor at the Trachtenberg School of Public Policy at George Washington University. He can be reached at reports@wsj.com. 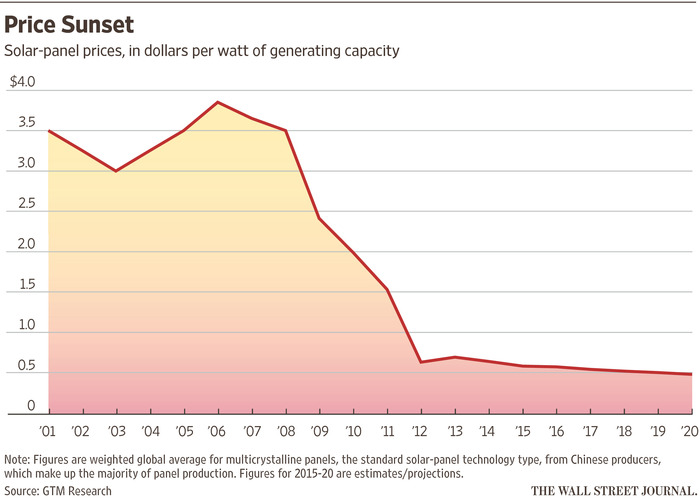 NO: Grim Forecasts Overstate the Drop For Several Reasons

The approaching expiration of the 30% federal tax credit for solar energy has created talk of a cliff that will put a hard end to solar’s recent and rapid growth.

In fact, the abrupt fall may remove several barriers and allow the solar market to continue its rise.

I don’t have a problem with subsidizing solar power, a socially useful activity. But it’s clear that solar can survive—and thrive—without the investment tax credit for consumers and a lessened one for commercially owned systems. A study from Bloomberg estimates that the loss of the tax credit will cause solar capacity to only quadruple, instead of quintuple, by 2022—still a substantial increase. Our own analysis reinforces this assessment: In 22 states, at least one gigawatt of solar (and often much more) could be installed at a comparable cost to retail electricity prices by 2017, tax credit not included.

So why are the grimmer predictions about the future of solar incorrect? For starters, the cliff that people talk about is smaller than it appears. Most folks with solar on their rooftop used a third-party lease or power-purchase contract. That third party took on much of the financial risk and the responsibility for redeeming the 30% tax credit. These financial middlemen have absorbed nearly half of the tax credit, and as a result, solar developers and customers have received an effective discount of 15% instead of 30%. So the current incentive isn’t as big as it looks, and the effect of losing the incentive won’t be as severe as many think.

Another factor behind the dire predictions: There’s been a surge in development to secure the tax credit by the end of 2016, artificially inflating the 2016 numbers with projects that otherwise would have been completed in 2017. That means that the percentage decline after 2016 looks worse than it actually is. Meanwhile, some sources that are making downbeat predictions have consistently underestimated the development of solar and other renewable energy.

What loss of certainty?

Pessimists also say that businesses and investors demand the certainty that the credit provides. But one could argue that the change in the tax credit at the end of 2016 is certainty—it has been in statute since 2008.

What’s more, the change to the tax credit will open up new options for financing. Solar energy’s low risk and steady returns are attracting new investors whose profit expectations are much lower than those of Wall Street financiers. One company has already offered the first solar securitization, packaging its solar leases into vehicles for institutional investors.

If the change in the tax credit opens the door to more sizable, low-margin investors that offer a discounted cost of debt and equity for solar projects, we estimate that the net cost of solar would rise just 2.5% with the loss of the tax credit.

The change to the credit may also drive prospective solar clients, with decent credit, from leasing to lower-cost self-financing. With less paperwork to file, the relatively lower costs and higher returns of ownership become more evident.

A November 2014 pro forma analysis by the National Renewable Energy Laboratory suggests that self-financing lowers the cost of solar by 23% for residential customers and 87% for commercial customers.

It’s easy to assume that losing the federal tax credit is nothing but a 30% cut in the growth potential for solar energy. But this ignores several countervailing forces, from the middlemen’s current cut to falling costs to the advent of low-cost financing. Even though coal and gas retain subsidies like heavily socialized pollution costs, solar doesn’t need the federal tax incentive to compete. Instead, the market provides several ways to glide over the solar tax cliff.

Mr. Farrell is director of the Democratic Energy initiative at the Institute for Local Self-Reliance. He can be reached at reports@wsj.com.