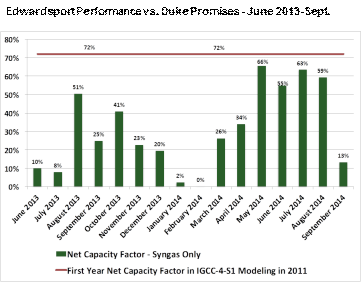 Plant Was Not “In-Service” as Duke Claimed in 2013

INDIANAPOLIS — Captive Hoosier ratepayers doled out nearly $400 million before Duke Energy’s Edwardsport coal gasification power plant delivered any net energy to the grid, according to testimony filed late Monday night by a coalition of citizen groups before the Indiana Utility Regulatory Commission (IURC). Through the end of March 2014, consumers have paid in excess of $688 million for the scandal-ridden and problem-plagued power plant.

The testimony also criticizes poor operations of the Edwardsport Integrated Gasification Combined Cycle (IGCC) Project and questions Duke’s rush to declare the plant “in-service” in 2013. The citizen groups are asking the IURC to establish performance standards for the plant and set operating cost caps to protect ratepayers from being overcharged for Duke’s mismanagement and the company’s failure to keep its promises.

As a result of the Indiana General Assembly passing a 2002 law known as Construction Work in Progress, or CWIP, Duke Energy has been allowed to collect the up-front costs along with a rate of return while the plant is being built and not producing any energy.  CWIP charges represent nearly $627 million of the $688 million collected by Duke Energy through the end of March.

In this proceeding, Duke is seeking approval to recover additional amounts in excess of $370 million in CWIP and other costs related to the project during the current review period of April 1, 2013 and March 31, 2014.  Also at issue is Duke’s decision to unilaterally declare the Knox County plant “in-service” on June 7, 2013.  That decision has tremendous implications on ratepayers as a construction cost cap agreed to by Duke Energy was a key provision of the 2012 settlement with the Office of Utility Consumer Counselor, the Indiana Industrial Group, and Nucor Steel and later approved by the IURC.

“The Company’s declaration that Edwardsport was ‘in-service’ on June 7, 2013 was an obvious attempt to circumvent or evade the construction cost cap,” said technical expert David Schlissel of Schlissel Technical Consulting.  “The plant was not in service in any meaningful way.”

Duke Energy promised regulators that the plant would achieve an average capacity factor of 72% during the first 15 months of commercial operation on gasified coal or “syngas”.  Since being declared “in-service” over 18 months ago, the plant’s average actual monthly capacity factor on that fuel was a mere 21%. And in no single month, as demonstrated in the figure on the left, also included in Mr. Schlissel’s testimony, has Edwardsport achieved the level promised by Duke

Mr. Schlissel also testified that the plant was still in the testing phase in November 2014 and has not yet achieved “substantial completion” of construction — more than 18 months after it was declared “in service.”

Accounting expert Ralph Smith of Larkin & Associates said in his testimony filed on behalf of citizen groups that Duke prematurely declared Edwardsport to be ‘in service’, or ready for commercial operation, in June 2013, contrary to accounting standards.

The expert testimony filed on behalf of the citizen groups also recommend the Commission “establish an operating expense cost cap and performance standards for the future commercial operation of Edwardsport to protect Indiana ratepayers from a continuation of the poor performance and unreasonably high costs the plant exhibited from June 2013 through March 2014.”

Duke recovers CWIP and other costs for the Edwardsport IGCC project on customer’s monthly bills through Rider 61, which is a bill component called an adjustable rate mechanism, or ‘tracker’.  Currently a household using 1000 kWh per month is paying on average $12.67 per month, which does not include any fuel charges attributable to the IGCC project

The testimony filed on behalf of the Citizen Groups is available upon request or see below.