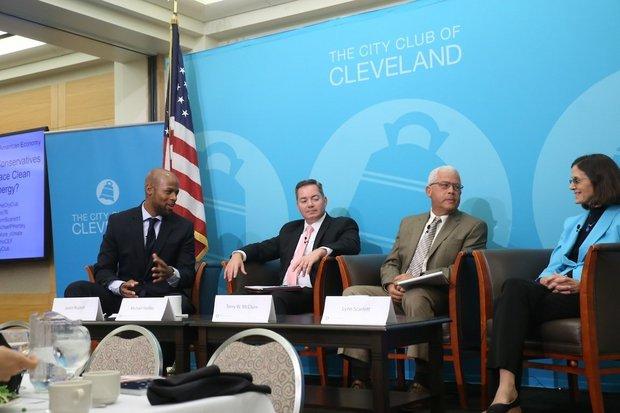 City planner Jason Russell (left), Michael Hartley, executive director of the Ohio Conservative Energy Forum, Terry McClure, farmer and former president of the Ohio Farm Bureau and Lynn Scarlett, global director of public policy for the Nature Conservancy, talked about the debates in Ohio about renewable energy this week at the City Club of Cleveland. (City Club of Cleveland photo)

CLEVELAND, Ohio -- A long-time Ohio Republican political operative, a past president of the Ohio Farm Bureau and the Nature Conservancy's global director of public policy have a message for state lawmakers: Your voters are greener than you thought.

The trio appeared Wednesday before a City Club of Cleveland panel moderated by Jason Russell, a city planner.

The forum this week released a poll which surveyed only Republican and conservative voters. The poll found that these voters support renewable energy, energy efficiency programs and net metering for home solar systems.

Terry McClure, a conservative fifth-generation northwest-Ohio corn, soybean and wheat farmer and still part of the Ohio Farm Bureau, said electricity is critical to farming today. He said that locally-produced wind energy is now cheaper than what the utilities want to sell farmers. And he added that solar panels are a natural addition to the huge barns on most farms.

Lynn Scarlett said businesses globally are gearing up to provide renewable technologies because the demand for renewable energy is expected to double by 2030.

The bottom line? The trio think the adoption of renewable energy and energy efficiency technologies are a kind of global energy tsunami that is coming. The only question is whether Ohio will participate.

Hartley tried to explain to the somewhat skeptical City Club audience that GOP lawmakers are likely to accept a green energy middle ground between the utilities and legislative ideologues on the one side and the environmental and consumer groups on the other.

Every time I can use a renewable source to produce my electricity, I save gas or coal, for next generation."

So far, that acceptance has not happened.

There were protracted battles at the state house in 2014 and 2015 over rules dating back to 2009 requiring Ohio power companies to provide annually increasing percentages of electricity generated by renewable technologies such as wind and solar.

Related rules also  required utilities to provide energy efficiency programs for customers to help them reduce how much electricity they use.

The GOP-dominated legislature, led by the most ideologically conservative members, "froze" the rules for two years in the spring of 2015.

They changed state law after months of hearings and lobbying that pitched large industries and the utilities against consumer and environmental groups, smaller businesses, clean energy companies and their trade groups.

FirstEnergy, which had been openly critical of the efficiency programs as bad for business, immediately shut down its consumer appliance and lighting rebate programs.

The freeze disappears at the end of this year and the lobbying has already begun with the objective of extending the freeze during a quick "lame duck" session in late November or December. Kasich has threatened to veto such a measure.

The Ohio Conservative Energy Forum has staked out a middle ground that Hartley believes can be approved and signed by the governor -- either this year or next year.

"I spent 20 years on campaigns to elect Republicans," said Hartley. "Many of the folks in the legislature I have known since they were councilmen and commissioners, since college.

"Economic growth, national security, faith and the political angle of winning elections -- that's how you talk to them."

Hartley's group wants state rules to require utilities to up the percentage of renewable energy by 5 percent over the next five years.  It's now at roughly 2.5 percent.

"What we have put forward, it's guaranteed that environmental groups are not going to accept, it doesn't go far enough for them," he predicted. "On the other side, there are those who want a permanent freeze. That goes way too far."

The poll results seem to backup Hartley's assertions that GOP voters not only support green energy, efficiency programs and consumer choice but also that they will not reject conservative lawmakers who vote to require utilities to provide it.

Hartley, McClure and Scarlett urged their audience to reach out to their lawmakers.

McClure summed up conservative thinking about power this way:

"Every time I can use a renewable source to produce my electricity, and save gas  or coal, for next generation, that is a good thing."

He said the statehouse fights over the issue is an example of the "polarization we have on so many issues right now."

The City Club recorded the discussion and archived video and audio versions.