Henry Co (IN) Planning Commission: Arguments for, against wind farm 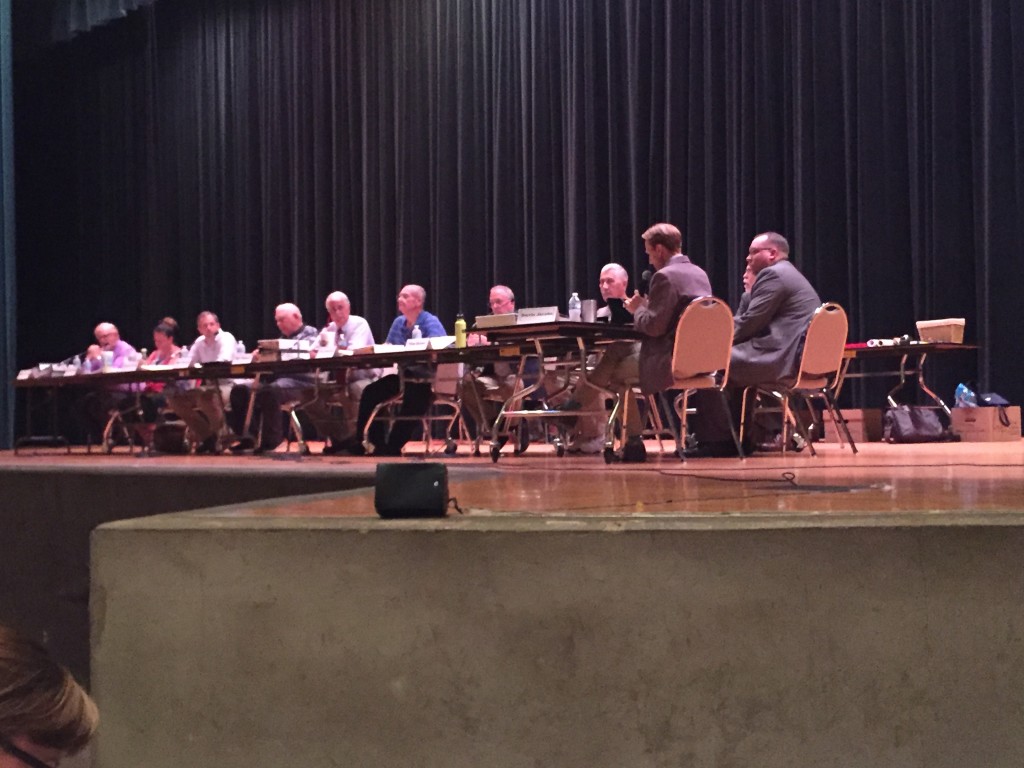 Members of the Henry County (IN) Planning Commission hearing testimony on 7/23/19 on the Big Blue River Wind Farm proposed by the Calpine Corp. 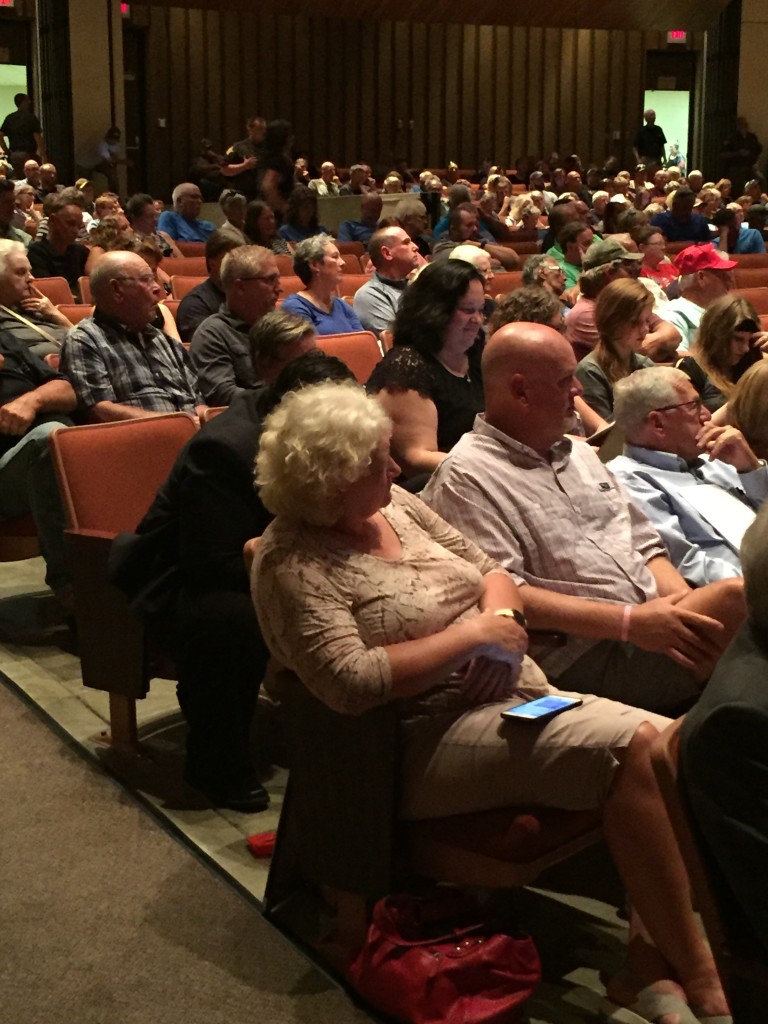 A very large turn out in Bundy Auditorium in New Castle for the 4.5 hour public hearing. 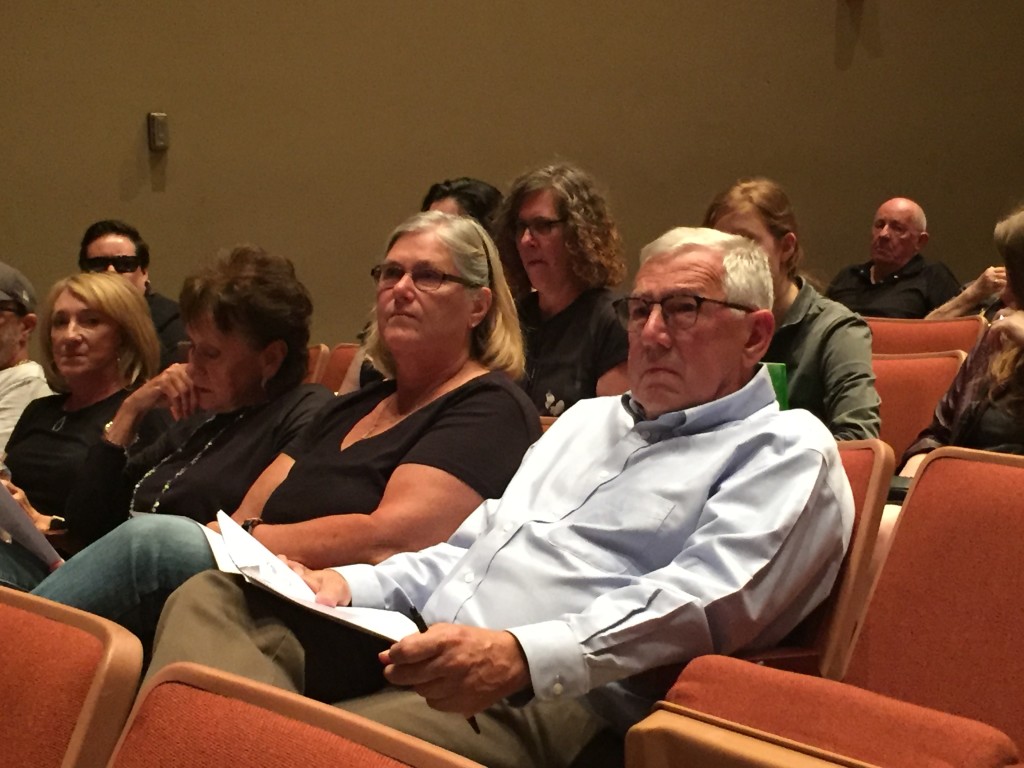 Arguments for, against wind farm

Darryl Neal (right) points to a map showing where a proposed wind turbine would go up across the street from the home his son, Jake, is building. Darryl wondered outloud if Jake should have even started work on the new home. The map also shows four-mile buffer zones around different communities in that part of the county.

Tarantino was speaking to the Henry County Planning Commission – and the hundreds of people sitting out in Bundy Auditorium to see how the planning commission voted on a proposed wind farm.

The Henry County Planning Commission ultimately did not approve a permit request Tuesday night for the Big Blue River Wind Farm, which is owned by Calpine Corporation.

Before their final vote, however, the planning commission members heard approximately two hours of comments from people supporting the application, people opposing the application and government entities and representatives.

The first two people to speak in favor of Henry County’s proposed wind farm were actually from Indianapolis.

Lauren Ann Arnold offered a national perspective of the energy regulatory industry. Arnold said there is a nationwide move of energy companies to strive for 100% carbon-free renewable energy as the long-term expectation for meeting electricity needs.

Jared Noblitt serves as Executive Director of the Indiana Conservative Alliance for Energy.

“While many folks of Henry County seem fixated on the negatives of allowing wind turbines here, we are focused on the benefits,” Noblitt said.

Noblitt argued a wind farm in Henry County would generate millions of dollars in property taxes, helping get around the state’s property tax caps.

He said a project like Calpine’s would also give local farmers another way to get the most out of their personal property.

Henry County farmer David Score said it’s getting harder and harder to make ends meet in farming. Allowing some farmers to install wind turbines on their land could help matters, he said.

One speaker also argued for the wind farm project because it would take a 1-1.5 years to complete and that means jobs for people in Henry County.

In total, 10 people spoke in support of the permit request.

Attorney Steve Snyder represented several individuals and five local towns at Tuesday’s public hearing. Snyder reminded the planning commission members they have the authority to increase safety setback distances beyond the minimums in the county ordinance.

“If you review the information I have provided on setbacks, you will see that 1,500 ft. setback from a residence is woefully inadequate,” Snyder said.

Snyder said the five towns he represents have filed suit against Big Blue River Wind Farm LLC “to enforce health and safety ordinances that were adopted by the towns.”

Snyder said those ordinances, which create four-mile buffer zones around each town, were created by state lawmakers to give Indiana towns the ability to protect their citizens from “threats to health and safety” existing outside the towns.

Harrison Township resident Rosalind Richey accused Calpine of not meeting all the requirements in their application. Richey said, for example, the studies provided do not cover low-frequency noise or infrasound, as outlined in the ordinance.

Richey claimed the plan also ignores other underground utilities in the area.

“This plan puts the health and safety and general welfare of potentially thousands of people at risk,” Richey said.

Hagerman was distressed at the thought of the earthwork that would be required to pour the foundations of 500 ft. turbines. He also worried about the concrete bases leeching into underground water supplies.

Hobbs asked for clarification on any penalties Henry County could use against Calpine or any other company that violated the wind ordinances.

McShirley used the terms “walled off, entombed, encapsulated” to describe what could happen to Henry County as economic growth continues to spread for Indianapolis.

In total, 15 people spoke in opposition to the permit request.

State Representative Tom Saunders (R-Lewisville) was included in the “opposition” segment of the public hearing. Nonetheless, he spoke as the man who represents Henry County in the Statehouse.

Saunders pointed out that in the most recent legislative session, the legislature grandfathered 12 ordinances into law from Henry County towns that created the buffer zones mentioned earlier in the meeting.

Saunders had a 2008 Indiana Supreme Court ruling as support to his argument that towns have the ability to pass local regulatory ordinances, even if they don’t have explicit zoning authority.

“Those ordinances were adopted legally and lawfully and they stand that way today,” Saunders said to the planning commission. “I think, and you guys can correct me if I’m wrong, of the 38 turbines, 36 are within the buffer zone.”

Saunders said it appeared Henry County voters spoke in the last election when they replaced five incumbents with anti-wind candidates.

“I think it is our duty to represent the people who sent us here and who elect us and depend on us to look out for their well-beings,” Saunders said.

Susan Huhn, president of the Henry County Council, quoted figures from Calpine claiming the wind farm could provide $800,000 a year, on average, in tax revenue for Henry County. Huhn asked how much that new money could ultimately cost the community.

“We need to choose wisely how we use our resources,” Huhn said.

“As on official, I know the importance of listening and working on behalf of my constituents,” Winchester said. “We are to serve them, abiding by their wishes. Otherwise, we jeopardize their trust in our positions as officials.”

Winchester also recently learned she may be living in the proposed wind farm area.

“Like the voters, I do not wish to live in such a project,” she told the planning commission.

The Henry County Planning Commission ultimately voted 4-4 on the request. Because the request needed five votes either way to definitively be approved or denied, it is officially “not approved.”

There was no word from the Planning Commission office as of Wednesday afternoon what the next steps are – if any – regarding Calpine’s application.