Away from the national stage, the political divide on clean energy is not as wide as it appears.

Republican voters and elected officials are generally considered hostile toward renewable energy. That’s likely because many prominent Republicans deny humanity’s contribution to climate change and oppose subsidies for clean energy technologies, despite the fact that fossil fuel industries benefit from billions of dollars in tax breaks.

Instances like the snowball toss made by Republican Senator James Inhofe, chairman of the Environment and Public Works Committee, coupled with his record of votingagainst clean energy legislation, help to cement the perception that conservatives widely oppose the adoption of low-carbon technologies like solar and wind.

But the reality is that the Republican electorate, on the whole, has a favorable view of clean energy. A 2016 poll by the Yale Program on Climate Change Communication found broad support for government policies to expand renewable energy and reduce greenhouse gas emissions, with 84 percent of all registered voters in support of more funding for energy sources like wind and solar, including 75 percent of Republicans.

The bipartisan embrace of clean energy is playing out in California, where a recent study by the Denver-based energy information company SolarPulse found that people in Republican-leaning communities are five times more likely to purchase rooftop solar than people in communities that vote Democrat, as ThinkProgress reports.

To reach these findings, the company reviewed data on 25,000 California houses that installed solar panels from 1997 to 2015, and looked into the political leanings of the areas with the highest proportion of solar homes. 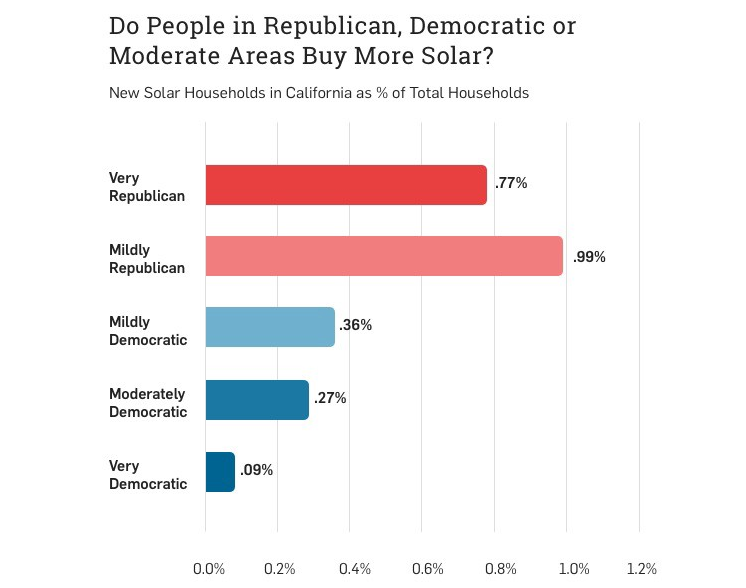 Income did not prove to be the differentiating factor between political groups, given that the median per capita income in Democratic areas is roughly $8,000 higher than in Republican ones. The SolarPulse report found that home ownership is a driver, however, given 50 percent of California Democrats are renters compared to 40 percent of Republicans. Renters are far less likely to make a long-term investment in a home project like rooftop solar, and solar companies want stable solar purchasers.

But the biggest factor proved to be geography, according to the report. Republican districts are typically located in the southeastern part of the state, where there are stronger solar resources and people are more likely to own large suburban homes that are better suited to host solar systems.

“When you start to look at how the installation of solar panels can translate into your individual electricity bill and what that can mean for your family, especially in California where you deal with above-average per-kilowatt-hour electricity costs, I think that can trump any political persuasions you may have about solar and renewables,” Paul Zalewski, director of digital marketing for SolarPulse, told the San Diego Tribune.

Clean energy isn’t only attractive to Republicans in progressive states like California. Solar has strong support from Republicans in Florida, Arizona, Nevada and several other states. Even staunchly Republican states like Oklahoma, Senator Inhofe’s home state, are starting to embrace solar power. Wind energy also has a very high approval rating among conservative voters. Texas, one of the reddest states in the nation, is currently at the forefront of wind energy generation in the U.S.

For some Republicans, Trump’s opposition to clean energy is a point of contention. In August, after Trump said at a rally that “wind kills all your birds,” Republican Senator Chuck Grassley said if the GOP nominee wins the presidency and tries to attack wind energy subsidies, “he’ll do it over my dead body.”

In coal country, much of the hostility toward renewable energy is misplaced. Market forces -- predominantly the increased availability and plummeting cost of natural gas -- have led to the coal industry’s decline.

Meanwhile, efforts are underway to retrain coal workers to participate in the growing renewable energy sector. The same is true for the oil and gas sector, which has been under pressure from low commodity prices.

Energy policy is likely to play a role in swaying voters in the 2016 election. During the first presidential debate, Hillary Clinton advocated for leveraging the clean energy sector as an economic driver -- while Trump said, referring to solar, “I’m a great believer in all forms of energy, but we’re putting a lot of people out of work.”

In actuality, U.S. solar jobs are growing 12 times faster than the overall economy, and last year provided more jobs than oil and gas extraction for the first time. Wind turbine technician recently became the fastest-growing job in the country, according to the U.S. Bureau of Labor Statistics. The International Renewable Energy Agency projects there could be as many as 24 million clean energy jobs worldwide by 2030.

As solar and wind get tied up in debates on the national stage, California’s experience offers another data point showing there’s much more agreement on clean energy among U.S. voters than it would seem. As the staff at SolarPulse wrote: “If all politics is local, then solar panels aren’t political at all.”