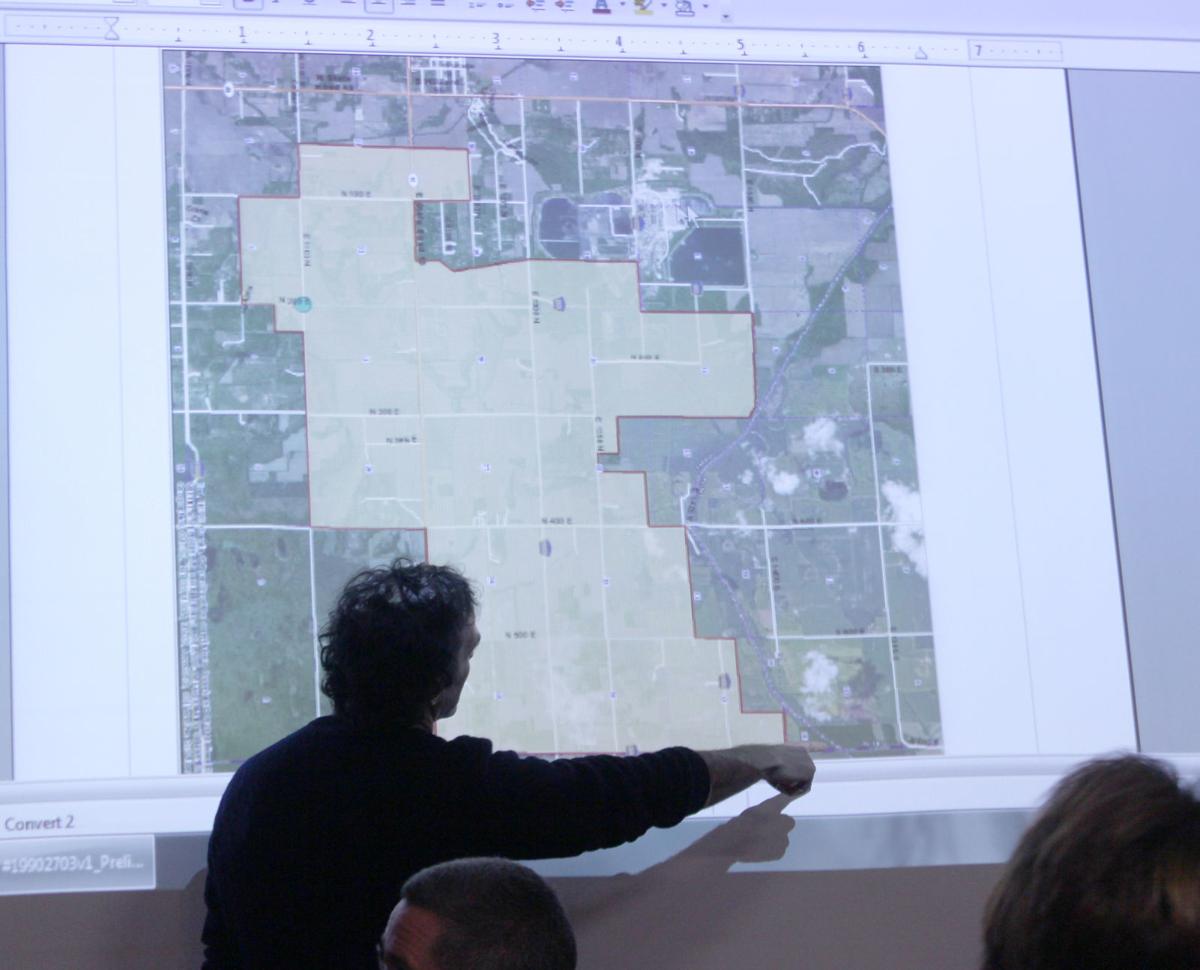 Justin Wolf, project designer for Orion Renewable Energy, explains the area the company is asking to be designated an “economic redevelopment area” or ERA, an area of approximately 2,200 acres, as the first step to a tax abatement request. The map is sideways, with north facing east, etc. 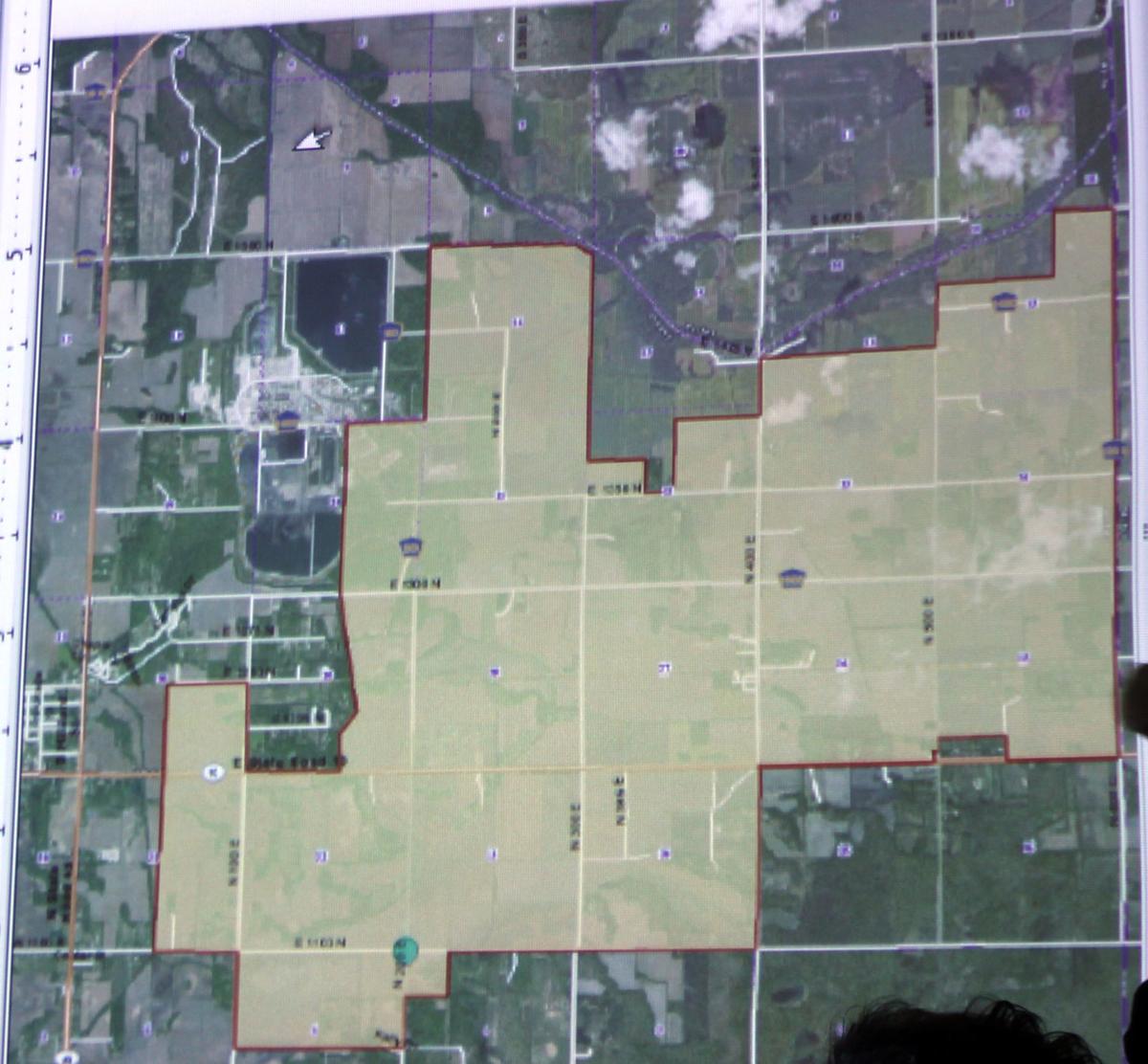 The area highlighted on the map (rotated to show proper directions) shows the acreage Orion Renewables asked to have designated a economic redevelopment area to the east and south of NIPSCO’s Schahfer Generating Plant.

RENSSELAER — On Tuesday night, the county council approved the first step towards a tax abatement for a proposed large solar farm to be located in Kankakee Township, south of the NIPSCO plant. Orion Renewable Energy Group, LLC., was represented by project designer, Justin Wolf, who had appeared before the council in December to discuss the company’s plans.

Wolf brought with him a preliminary resolution for the council that designates the area Orion Renewable plans to use to build the solar energy panels as an “economic redevelopment area.” He plans to come back to the council in March with a proposal for a tax abatement, which the council will consider at that time. The board was given two scenarios for an abatement using a $100 million example for either a sliding abatement that would gradually increase the property tax on the company or a complete abatement for a span of 10 years.

Umbaugh & Associates, an Indianapolis based CPA firm used by many municipalities to research and do studies on costs analyses for different projects, was hired by Orion Renewables to study the impact of a tax abatement to the county and the company. Matt Eckerle, with Umbaugh, explained their analysis was done without consideration to anything else going on in the county and the township, including the closure of the NIPSCO coal burning generating plant in Wheatfield. Orion Renewables is actually looking at a $300 million project, so all of the numbers could be multiplied by three.

Wolf said with the 100 percent abatement over 10 years, the company would “carve off” half of the savings and redirect it back to the county to use as they see fit. “Orion doesn’t have a preference either way,” he said. “It’s just something to think about.”

He explained he has been working on this project for three years, and this is the culmination of his efforts. He said the company has been working with land owners in the area to partner with them for the project. Most of the land is leased, he said, and others are waiting for the county council’s decision before signing. Orion will build a substation first, sometime in fall or winter, then he said it’s like an assembly line for construction with one crew putting in one part of the solar panel construction, followed by another with the construction taking about six months, start to finish. Currently, the company has sent an request to NIPSCO to buy the energy produced by the solar panels, and sending the power through the transfer station at the Schahfer plant, which will be close to the planned solar fields.

Right now, Wolf said, NIPSCO is focusing on wind energy before turning their attention to solar. He expects they will be ready to consider solar before the expected final shutdown of the coal burning operation in 2023. “We are well positioned to respond to them,” he said when NIPSCO turns their focus to solar. He said NIPSCO will look at companies that are shovel ready and they would be from turning dirt to being operational within six months.

Rein Bontreger, council president, said they had been asked to not only look at local employment possibilities with this abatement request, but to look at the landowners instead. He asked how this would benefit them. Wold said there will be about 30 landowners when it’s all done, and there is a lot of sand in this area where farming can be a challenge. He said he has heard this from the landowners. There will be significant income generated in the area relative to where it was before, he said. He added this will be built in Kankakee Township, which will be hardest hit when the NIPSCO plant closes.

He said by bringing in this renewable energy, it would be a strong attraction for other companies looking to locate in an area that has this “green” energy. He said it is also important for millenials who could make this county a bedroom community for Chicago and for retirees.

The biggest beneficiary to the solar farm tax revenue would be the KV School Corporation, Wolf said.

The fact that the school corporation is itself planning to lease land to Wabash Valley Energy Marketing, Inc., which supplies power to Jasper County REMC, was not discussed during the meeting.

Councilman Gerrit DeVries, a strong opponent to wind turbines in the county, asked about the science behind using batteries for storage of the solar power, which was part of the proposed solar farm. Wolf said the technology now is similar to that used for electric powered vehicles, but it is rapidly advancing. He said solar energy is not an all or nothing portion of electric generation. Utilities, like NIPSCO, need to diversify with wind, natural gas, solar and coal. Combined, Wolf explained, the utilities have a much larger advantage, especially during peak electrical demand periods. Solar is the cheapest option, he said, for utilities when electricity reaches its peak in the summer months, and that is the best time for solar to produce energy as well.