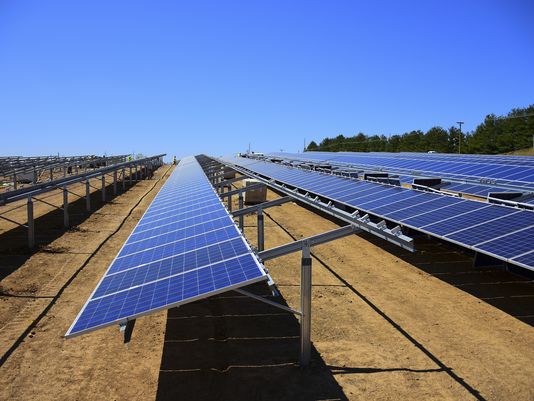 The company plans to erect 12,000 solar panels in phases about two miles west of Simpsonville along Interstate 64

People living near the proposed 35-acre, 4-megawatt solar farm in Shelby County objected to its location. But PSC Executive Director Talina Matthews wrote that the commission does not have jurisdiction over its location because the facility will produce less than 10 megawatts of power.

The other key issue is whether the parent of Louisville Gas & Electric and Kentucky Utilities had structured its new, voluntary subscription-based Solar Share program's finances so that customers who don't participate won't pay for it.

Solar Share "allows for cost recovery and a return on invested capital by participants so that there is minimal cost sharing by non-participants," Matthews wrote in the order posted on the PSC website Friday.

Solar power advocates also complained that customers are to be charged up to four times the market rate of solar power in Kentucky.

Customers will pay a $40 subscription fee and then a monthly fee of $6.29, per 250-watt increment. That's enough to generate between 17- and 37-kilowatt hours per month, compared to a typical customer's home use of about 1,000-kilowatt hours a month, officials have said. Customers will also get a credit on their bills for electricity generated from those solar panels.

The company plans to erect 12,000 solar panels in phases about two miles west of Simpsonville along Interstate 64 in a pasture near the corner of Wooded Lake Drive and Conner Station Road. The area is a mix of residential homes and farms.

"I'm just really disappointed," said Gerald Karem, who lives on a farm near the planned solar installation. He and his neighbors described the facility as an industrial eyesore that will lower property values.

The project is exempt from local zoning laws.

Karem on Thursday requested a hearing before the commission. But the commission determined the rules do not allow for that. So Karem said he and some of his neighbors plan to explore their legal options. "I should have gone out and gotten an attorney from day one," he said.

LG&E and KU spokeswoman Liz Pratt said the company is "excited to offer this new service to our customers interested in supporting more local solar in Kentucky."

She also said the company has plans to add to the landscaping at the property. "We want to be a good neighbor," she added.

All eight sections of the solar farm could support enough electricity to power about 450 typical homes, she said. Based on anticipated subscription levels, the company expects to serve about 1,400 customers when fully built out, Pratt added.

Customers who want to sign up should let LG&E and KU Energy know by filling out a form on the company's website, https://lge-ku.com. Search for Solar Share.