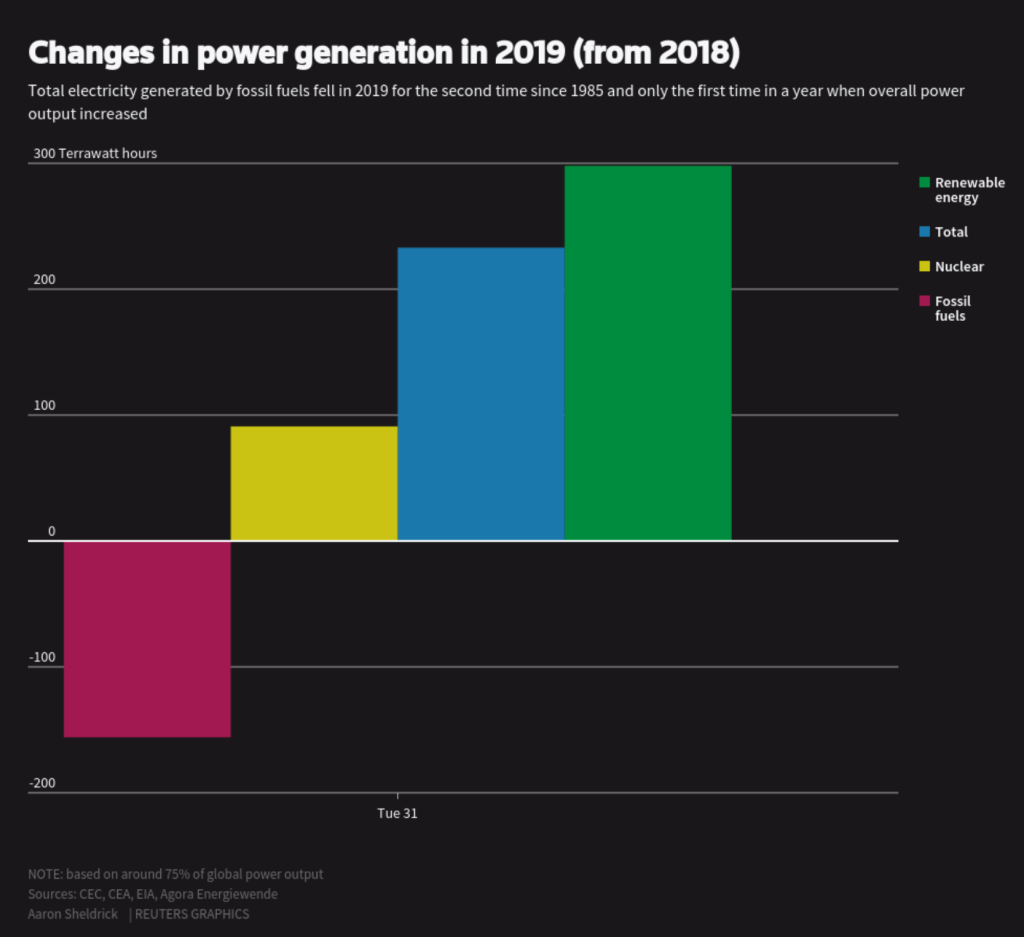 TOKYO, March 4 (Reuters) - The use of fossil fuels such as coal and oil for generating electricity fell in 2019 in the United States, the European Union and India, at the same time overall power output rose, a turning point for the global energy mix.

Those countries and regions are three of the top four largest producers of power from fossil fuels. The declines suggest the end of the fossil fuel era could be on the horizon, said Tomas Kaberger, an energy professor at Chalmers University of Technology in Sweden, who provided the power generation data to Reuters.

Kaberger, who is also the chair of the executive board for Japan’s Renewable Energy Institute and a member of the board at Swedish utility Vattenfall AB, provided data covering more than 70% of the world’s power generation that showed for most of 2019 the amount of power sourced from fossil fuels dropped by 156 terawatt hours (TWh) from the year before. That is equal to the entire power output of Argentina in 2018.

The data also indicates that renewable power generation increased at a faster rate than the overall growth in power output for the first time, rising by 297 TWh versus 233 TWh for overall output, Kaberger said.

“It is economics driving this as low-cost renewable electricity outcompetes against fossil and nuclear power plants,” said Kaberger.

With electric vehicle usage surging and their batteries being increasingly recharged by renewable electricity supplies the decline of fossil fuels is likely to accelerate, he said.

“New renewables are even cheaper than oil per unit of energy electricity generated and even fuels produced from electricity will outcompete against fossil fuels at increasing speed in transport, heating and industry,” he said.

Kaberger relied on data from official sources such as the International Energy Agency and the U.S. Energy Information Administration that covered China, India, the EU, the U.S., Japan and the rest of the Organization for Economic Co-operation and Development (OECD), or around 75% of global electricity output. The data for Japan and the OECD members outside of the EU and the U.S. were only through to November.

China, the world’s biggest power producer, was the exception to the decline, with power produced by fossil fuels rising by 120 TWh in 2019, though renewables outpaced that with an increase of 157 TWh, the data showed.

Fossil fuel power generation last declined in 2009 after the global financial crisis, at the same time that overall global electricity output fell, according to BP’s Statistical Review of World Energy. That year was the first time overall power output dropped since BP began publishing the review in 1985.

The shift from fossil fuels, especially coal, has been driven by countries trying to implement their commitments under the Paris Agreement on climate change and reduce pollution.

In the U.S., power companies closed down 15.3 gigawatts of coal capacity last year as renewables surged, while in India electricity generation from coal fell in 2019 for the first time in a decade.

The contribution of nuclear to the global power mix rose last year by 91 TWh as Japan restarted more reactors following the shutdown of sites after the 2011 Fukushima nuclear crisis, the data showed.