In the Sunshine State, a Power Struggle Over Solar Plays Out; Indiana Needs 3rd party PPAs

WSJ: In the Sunshine State, a Power Struggle Over Solar Plays Out

Liberal environmentalists and tea-party conservatives, among others, unite to press state to open window for more renewable energy

Florida is one of several states that ban so-called third-party sales from non-utility companies to install solar panels on buildings, a dynamic that some say has a state with plenty of sunshine lagging behind in installed solar-power capacity.

A broad political coalition, from liberal environmentalists to tea-party conservatives, has banded together in Florida to press for something that ironically is in short supply in the Sunshine State: solar power.

The group, which also includes business owners, libertarians and Christian conservatives, launched a campaign in January to place an initiative on the state’s 2016 ballot that would eliminate restrictions it says are suppressing the solar industry and protecting utilities from competition.

Though Florida is the third-most-populous state in the country—after California and Texas—and has plenty of sunshine, it ranks 13th in installed solar capacity, with 229 megawatts, compared with 8,544 megawatts in top-ranked California, according to the Solar Energy Industries Association. Pennsylvania, ranked 12th, has 240 megawatts of capacity.

“Florida is the best solar market in the eastern United States, and it’s clearly underperforming,” said Stephen Smith, executive director of the Southern Alliance for Clean Energy, which promotes renewable energy and is a member of the coalition, Floridians for Solar Choice.

Florida is one of only five states that prohibit so-called third-party sales from non-utility companies to install solar panels on residents’ or businesses’ rooftops and sell them power. Under such arrangements, consumers can avoid the upfront costs of installing solar arrays and lock in potentially cheaper electricity rates, while providers can earn back their investment and a profit over the long haul.

Currently, Florida consumers can buy electricity only from utilities. The coalition’s initiative, which requires more than 680,000 signatures to qualify for the ballot, would remove that restriction and authorize third-party sales.

It is the latest standoff between the amalgam of renewable-energy advocates across the country and utilities at a time of rapid growth for the solar industry. In the first three quarters of 2014, 50% more solar power came online than in the same period in 2013, according to the Solar Energy Industries Association.

Florida alliance members say they resorted to a ballot effort because elected officials in Florida have failed to develop a comprehensive clean-energy policy and utilities have used their monopoly position and lobbying muscle to stifle competition from the solar industry.

Utilities have long argued that customers should go through them for solar energy because they should help pay for the cost of maintaining the grid, which they still rely on for at least part of the day.

Sterling Ivey, a spokesman for Duke Energy Florida, which provides electricity in the central and northern part of the state, said the company was committed to working with lawmakers “to achieve energy policies, incorporating solar, that are fair and beneficial to all of our customers.” 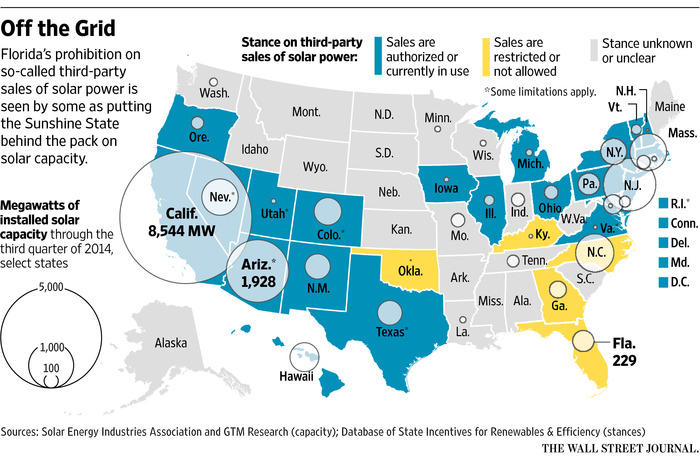 Cynthia Muir, a spokeswoman for the Florida Public Service Commission, which regulates the state’s utilities, said the commission was “working with all stakeholders to develop a strategy to promote solar effectively at a reasonable cost.” She pointed to recent announcements by utilities such as Florida Power & Light Co., a unit of NextEra Energy Inc., to build more solar farms.

The political dynamics unfolding in Florida have played out in other states. In Georgia, tea-party groups joined forces with the Sierra Club to help persuade the state’s utility regulators in 2013 to require Georgia Power to boost rooftop solar.

One of the activists— Debbie Dooley, who co-founded the Atlanta Tea Party—launched a group called Conservatives for Energy Freedom last year that is part of the Florida coalition. The organization is pursuing similar alliances to battle utilities in states including Indiana and South Carolina.

In Arizona, another group—Tell Utilities Solar won’t be Killed, or TUSK— focuses on promoting solar power to conservatives and was among a diverse array of groups that beat back a proposal in 2013 to charge the state’s solar customers steep fees. TUSK is now active in nine other states, including Colorado and Utah.

While liberals tend to emphasize solar as a renewable-energy source that can reduce the country’s reliance on fossil fuels, conservatives often cast it in terms of freedom of choice.

Meanwhile, Republican state Sen. Jeff Brandes has drafted legislation that would reduce taxes on businesses seeking to install solar panels on rooftops and allow them to sell energy to adjacent establishments.

Mr. Brandes said Florida is slowly coming around. “We have these regulated monopolies that have worked very hard over the years to keep solar out,” he said. “And now you’re seeing Floridians rise up and demand that they address solar.”