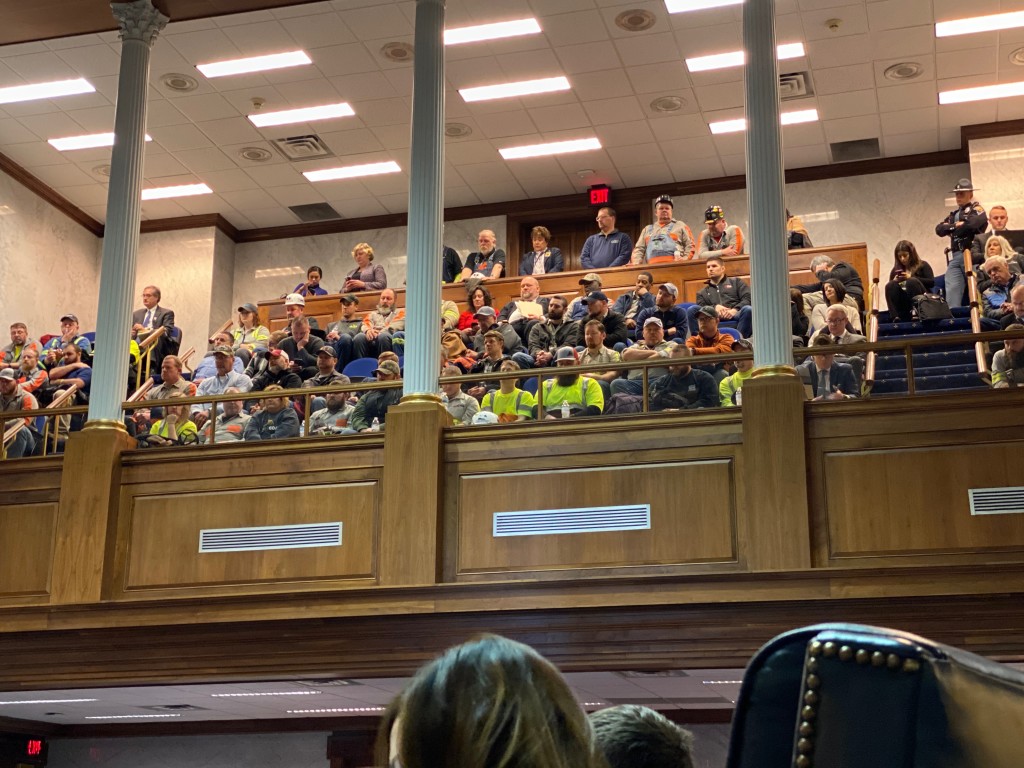 Photos from Indiana Senate Chambers and Gallery during Senate Utilities Committee hearing on HB 1414 on 2/27/2020. Photos by Laura Ann Arnold and Shannon Anderson.

As renewable energy and natural gas costs decline, it's harder to justify coal energy. Many utilities also are closing coal-generation plants in Indiana and elsewhere.

What started as a bill that would extend the life of coal-powered electricity in Indiana and likely raise consumer costs in the process took a turn Thursday.

A state Senate committee approved the measure 8-2, but not before passing an amendment that would accelerate the sunset, or expiration, date of the bill from May 2021 to the end of this year and scrap other provisions that would have hit ratepayers in the wallet.

"I was trying to put into public policy a bill that I could support," said Republican state Sen. Jim Merritt, chair of the Senate Utilities Committee that passed the bill and author of the key amendment that significantly changed it. "Because the way the bill came into my committee, I could not support it."

It came in as a bill that would raise the bar — and likely prolong the process — for utilities wanting to close power plants, at a time when coal-fired power plants are the only ones closing.

Experts say market forces that favor natural gas and other alternative energy sources such as wind and solar are largely responsible for driving these plants to close, and many critics have called this bill's efforts to delay retirements a coal bailout.

The bill narrowly passed the House by a vote of 52-41, with Republican House Speaker Brian Bosma voting.

Merritt said he knew this bill was important because the speaker doesn't vote on every bill, which is why Merritt had nearly 25 meetings in the last couple weeks on the measure, House Bill 1414.

Here's how the coal bill changed

Merritt's amendment removed language that would allow utilities to increase their coal reserves and require them to keep coal plants operational, both of which would likely translate into raised rates for customers. His amendment also moved up the bill's sunset date by four months, to Dec. 31, 2020, meaning it would be in effect for only six months.

More specifically, previous language in the bill also would have required utilities to keep these plants in tip-top shape, a cost that would have been passed on to customers, even if they planned to close the facility in the near future. That was removed.

The bill also would have let utilities double the amount of coal they can keep in storage and pass that cost on to customers, which would have gone to benefit the coal industry. Some legislators have said the stockpile change would be voluntary and that most utilities wouldn't take advantage of it.

Others have called that into question.

In a current and ongoing rate case for Duke Energy before the Indiana Utility Regulatory Commission, the company is asking to raise customers' rates. During testimony as part of that case, one Duke official said that the company has already purchased more coal that it projects it will need for the coming couple of years — not following its own internal purchasing guidelines.

When asked why in the testimony, the official said that they had "asked not to purchase those tons, but those individuals were financially struggling and was looking for opportunities." The official added that having diversity for coal suppliers is important for negotiating, which Soliday has also pointed to.

In fact, roughly 40 coal miners in their denim overalls with reflective stripes were in attendance at Thursday's committee meeting. The meeting was held in the full Senate chamber, with more than 100 people in attendance.

Miners, along with the Indiana Coal Council and those who spoke on the council's behalf, made up the majority of individuals who spoke in favor of the House version of the bill, before the changes made by Merritt's amendment.

Coal miners who lose jobs would get help

HB 1414 was amended before it left the House to include provisions that would provide resources and training for coal miners that had lost jobs. Another amendment that passed Thursday, offered by Sen. Eric Koch, would expand such resources and support to employees at coal-fired facilities as well as those in the supply chain for such facilities.

Just last month, an Indiana coal mine announced it would stop production, leaving 90 employees without jobs. And Hoosier Energy, a rural electric cooperative, announced plans to shut down a coal-fired power plant, which will leave roughly 180 people without jobs — though the company has said it will help provide training and resources to those individuals.

Many legislators and groups, even those who oppose the bill as a whole, are in favor of providing such support for miners. Still, they said, this should be the focus of the conversation, and not how to keep coal going.

Environmental bills: What has happened this session

Some had previously expressed concerns that the bill's sunset date — previously May 1, 2021 — could be extended during the next session. Soliday said that date would allow the 21st Century Energy Task Force, which he co-chairs, to submit its recommendations and for the legislature to have one session to act on it.

Merritt said the new sunset date, Dec. 31, 2020, coincides with the completion of the task force and its report with recommendations due to the legislature.

'We have a really watered-down bill'

Many groups that have previously spoke in opposition to this bill — including the Indiana Industrial Energy Consumers group, the Indiana Conservative Alliance for Energy, the Indiana State Conference of the NAACP, the Sierra Club and the Hoosier Environmental Council — said they support the amendments, but still question whether this bill is needed.

"Yes, we have a really watered-down bill, and a bill that will only be in effect for six months," said Kerwin Olson, executive director of consumer advocacy group Citizens Action Coalition. "That sort of asks the question of why this is needed."

Soliday and those who spoke in support of the House version of the bill said that it presses pause and brings more scrutiny to these decisions being made. They said that having additional hearings and requiring the state's utility regulatory commission to issue an opinion on a proposed closure would ensure closures are in the public interest.

"Please, take the time to study it," said Mike Nase, an environmental lawyer who has previously spoken on behalf of the Indiana Coal Council. "This bill is about transparency and not racing to retire these plants."

Merritt's amendment, however, removed the process necessitating additional involvement by the state utility regulatory commission. Instead, he replaced it with language that a proposed retirement must align with a utility's integrated resource planning process. That well-established process involves extensive modeling and several hearings for the public to weigh in.

Indiana's five investor-owned utilities, through the Indiana Energy Association, previously spoke in opposition to HB 1414. They did not testify during Thursday's hearing, so their thoughts on the new amendments aren't clear.

The Indiana Chamber of Commerce, which had previously opposed the bill, said it supports the amended version.

Soliday did not speak during the meeting about his thoughts on the amendments. In closing, Sen. Mark Messmer, a sponsor of the bill, said he "appreciates the heart of the bill and Soliday’s efforts to put a pause on plant closures while the task force completes its work."

He added that with the amendments, concerns regarding bigger customer bills and extending the sunset date have been addressed.

Sens. Mark Stoops, D-Bloomington, and J.D. Ford, D-Indianapolis, cast the two votes in opposition of the bill. Many committee members explained their votes, some saying that they previously planned to vote no but after Thursday's changes and testimony that they were voting to move the bill forward.

The bill will now head to the full Senate floor for a vote, where further changes could be made. If the bill does not make it off the Senate floor or Soliday does not accept the amendments made, the bill could head to conference committee. That is a joint committee appointed by the House and Senate to resolve disagreements on a particular bill before it could be sent to the governor for final consideration.

IndyStar's environmental reporting project is made possible through the generous support of the nonprofit Nina Mason Pulliam Charitable Trust.