Indiana Court of Appeals ruled the IURC erred in NIPSCO TDSIC; Asks for a “do over” 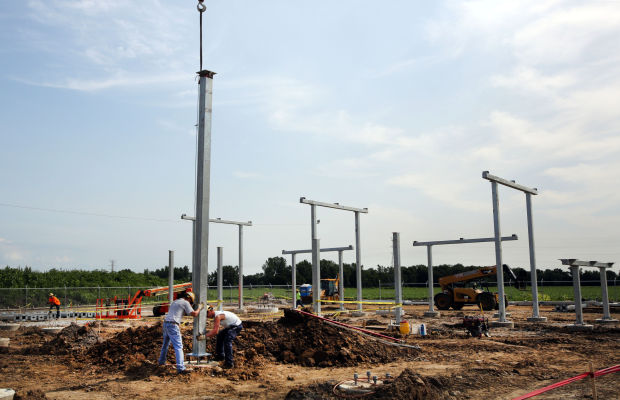 NIPSCO workers set steel beams in July at a new substation under construction south of Valparaiso. It is part of the utility's $1.2 billion electric modernization project, which was dealt a setback by the Indiana Court of Appeals this week.

The Indiana Court of Appeals on Wednesday dealt a setback to NIPSCO's $1.2 billion electric modernization plan, issuing a ruling that could affect similar plans by other utilities.

The court ruled the Indiana Utility Regulatory Commission erred in several respects in its Feb. 17, 2014 orders approving NIPSCO's plan. It affirmed some parts of the IURC's orders, including its interpretation of a 2 percent cap, which is a key victory for the utility.

In addition to authorizing the $1.2 billion in improvements in its February orders, the IURC approved customer charges to pay for them. Those come in the form of yearly rate increases that will total 4.9 percent by 2020, according to NIPSCO estimates.

NIPSCO and its challengers on Wednesday were still examining how the ruling might affect both the improvements and the customer charges, some of which have already been collected.

"We are analyzing today's order to determine the next steps," NIPSCO stated in an email to The Times. "The projects we've identified are necessary in modernizing our system for the future. The level of detail the Court of Appeals has requested is available, and we are confident it supports our 7-year plan."

The IURC's February 2014 order had been challenged by some of NIPSCO's largest industrial customers as well as the Indiana Office of Utility Consumer Counselor.

NIPSCO brought the case for its electric modernization plan before the IURC under legislation passed by the General Assembly in 2013. It was the first utility in the state to do so.

The industrial group challenging the IURC's orders before the Court of Appeals was composed of BP Products North America, Praxair, USG Corp., and ArcelorMittal USA.

"We are pleased with the Court of Appeals decision finding NIPSCO's plan really failed to follow the requirements of the statute," said Jennifer Terry, an attorney with Lewis & Kappes, the law firm representing the industrial group.

Terry said it is possible the industrial group could ask the IURC to order NIPSCO to refund customer charges already collected under the IURC's orders.

The industrial customers have long contended the utility should be more specific about projects it intends to undertake. The court sided with them, ruling the IURC was not provided with enough detail on the projects to approve the special charges to pay for them.

Since approving NIPSCO's electric plan in 2014, the IURC has also approved a NIPSCO natural gas modernization plan of about $800 million. It also approved a similar Vectren request for a $650 million program. And the commission is considering a $2 billion Duke Energy electric modernization.

The IURC will now have to reconsider major parts of its NIPSCO orders and may have to reopen the case. Any of the parties in the Court of Appeals case could also appeal to the Indiana Supreme Court.

The industrial group had also argued before the court that the IURC had erred in ruling utilities could hike customer bills by an amount equal to 2 percent of annual retail revenues in each year of their seven-year plan.

The industrial group contended that would allow utilities to increase rates up to 14 percent by the end of the plan, which is a far bigger increase than even in a typical rate case. The court ruled against the industrial group, finding the IURC had interpreted the statute correctly.

The court sided with the Utility Consumer Counselor in ruling that the same distribution and transmission factors should be used for industrial and residential customers in setting the new charges.

Click HERE for a link to the Court's decision> http://www.in.gov/judiciary/opinions/pdf/04081503mpb.pdf

From the Indiana Office of Utility Consumer Counselor (OUCC) concerning other TDSIC cases: