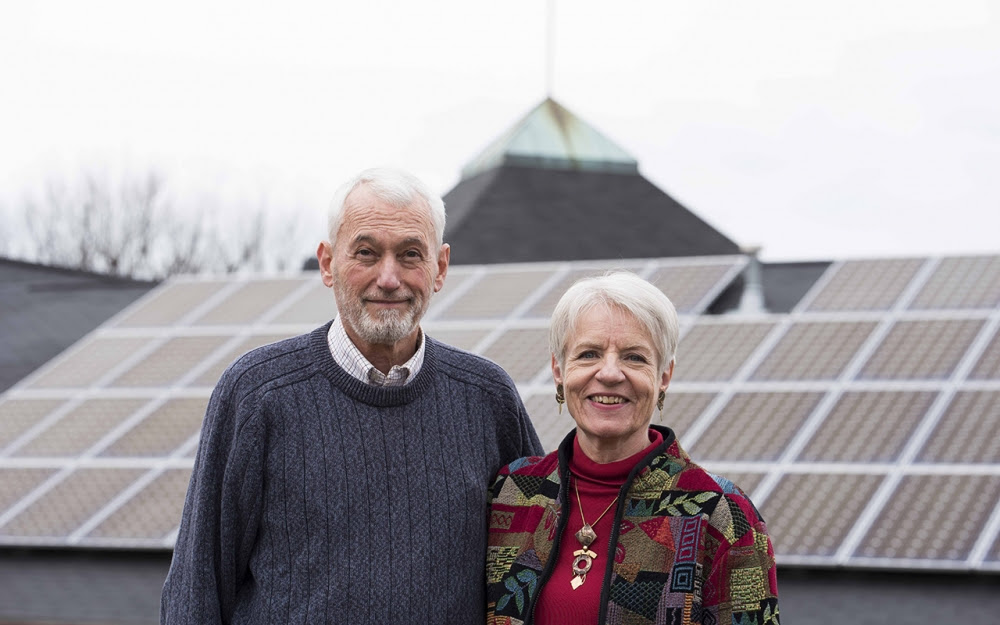 When oil spills in the ocean, it can cause devastating pollution. The resource does damage to its surroundings, but when sunlight spills down from the sky, it’s not a disaster.

Darrell Boggess smiles when he finishes his analogy. It’s just a sunny day.

So a sunny day like last Saturday — a rare bright afternoon in January with temperatures in the 60s — must be an exceptional spill of clean energy. On days like this, when the sun is beating down, solar panels soak up sunlight. During the day, though, the solar user probably won’t need all that energy, and so it can be sent back into the energy grid.

Boggess, a solar user and member of the Solar Indiana Renewable Energy Network, a local group that educates and promotes solar usage throughout the state, said his neighbors may use energy produced by his panels. He’ll be compensated for this at the retail price for solar energy.

Then at night or on cloudy days when his solar panels can’t provide him sufficient energy, the system pulls back from the grid, and he’ll get billed for this at the retail price.

This concept — the give and take of energy to and from the grid and the subsequent adjustment of a user’s energy bill — is known as net metering. Net metering allows those who generate their own electricity to be compensated at the retail rate for excess they don’t use.

But if a new bill passes this legislative session, it could be illegal in 10 years.

Senate Bill 309, authored by Sen. Brandt Hershman, R-Buck Creek, would outlaw net metering completely after 2027 and forbid net metering for any customers before 2027 after 1 percent of all energy used in a particular utility company is generated by a customer-owned source, like a solar panel, rather than by the utility company.

Hershman did not respond to requests for an interview in time for this story to be published in order to justify his reasoning for the bill.

Without net metering, customers would be compensated at dramatically lower wholesale rates for energy they send back to the grid rather than retail rates.

The bill includes a buy-all-sell-all provision. When users produce energy in their panels, that energy would go straight into the grid and the user would be compensated at the wholesale value only to have to buy back the energy at a higher retail value.

Solar users say this would deal a huge blow to the clean energy industry. Some people choose to use renewable energy out of concern for the planet’s well being, Boggess said. But some choose to use it because it saves money. Boggess thinks getting rid of net metering would get rid of many of the second type of customer and cause solar companies to take their business away from the state.

“There is a predictable consequence,” Boggess said.

A bill similar to SB 309 was introduced in the House two years ago but didn’t advance. The Hoosier Environmental Council, an Indiana environmental advocacy group, was aware of and involved in fighting against the last one and is keeping an eye on the current one. Rumors are flying around about a potential hearing date for SB 309, but one hasn’t been published yet on the Indiana General Assembly website.

Jesse Kharbanda, executive director of HEC, said net metering’s principal purpose is to promote non-polluting forms of energy. Several  government-commissioned studies have shown the value of solar to the energy system is worth more than the retail rate of electricity, Kharbanda said.

Not only are solar panels zero-polluting sources on the grid, but they also help to improve the overall energy security on the grid, he said.

Kharbanda has an idea why someone may not support the concept of net  metering.

Part of it is a misconception that net metering is a subsidy for using solar power, but this is not accurate, he said.

Boggess dispels this misconception, too. The argument from electric companies that net metering isn’t fair is just not true, he said.

“It’s worse than a myth,” Boggess said. “It can’t happen that way.”

He also said studies have shown the net value from net metering is worth more than what the user gets compensated. Solar users invest thousands of dollars in equipment that utility companies don’t have to buy, Boggess said. It saves money for the whole grid.

This backlash to solar energy usage isn’t specific to Indiana. According to a post on the Brookings Institution, a think tank and research group, utility interests in several states have reached out to legislators to try to convince them that net metering is actually a net cost to the grid.

An extreme example from the Brookings article shows how drastically an end to net metering could affect the solar usage in a state. In 2015, the Nevada Public Utilities Commission substantially cut the state’s net-metering payments and caused the three largest providers of rooftop solar panels in the state to completely leave Nevada’s market.

The effect was immediate. New residential solar installation permits took a nosedive and went down 92 percent in 2016’s first quarter.

SB 309 would not immediately cut off net metering to this degree, so the effect may not be as drastic here,  Kharbanda said. However, it’s still a cause for concern and may have a chilling effect on investment.

In contrast with the rest of Indiana, Bloomington is “kind of off the charts” for solar usage, said Woodie Bessler, also a volunteer with SIREN.

The city of Bloomington, too, is concerned about this bill, said sustainability coordinator Jacqui Bauer. In contrast with Hershman’s idea, Bloomington recently announced their Solarize Bloomington Campaign, an initiative to install solar panels on some city buildings and to work with solar installers in offering a discount to local residents and businesses.

Bauer said panels will be installed on City Hall and the police headquarters, with hopefully more additions to come in the future.

According to a December press release, the new City Hall system will provide almost 40 percent of the building’s total energy needs, which will in turn save Bloomington and local taxpayers more than $35,000 each year. Interested parties can get involved by going to tinyurl.com/solarizebloomington.

The release says Bloomington will work with SIREN and solar installers Whole Sun Designs and Solar Energy Solutions to offer a discounted rate of 2.62 per watt. Nationwide, the average is about 3.50 per watt, Bauer said.

At a Monday morning meeting regarding the program, Boggess said he learned in just one month, more than 200 people have signed up for Solarize Bloomington.

Indiana’s slogan is “the state that works.” If this is true, the state needs to make it possible for solar companies to continue their work in the state, Boggess said. The underlying issue with the bill is a question of values and priorities, he said.

“Does the state of Indiana want to encourage more renewable energy?” he said. “If the answer is yes, well, this bill takes you the other direction.”

Please note All comments are eligible for publication in The Indiana Daily Student.