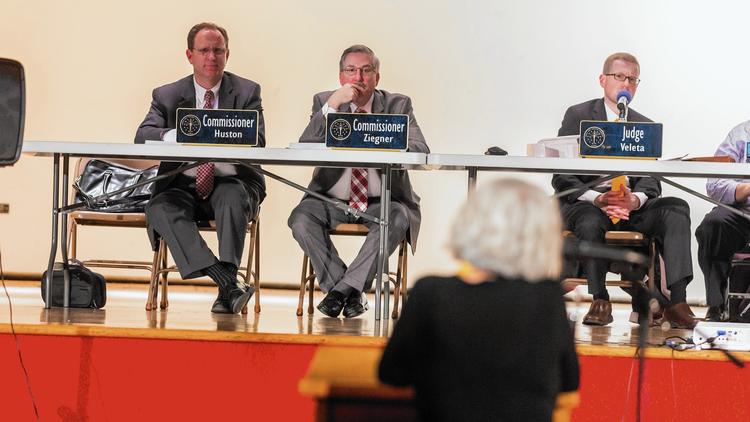 Commissioners from the Indiana Utility Regulatory Commission (IURC) listen as members of the public voice their concerns over a requested rate increase by NIPSCO. (Jim Karczewski / Post-Tribune)

Northwest Indiana residents may not have packed the Hammond High School auditorium for the Indiana Utility Regulatory Commission's hearing on a proposed NIPSCO rate increase, but those who did shared the same sentiment:

Everyone from pastors to politicians attended the Monday night hearing to try to ensure the utility company won't institute a $9 price hike – to $20 from $11 -- to its monthly flat rate.

The increase, if approved, would give NIPSCO $126.6 million in which to work, according to the Indiana Office of Utility Consumer Counselor.

Many of the people who came to remonstrate against the increase were on fixed incomes. Mary Ellen Slazyk, of Hammond, said she gets $694 a month from Social Security.

"Last month, my bill was $76.44; that's no problem. This month, the bill is $289.29, and this is just the beginning of winter," Slazyk said, adding that she did receive a one-time payment assistance of $475 from NIPSCO and a temporary rate reduction last year. "If (NIPSCO isn't) profitable, maybe someone else should take it over, because (its executives) aren't living paycheck-to-paycheck like many of us are."

The Rev. Asher Harris and the Rev. Dwight Gardner, both of Gary, pointed to their city's unemployment rate and that their congregations are predominantly older and on fixed-incomes as well. Theodore McClendon, also of Gary, called the proposed hike "an affront to people."

"There's an issue of skepticism here. We have no choices, no competition and no comparison or negotiation," McClendon said. "This is like a football coach from a major university; you know they make tons of money, so what if attached to their student fees was this man's severance?"

NIPSCO spokesperson Nick Meyer said the company, contrary to predominant belief, isn't forward looking with its request. Rather, the company has to prove to its stakeholders that expenses and improvements it's made are justified.

"Our last rate hike was in 2011," Meyer said. "Our biggest cost is power generation, followed by labor costs. At the end of the day, we want to determine rates that are both fair to the customers and the company."

But Laura Arnold, president of the Indiana Distributed Energy Alliance from Indianapolis, doesn't understand how this hike can be fair when there's no way to tell how the company came up with the numbers.

"When (NiSource executives) presented these changes in September, they said that they could charge a full $83.95 in fixed-rate charges, but that by charging only a 'modest' $20, they were gradually introducing the hike. This is without any electric consumption," she said.

Arnold said the current standard with charging for utilities is a low connection fee and rising generation charges, so to change the flat rate so drastically – a move that 25 states are considering or will be within the next two years – will push those who can afford to "go off the grid" to do so more quickly. That would leave those who're least able to pay the fee, she said.

"The commission needs to find another way to look at this issue," Arnold said. "It really deserves a special study."

Meyer said all information and data is available to the public, but some, such as the rate formula, need to be requested.

Meyer said public hearings will be held until the February evidentiary hearing before the IURC. The decision should be finalized by late summer.

Michelle L. Quinn is a freelance reporter for the Post-Tribune.

NISPCO wants $20 per month, before you use ANY electricity!

NIX the FIX! Tell NISPCO NO WAY to a higher fixed charge!

NIPSCO wants to raise your electric rates by 11.4% and your monthly fixed customer charge by a whopping 81.8%! This amounts to a monthly bill increase for the average NIPSCO residential customer of $16.79 or 21.2%.

For the second time in 5 years, NIPSCO has filed a base rate case at the Indiana Utility Regulatory commission (IURC). NIPSCO monthly electric bills have already increased nearly 30% over the last ten years. At the same time, Hoosier households struggle with declining and stagnant wages and significant increases in the cost of energy, health care, food, and other necessities. Enough is enough!

NIPSCO wants to significantly increase your monthly fixed charge from $11 to $20. This is the amount  you pay regardless of how much energy you use.

According to  NIPSCO’s testimony, this is only the beginning. NIPSCO states in their testimony that it is their intent to gradually “increase the customer charge that applies to residential and small commercial customers,” going on to state, “the customer costs alone support a charge of $22.51, and the full fixed cost would support $83.95.” This would mean an eventual monthly fixed charge for residential customers of $83.95 whether or not you use a single kWh of electricity!

Charging more for using less through higher fixed charges disproportionately hurts households on low- or fixed-incomes.  It diminishes the longstanding principal of encouraging conservation.  It also imposes an unfair “tax” on farms, homes and businesses that choose to install solar panels, wind turbines, or other distributed energy technologies on their property.

NIPSCO blames the need to increase the fixed monthly charge on reduced energy sales as a result of increasing investments in energy efficiency and customer-owned generation like rooftop solar, as well as reductions in industrial energy usage due to factories closing and/or moving.

Customers should not be penalized for investing their own money to make their business or home more efficient or to generate their own energy!

There is one bright spot in the NIPSCO rate case.  NISPCO is asking to create a low-income program which will provide a one-time summer discount of $50 to help mitigate the impact of increasing bills on low-income households. All residential customers would pay a marginal charge of 20¢ per month to help keep the lights on in these homes. While the program does little to address the problem of monthly bill affordability and needs to be more robust, NIPSCO should be applauded for voluntarily proposing a program to help the most vulnerable among us.

This is the core of your electric bill - what you are charged for fixed costs and usage fees. This part of your NIPSCO bill makes up about 86% of your current total NIPSCO bill as of November 1, 2015.
Trackers: the other 14% of your
NIPSCO Electric bill not included in "rates"

These trackers, also called “riders,” are currently included in your NIPSCO bill and added to the average bill you see above. The amount collected through trackers changes frequently as some are adjusted quarterly, while others change on a semi-annual or annual basis. NIPSCO is asking to consolidate Riders No. 672 & 673 and also proposes to continue using all of the other trackers. How much the trackers will add to your monthly bill moving forward is unknown to everyone but NIPSCO.

Make sure to reference Cause Number 44688 in your comments!