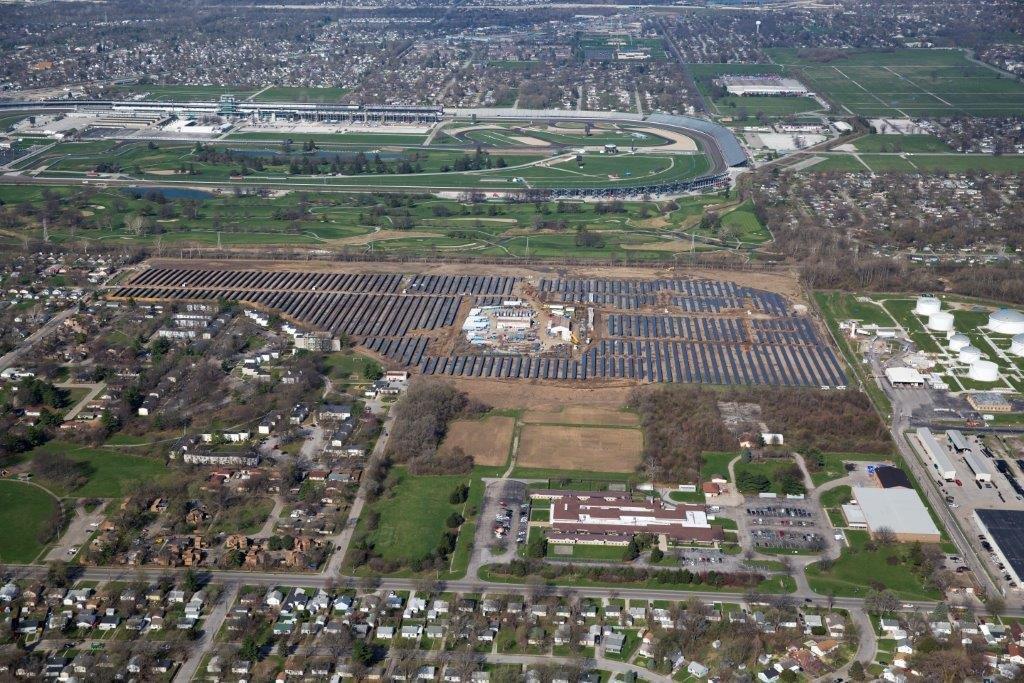 An aerial photograph of the new 9 MW solar farm located on the property owned by the Indianapolis Motor Speedway (IMS). The solar project was made possible by a voluntary feed-in tariff (VFIT) offered by Indianapolis Power and Light (IPL) called Rate REP. 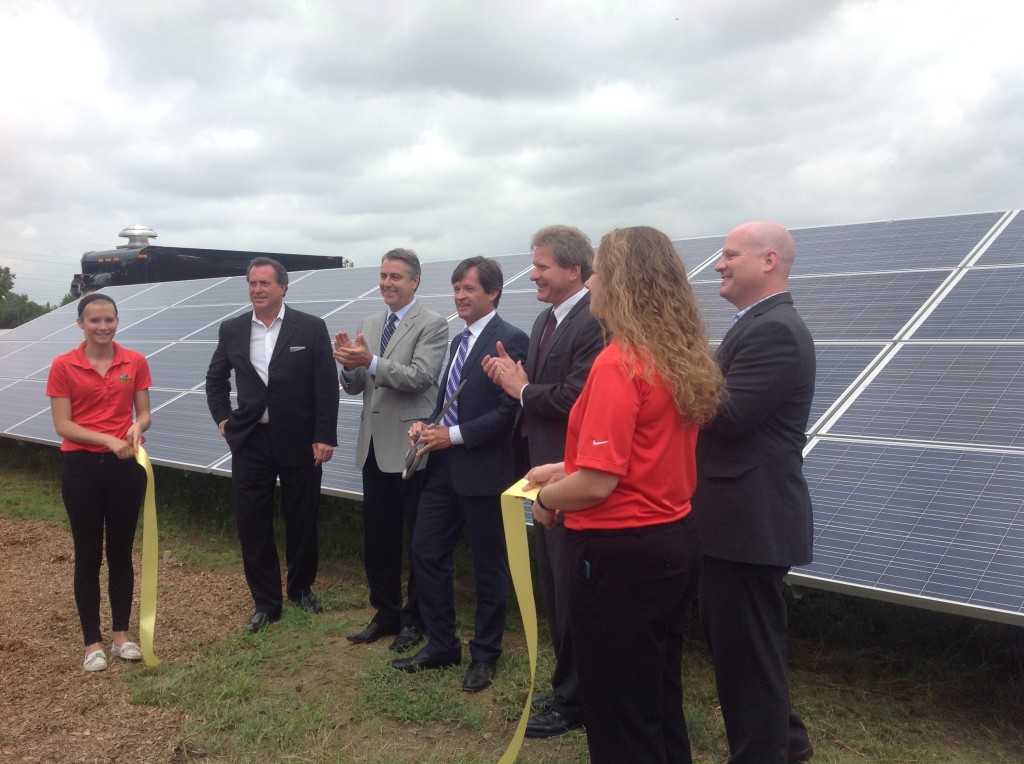 Noticeably absent today was IPL Engineer John Haselden who was on vacation this week but not forgotten in remarks made today at the project.

The IMS Solar Farm is the largest solar farm at any sporting facility in the world and features a total of 39,312 solar modules that generate 9.0 megawatts of power, which is equal to offsetting 10,288 tons of carbon annually. IMS used a portion of its 1,000 acre campus that was under-utilized and without a specific development plan.

“In 1909, the Indianapolis Motor Speedway was constructed in part to help advance the automotive industry, which at that time was the new technology of the day,” said J. Douglas Boles, Indianapolis Motor Speedway president. “Today, IMS is honored to be part of a partnership with IPL, SunWize and Blue Renewable Energy where innovation and technology are coming together to bring diversification of generation resources to this community.  The unused land at the IMS property just east of the race track has been transformed into a solar energy production facility that will provide an alternative source of energy to IPL customers.”

“Solar generation is an important component of IPL’s commitment to developing renewable generation resources,” said Ken Zagzebski, President of AES’ U.S. Strategic Business Unit, parent company of IPL. “The new IMS solar farm will be a constant reminder to those who visit the largest spectator sporting facility in the world of the creative solutions taking place here in Indianapolis to increase sustainability.”

“For over 100 years, the iconic IMS has broken its share of records. Now SunWize is honored to be part of the development and execution of this record-breaking solar project, the largest solar power system in the sporting world,” said Scott Tonn, Principal and Managing Director of Tonn Investments, an investor of SunWize Technologies.

The Indianapolis Motor Speedway has been the worldwide leader in motorsports entertainment since it opened in 1909. The facility has hosted the Indianapolis 500, the world’s largest single-day annual sporting event, since 1911, and also is the site of the Crown Royal Presents the “Your Hero’s Name Here” 400 at the Brickyard and the Red Bull Indianapolis GP. The NASCAR Nationwide Series and TUDOR United SportsCar Championship also race at the Speedway. IMS is the world’s largest spectator sporting facility and is the only venue to stage annual races in the Verizon IndyCar Series, NASCAR Sprint Cup Series, NASCAR Nationwide Series, TUDOR United SportsCar Championship and MotoGP. For more information, please visit www.ims.com.

SunWize sells, finances and builds sustainable energy systems for the public, private and residential sectors. For over twenty years, customers have selected SunWize to deliver sustainable energy solutions on time and within budget. Based in San Jose with offices in CA, NY, OR, HI and AZ, SunWize has deployed 100s of MWs of solar throughout the Americas. For more information, visit www.sunwize.com.

Indianapolis Power & Light Company provides retail electric service to more than 470,000 residential, commercial and industrial customers in Indianapolis, as well as portions of other Central Indiana communities surrounding Marion County. During its long history, IPL has supplied its customers with some of the lowest-cost, most reliable power in the country. For more information about the company, please visit www.IPLpower.com.