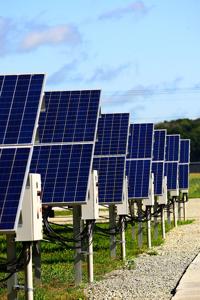 The Kokomo Plan Commission approved the development plan Tuesday of a solar park at the former site of the Continental Steel plant.

The approval comes after last month’s favorable recommendation from the city plat committee for the project, which will encompass roughly 26 acres at 1201 W. Markland Ave. and include 21,000 solar panels producing seven megawatts of energy.

The solar park – originally slated for completion by the end of 2015 and expected to cost $10 million – is being developed by Inovateus Solar, a solar-integration company based in South Bend that has developed solar-energy facilities in 26 states.

With the plan commission’s approval, Inovateus Solar is expected to begin construction work immediately and likely finish this fall, according to Austin Williams, an Inovateus Solar senior account executive who provided the timeline after last month’s plat committee meeting.

Williams could not be reached Wednesday for further comment.

Tuesday’s approval comes after the Indiana Utility Regulatory Commission approved a 20-year purchased-power agreement last August between the company and Duke Energy, which will buy the electricity and distribute it on the grid.

"The usage lines up with between 500 to 1,000 [homes], but one guy could use quite a bit more than the other so it's really, really hard to tell," explained Williams about the potential impact of the park's energy distribution.

Duke Energy Indiana’s operations provide about 7,500 megawatts of owned electric capacity to approximately 810,000 customers in a 23,000-square-mile service area, making it the state’s largest electric supplier, according to a Duke press release.

In relation, Inovateus Solar and city officials are working to finalize a lease which matches the 20-year term with Duke. Williams noted the lease could eventually be extended if the panels are still producing power.

“We looked for areas where there was plenty of power draw, plenty of power load, and energy infrastructure,” he explained about the decision to build a park in Kokomo. “With Kokomo as a high industrial area, that was top of the list to start checking out.

“When we starting finding these brownfield sites it really made a lot of sense, and then the city got really excited because they’ve been vacant for a while. Kokomo is a good choice because it’s really got the population we need and the energy infrastructure,” he added later.

Formerly, the Continental Steel site was listed on the Environmental Protection Agency’s list of most dangerous sites because of the high levels of toxic pollutants in the soil.

Continental Steel went bankrupt in 1986, and studies revealed the 183-acre property was contaminated with solvents, PCBs and lead. The Indiana Department of Environmental Management and the EPA spent more than $40 million to clean up the site.

City Engineer Carey Stranahan said in a previous interview the city is on board with the new facility, which will revitalize a piece of property that has been vacant for decades.

“The reason we were interested in turning this property into a renewable energy opportunity is because we can reuse property that previously compromised the environment,” he said. “Solar energy has a very low impact on the environment, which was attractive to us.

“This also reduces maintenance by the city. We will be receiving revenue, but we will not have to invest too many resources,” he said.

George Myers can be reached at 765-454-8585, by email at george.myers@kokomotribune.com or on Twitter @gpmyerskt.