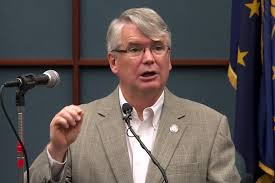 [IndianaDG Note: These are the remarks of Bloomington Mayor John Hamilton from 7/31/17 on the Solarize Bloomington efforts. His speech provides more details than my earlier post.]

About three weeks ago, an iceberg the size of the State of Delaware broke off from Antarctica. The New York Times referred to this collapse of the ice shelf as a “canary in the coal mine” for climate change. Frighteningly, the rupture of this iceberg follows a trend and scientists fear that the next one may have dramatic, devastating impacts on sea levels. In January of 2016 NASA and NOAA [National Oceanic and Atmospheric Administration] issued a joint statement, reporting that 2005 to 2015 had been the hottest years on record. And then 2016 topped 2015. I share this, not to scare you, but to remind everyone that regardless of what the President or Congress or our State House choose to believe -- climate change is real.  And I’ll note that more than 360 US Climate Mayors, representing more than 65 million Americans, including yours truly, have committed to support the Paris Climate Accord. That number is growing every week. For those of us committed to doing what we can, where we can to protect our planet -- the time to act is now.

Today, I’m proud to announce aggressive measures that the City of Bloomington will be taking over the next six months to expand our solar footprint, and to encourage others to follow suit. The people and institutions of our city spent ten years installing ONE megawatt of solar power. I’m challenging the city to add FIVE megawatts of power by the end of this year, and I’m asking the public to generate another 1 megawatt.

The timing of this is especially important in Indiana because of some recent distressing action taken by our state legislators and signed by our governor. Senate Bill 309, which went into effect on July 1st, drastically limited net metering and removed a major incentive for folks to take up solar energy. “Net metering” allows solar homes to sell their excess electricity back to the grid for their neighbors to use, and to earn retail rates as credit. Bill 309 cut those incentives to produce local power with renewable sources.

But under the bill, folks have until December 31st to get the current, better deal locked in place for 30 years. After that, incentives and the economic value of solar decreases. With the dangers posed by climate change, our state must do everything it can to encourage people to take up renewable, distributed energy. I strongly urge Governor Holcomb and our representatives at the State House to reconsider this misguided bill. In the meantime, we need to act, and we have and we will.

In January this year we kicked off the Solarize Bloomington initiative, reaching out to Monroe County residents to encourage them to consider rooftop solar, and offering training and even more importantly, wholesale prices on solar panels, in connection with the city’s acquisition program. Over 400 city and county residents expressed interest, which led to nearly 100 signed contracts and installed solar systems to date.  [Dawn and I are one of them -- show the app on phone, monitoring current production]. Thus far over 600 kilowatts of solar energy have been installed. Right now, we as a community are half way to generating 1 megawatt of energy. It took our city as a whole 10 years to get that point. We should be proud of that.

In order to acquire as much solar as possible prior to the December 31 deadline, then, Phase Two of Solarize Bloomington is now in progress, reaching out to surrounding counties. So far 140 households have expressed interest, and over 100 have attended the first two of six planned information sessions. You’ll hear more about that from SIREN in a few minutes. With the December 31st deadline imposed by the state, we are in a race to solarize Bloomington.

So, Solarize Bloomington is one major step toward expanding our solar footprint. But there is of course much more work to be done to protect our planet. In city government I’ve directed that we take a responsible and proactive approach to evaluating opportunities to reduce costs, become more efficient, and modernize our infrastructure. Earlier this year, after a competitive bid process, we selected Energy Systems Group (ESG), an Indiana-based energy services company to implement an array of energy saving measures throughout the city.  The ESG team has been working closely with the Mayor’s Office, Economic & Sustainable Development, Public Works, Parks and Recreation, and the City of Bloomington Utilities to complete a comprehensive strategic energy master plan and develop a solar plan on behalf of the city for the Solarize Bloomington initiative. Greg Collins ESG president, thanks for being here today.

We will be working on all these issues in the months ahead and well into 2018. But when it comes to solar itself, the City is just like a resident. We have until December 31st to be locked into those better rates. That deadline gives us a challenge: how much solar can we install in the next 5 months? That’s why I’m challenging City Hall to add 5 megawatts of power in city government over the next five months.

Together with ESG the City has developed an accelerated solar PV initiative to install solar PV at as many as 29 City buildings and locations by the end of 2017, and both ESG and the City look forward to collaborating with Duke Energy to ensure successful implementation and completion of the solar installations by the December 31st deadline put forth by SB309. The estimated approximately $15 million investment includes the costs of both PV installation and roof preparation. The funding for this project will be facilitated by a guaranteed energy savings performance contract implemented and funded by ESG, which alleviates the need for up-front city capital and dedicates payment for the new systems through realized, on-the-ground energy cost savings.

Building on our successful Solarize Bloomington initiative, this solar photovoltaic project will further reduce the City’s carbon footprint and promote clean, renewable energy use in our community. As we’re challenging our city government to do this, I’m also challenging all Bloomingtonians to do what you can do to reach 1 megawatt of production from residential users.

So…. based on the goals that our city/ESG projects will total about 5MW, and that residential production will grow 1MW this year, we'll dramatically increase the amount of solar capacity in the county.  A year ago, we were at about 1MW in the county. Our projections, with the extra efforts over the next five months, show we have the ability to hit over 8MW of capacity by the end of this year.  It took almost 10 years to build the first MW, and just over a year to build the next 7MW.  That’s fantastic and important progress. IF we do our parts.

The city’s additional 5MW, will mean over 9% of all City energy consumption and 14% of our electric production will be from solar.  Once all the efficiency projects ESG is also working on are put into place, the percentage will likely be higher.

As I said in early June when I signed on to the Mayors’ National Climate Action Agenda, Bloomington is joining efforts around the country and around the globe against climate change. We are a proactive and productive community.

We will continue to enhance efficiency in our facilities and reduce our carbon footprint with additional solar panels and an extensive energy guaranteed savings program. I encourage residents to continue doing the same through participation in programs like the Monroe County Energy Challenge, installation of residential solar panels, implementing higher efficiency City sanitation services, and other ongoing measures that will reduce the community’s environmental footprint, improve community health, and keep more money in the local economy. And JOBS, remember, this impact….

I started this speech with a warning,  that there will be consequences for inaction. We’ve seen that in the warming temperatures, the cracking ice shelf, and the violent storms and hurricanes.  What many of us will not see, is all of the things that come as a result of climate change. Political instability, food insecurity, mass migration, every fact of life will be impacted by our planet’s warming. That will be the world of our children and grandchildren if we fail to act.

It’s not impossible to imagine a Bloomington that runs entirely on clean, distributed, renewable power. And that’s what we should strive for.

Now I’d like to ask a couple of other people to share their views as well. Bruce Calloway, Manager of Government and Community Relations for Duke Energy, will comment on their efforts and interest in the projects going on in town.  And Woodie Bessler of SIREN (Solar Indiana Renewable Energy Network), will outline opportunities for local residents to bring solar home. Thank you, Bruce and Woodie.

Thank you for joining us today in support of our city, our country, and our climate.