Neighbors in eastern Iowa fight to bring down turbines — and win

FAIRBANK, Ia. — Developers who invested $11 million to install three wind turbines in eastern Iowa are tearing them down, after losing a legal battle waged by nearby residents.

It's only the second time nationally a judge has ordered wind turbines to be torn down and a first in Iowa.

"It's great. We love it," said Cheyney Hershey, whose young family lives near the turbines. "You can't sit outside on the deck and have a conversation without the constant thumping of the blades going round."

The noise can even be heard inside his home, Hershey said: "There was nowhere to get away from them."

His family and others watch daily to see what work has been done: Crews have torn down two turbines and are dismantling the third. They have until Dec. 9 to complete the work.

Opponents to the 450-foot turbines believe the legal battle will empower other rural landowners and small towns to take on wind.

Residents in Palo Alto, Black Hawk and other counties are challenging wind projects as well.

"It was a shock that the neighbors and Fairbank could say we didn't want them" and win, said Ted Vorwald, a Fairbank city council member.

In 2015, the Fayette County Zoning Board provided permits that allowed the wind developers to build the turbines.

Nearby landowners challenged the permits in district court, where a judge agreed with them, saying the permits were "illegal and void."

Developers appealed the decision, and decided to move ahead with construction.

But the Iowa Court of Appeals this year ruled in the city and residents' favor. And the Iowa Supreme Court declined to consider the case, forcing the developers to tear down the turbines.

"The system worked," Vorwald said. "They were put up without the zoning ... and the courts upheld the ruling."

"This isn't something that's happened before, where you have a development that played by the rules, got the permit, and to have that result in a forfeiture — the actual tearing down of the turbines," Dublinske said.

That "will make some people leery about whether the rules can change after the investment is made," he said. 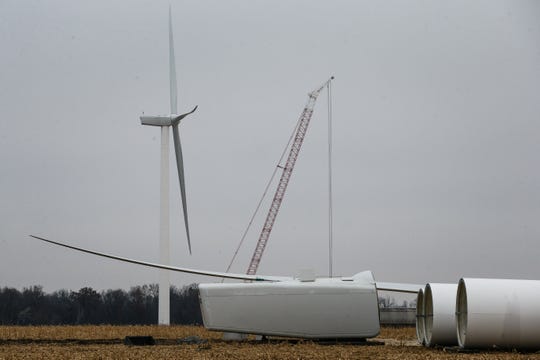 Buy PhotoOne of three wind turbines sits deconstructed in a field outside of Fairbank on Friday, Nov. 16, 2018. A district court judge ordered three wind turbines to be dismantled after deciding that Fayette county provided the developers permits illegally in 2014 who now have until December 9th to bring them all down. (Photo: Brian Powers/The Register)

'It has been a long and costly four years'

It sits about 35 miles from Waterloo and 50 miles from Cedar Rapids, offering an alternative for families wanting to live outside of the big eastern Iowa cities, she said.

"A lot of younger couples have moved here," says Kerns, one of the landowners near the wind turbines. "It's a nice community with a lot of professionals."

The wind turbines, about a half mile from the city's northeast side, lie in the way of Fairbank's growth, say Vorwald and others.

The turbines sit near 36 lots the city approved for residential development. "That's a lot of homes for a small town," Vorwald said.

Landowners John W. Woods and Ron Woods, owner of Woods Construction, are longtime residents who are developing the addition and challenged the wind energy project. Ron Woods is a Fairbank council member.

The Woods family said in an email the turbines would have halted their development efforts. "It has been a long and costly four years of going to hearings and disputing the wind companies. We believe Fairbank will now continue to grow and attract new" residents, they said.

Kerns said she grew up on a farm near where the turbines are now located.

She said the wind developers have been "bullies," moving ahead with building the turbines knowing local landowners had filed a lawsuit against the project.

"They just weren't considerate of the townspeople," said Kerns, who is concerned about the impact of the turbines on the health of neighbors.

She said some residents have complained about nausea and sleep deprivation from the turbines. Flickers from the turbines create an effect "like being back in the '70s with the strobe lights," she said.

"In the short-term it's not bad. But over time, it's not good for your body," she said.

"Unless you live under a turbine, you don't understand what it's like," said Kerns, who built a home near her family's farm.

She said the turbines encroach on a nearby woods, where she played as a child. Since the turbines have stopped turning, "I can hear the birds chirping again," Kerns said.

'It's all about the money'

Dublinske is unsure whether the dismantled turbines will find a new home.

Alliant Energy had purchased the wind energy generated near Fairbank.

"Those turbines will go into storage and ... hopefully, they'll be used somewhere else," Dublinske said.

"That's one of our big concerns. Having obtained the proper authorization ... to have this end up in millions of dollars of waste is unfortunate and unfair," he said.

MORE: Is wind power saving rural Iowa or wrecking it?

Iowa has embraced wind energy since adopting a renewable energy portfolio in 1983.

MidAmerican Energy, Iowa's largest utility, is betting heavily on wind. With its proposed $922 million wind expansion, it will have invested $12.3 billion in wind energy since 2004.

MidAmerican, owned by Warren Buffett's Berkshire Hathaway, expects to generate as much renewable energy as its customers use annually.

"The courts are the only place we have to defend ourselves," said Janna Swanson, a wind opponent who lives in northwest Iowa, where some neighbors are challenging whether the wind farms need state utility board permits to operate.

The Iowa Utilities Board says no, but the ruling is being appealed.

County officials and landowners who lease land to wind developers like the money the turbines bring, said Harold Youngblut, a Black Hawk County farmer who is fighting a $120 million wind project in court.

"It's all about the money," instead of about local residents' concerns, said Youngblut, whose attorney is challenging whether high-dollar farmland can be used to build large wind farms.

The Black Hawk County wind developer planned, but later killed, a turbine project across the street from Youngblut's family farm, where his son and family now live.

Still, Youngblut is sticking with the lawsuit.

"We need to stand up for what we believe is right," Youngblut said. "I don’t like being in a lawsuit. But I believe there are too many unanswered question about these turbines."

Dublinske said the legal challenges so far have been limited.

"There are always some not-in-my-backyard objections, especially for people who are not hosting the turbines and getting the revenue," Dublinske said.

Utilities say farmers are compensated for any short-term damage, and they use deep-tillage machines to help reverse compaction.

"A lot of places say we're against renewable energy," Swanson said. "That has nothing to do with it.

"What we care about is our homes, our health, our land, our wildlife and our economy," which are jeopardized by wind projects, said Swanson, a board member of the Coalition for Rural Property Rights, along with Youngblut.

She questions whether wind energy is really a good public taxpayer investment, given that MidAmerican will get about $10 billion in federal production tax credits for its $12 billion investment.

"It's hard for us in the country to fight this, and the utilities know that," she said, adding that rural Iowans deserve more voice in wind turbine developments.

In Fayette County, residents say a new county ordinance guiding wind development gives them a little more confidence that they'll be protected in the future.

But they say they need to be vigilant. The Woods family, which brought down the turbines, said they hope the lawsuit makes developers think carefully about where they plan to build them.