Nestlé’s interstate on I-69 sign going solar; Bunny to be powered by the sun 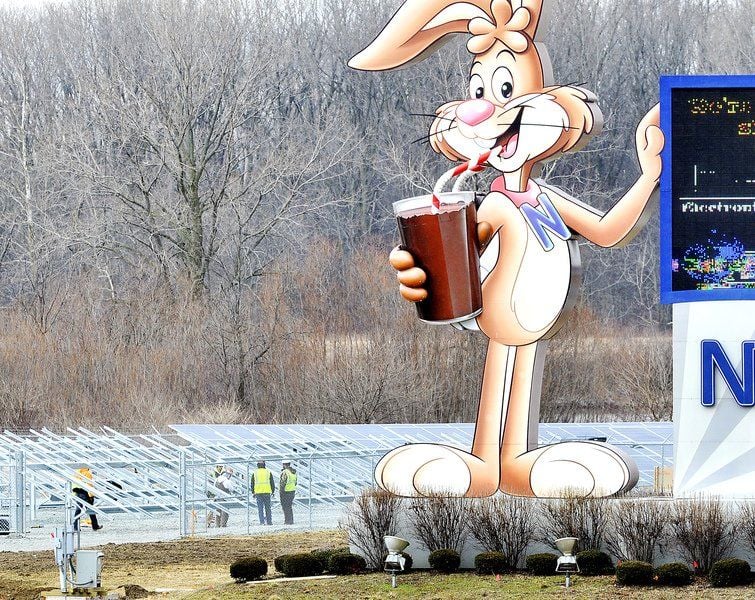 Bunny to be powered by the sun

Editor's Note: This is not a new story but I was reminded that I had not reported on this solar project yet when driving on I-69 recently.

ANDERSON – The Nestlé Bunny sign along Interstate 69 in the near future will be powered by solar panels.

Jeff Buck, the engineering manager at Nestlé's Anderson plant, said the electricity generated by the solar panels will power the “Bunny” sign and be used for additional lighting of the manufacturing and distribution operation at the intersection of 73rd Street and Layton Road.

“This is part of a worldwide initiative by Nestlé to use green energy,” Buck said. “This is one of the systems we’re using.”

Nestlé first started exploring alternative energy to power the sign in the second quarter of 2015. The company considered wind turbines but decided on solar power because of lower maintenance costs and greater reliability.

The solar panels are expected to be in operation for the sign and lighting of the plant by April, according to Buck.

Nestlé officials have no plans to expand the set of solar panels now under construction in Anderson. The work is being done by Fredericks Construction and Gaylord Electric.

Edie Burge of Nestlé corporate communications wouldn't say how much the solar panel project costs or how much it will save the company in electrical costs, citing company policy.

“This is a shared value with the community,” Buck said. “By using solar energy, it makes more electrical energy available to other customers.”

Opened in 2009, the Nestlé Anderson plant produces Coffee-Mate non-dairy creamer and is the sole production site for Nesquik ready-to-drink in the U.S. It also serves as a storage and distribution center for other refrigerated Nestlé products.

Nestlé expanded the Anderson plant in 2014 following a $72 million investment to add a seventh production line to increase the production capacity for Boost and Carnation Breakfast Essentials.