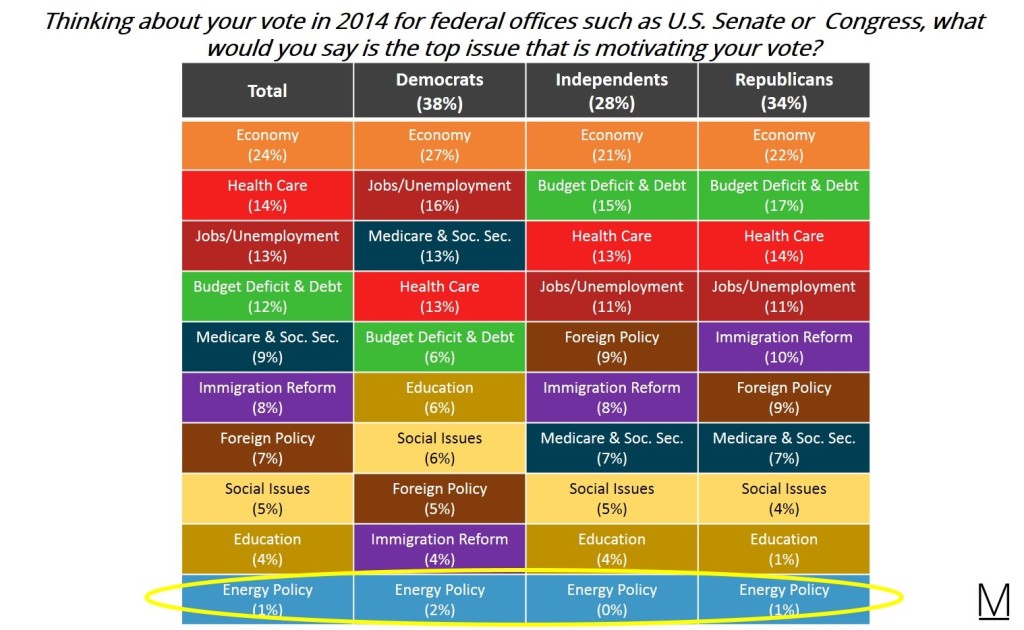 This poll was conducted from September 12-13 with 2,083 likely 2014 voters. The interviews were conducted online and the data were weighted to approximate a target sample of likely voters based on age, race/ethnicity, gender, educational attainment, region, annual household income, home ownership status and marital status. Results from the full survey have a margin of error of plus or minus 3 percentage points.

Morning Consult’s energy poll finds that just 1% of voters rank energy policy as their top issue, suggesting a steep hill for those on either side of the aisle trying to make the election about energy issues.

37% of all voters say their top issue is jobs/economy, while health care and the budget deficit are the next issues of importance— Just 1% of voters rank energy policy as their top issue, suggesting framing the issue as “energy policy” is a loser for Republicans/Democrats waging a fight over it. It is likely the importance of the issue increases when tied to voters’ pocketbooks (e.g., cost of gas, cost of utilities).

Ohio’s energy industry is facing many important issues: The environmental impact of oil and gas drilling, the future of renewable energy and the changing face of electric utilities.

But politicians who are looking to focus on the topic should take note: Most voters place energy as a low priority.

A new poll finds that just one percent of voters say energy is their top issue. Two percent of Democrats, one percent of Republicans and zero independent voters give energy policy top billing, according to the poll from

The Morning Consult, a well-read digital media company that covers “the intersection of Washington and the private industry.”

The top issues are directly tied to money: Economy, health care and unemployment are easily felt by voters. Energy policy, on the other hand, is a bit more unwieldy.

I think it would be a much different result if it read "cost of energy" rather than "energy policy."