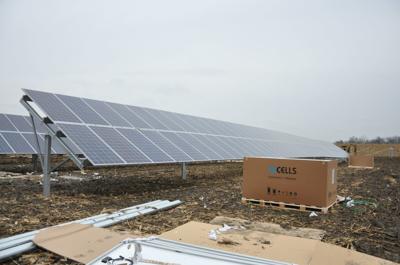 Solar panels have been installed at a new array at the corner of S.R. 3 and C.R. 70 just south of LaOtto in DeKalb County. The field is being built by Wabash Valley Power, but will connect into lines owned by Noble REMC and the power can be distributed to its customers.

LAOTTO — When the sun is shining, the electricity will be flowing.

In a diversifying energy market, Noble REMC and its customers will be one beneficiary of a new solar field currently being constructed just south of LaOtto.

If you’ve driven along S.R. 3 recently, you may have noticed crews putting up dozens of metal frames at the southeast corner with C.R. 70 in DeKalb County. This week, installers have been starting to add the recognizable mirror-like panels to those frames, all tilted slightly upward toward the southern sky.

The 1-megawatt solar array is being built by Wabash Valley Power, a nonprofit whole power producer which provides energy to numerous utilities in the region through its co-op solar program. Wabash Valley Power provides electricity to Noble REMC, which serves customers in Noble and DeKalb counties and other surrounding areas.

Construction started earlier this month and is advancing quickly, with the new solar array expected to be connected and generating power by spring, said Noble REMC communications specialist Kelly Lynch.

Noble REMC surveys its customers and interest in renewable energy sources has been rising. Cost for individuals to generate renewable energy themselves can be high between installation of equipment and ongoing maintenance, so having a major power generator invest in the infrastructure and add that renewable energy to its portfolio is one way to bring green energy to households.

“We’re listening to our members and how they want to see energy change,” Lynch said. “This gives them an option to go green without having to make that huge investment.”

“Arrays in multiple locations give members the best opportunity for capturing the most sun due to weather diversity, and allows the arrays to produce the most electricity collectively,” said Andrew Horstman, project manager for Wabash Valley. “It may be raining on the arrays in Indiana, but the sun may be shining in Missouri or Illinois.”

The power from the solar array will hook into Noble REMC lines, but through Wabash Valley, it can be distributed to REMCs in Noble, DeKalb, LaGrange and Steuben counties as well as 20 other Midwest co-ops.

Having the array located just off the highway allows Noble REMC to show people where their electric comes from as it continues to grow and diversify its energy sources.

“It’s cool to just be able to visualize solar energy,” Lynch said. “We have this program, but now we can show people exactly where they’re getting it from.”

The array was engineered by Solential Energy and is being put in by Indianapolis-based Bee Solar.

Mike Robinson of Bee Solar said the array consists of 3,648 individual solar panels installed on the racks. Those will generate about 1.2 megawatts of direct current energy, but when that’s transformed to alternating current — the type of electricity that is used for transmission — it totals 1 megawatt.

That power will go into the grid to be used where its needed, but if it were hooked up directly, a 1-megawatt field could power about 75-125 households depending on usage, Robinson said.

He said the 8-acre plot is a good size for a utility that’s taking early steps into renewable power generation.

“This is a fair-sized field for Indiana,” Robinson said. “This one here is a good entry level for the REMC to get a feel for what’s going on.”

Solar panels function by catching sunlight in the individual panels, which excites membranes in the glassy structures. Electrons get excited during the process and then are captured as current and then transformed into usable power for delivery, Kevin Burns of Solential explained.

The panels are angled up at about 30 degrees and facing south, which maximizes the amount of sunlight they will capture throughout the day based on the latitude of the field on the Earth, Burns said. Some solar arrays have the ability to rotate to follow the sun, but the LaOtto field was designed as a stationary set.

And yes, Burns said, solar panels still work even when the sun isn’t blaring. On Thursday, with an overcast sky and on-and-off drizzle, the solar panels would still generate electricity, just not as much.

“We’re probably going to get 50 percent of our power with how cloudy it is right now. You can still get a very good subset of power output on a cloudy day,” Burns said.

One other interesting aspect of the project is that once construction is complete, wildflowers will be planted at the site to not only beautify the 8-acre plot but also give a place where pollinating insects likes bees can thrive.

Planting wildflowers reducing the amount of maintenance needed for mowing. By not having to run gas-powered mowers, that’s another way the solar field helps reduce carbon output while providing an environmental benefit to the area.

“We are reducing our dependence on fossil fuels at the same time as creating a habitat for pollinators,” Robinson said.