There’s no denying it: Conservatives across the spectrum want cleaner energy. And they want politicians to support it too.

As the press tries to understand Donald Trump's approach to energy and climate change policy, the focus is on his limited policy proposals, transition team appointments, and confusing, offhand quotes. But it's also helpful to look to the voters themselves.

Trump won the presidency partly because of his ability to speak directly to the angst of many voters. That was how he approached energy too. In numerous speeches during the campaign, Trump painted a dire picture for America's energy landscape -- a place where workers are losing jobs in droves and regulation is killing domestic production.

In reality, however, there are now more American solar jobs than jobs in oil and gas extraction, and the country is the world's leader in oil and natural-gas production. We're truly an "all-of-the-above" country -- and increasingly, more energy is being sourced from above the ground, rather than below it.

And if Trump listens to his own voters, he'll hear this genuinely positive story about the future of energy. Because his supporters really like renewables -- and they really want the government to prioritize them.

A new survey of 1,000 people conducted by the Republican polling firm Public Opinion Strategies illustrates this dynamic. According to the poll, 75 percent of Trump voters support "action to accelerate the deployment and use of clean energy" -- including solar, wind, energy efficiency, and community renewable projects.

This backs up what we already know. Renewables are generally not a partisan issue. Survey after survey demonstrates this fact.

Although many Americans believe their country has fundamentally changed after the election, the story on clean energy remains the same. People of all political persuasions want more of it.

Let's take a look at what voters are saying.

First to the broader electorate. Across the board -- from the most hardcore conservatives to the staunchest liberals -- Americans support "taking action" to support clean energy. (More on the "action" piece below.) 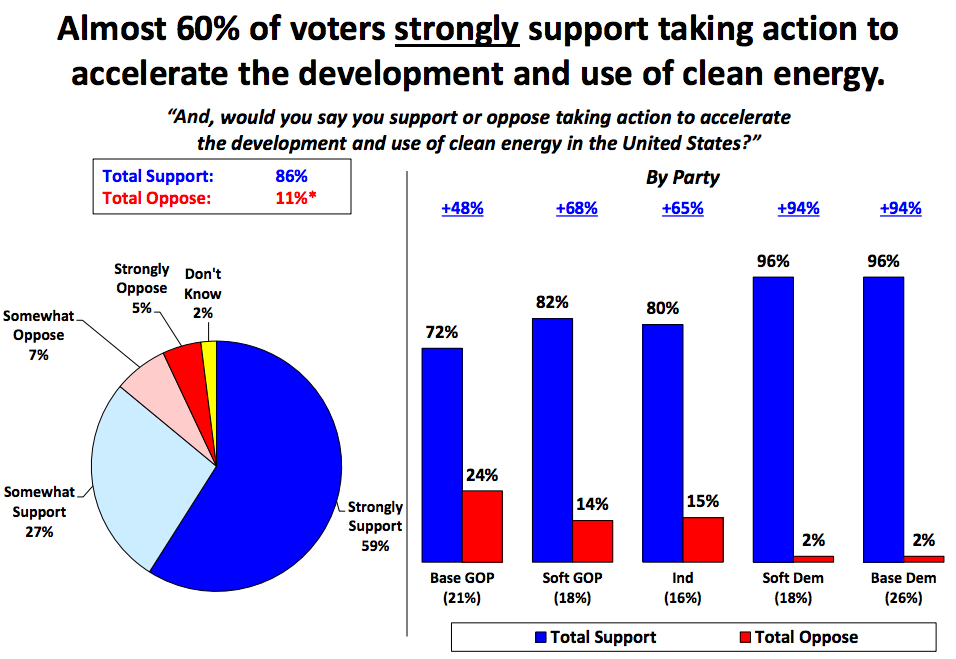 Voters also overwhelmingly support an "all-of-the-above" strategy, even across party lines. However, as strategist Glen Bolger points out, voters are generally less enthusiastic about coal. "There is majority support for less emphasis on coal," he writes in the report on the survey results.

So how does this shake out when only Trump voters are factored in? The trend only gets stronger. 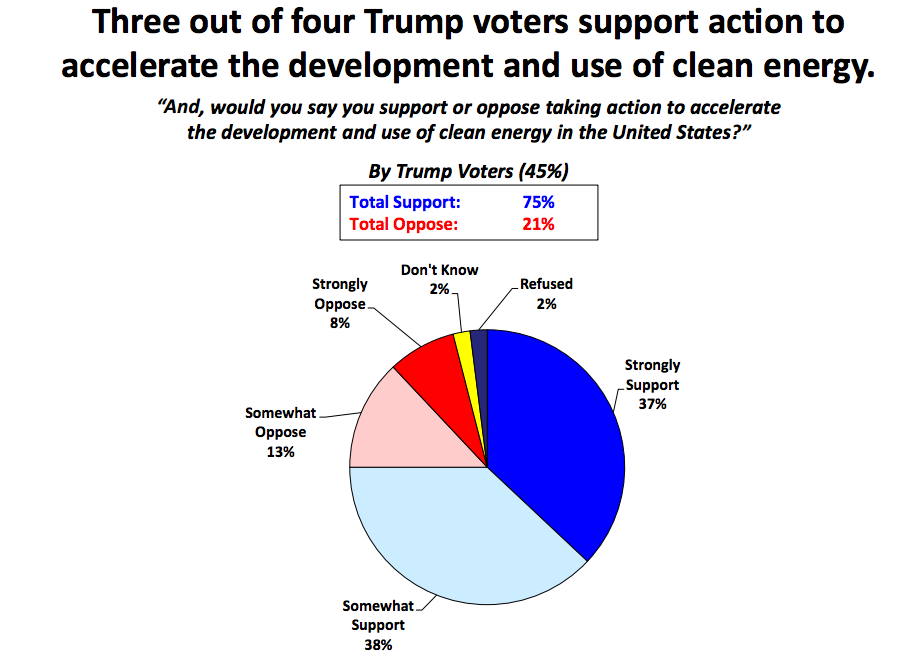 Broken down by technology, natural gas, wind, solar and hydropower all get majority support from Trump voters. Solar leads with 61 percent support -- a finding that won't come as a shock to anyone following the rise of the Green Tea Coalition.

"A majority of Trump voters want to see more emphasis on domestic energy in natural gas, wind, solar and hydropower. They are modestly supportive of coal, and mixed on nuclear. They also strongly support their state pursuing an all-of-the-above energy strategy that includes an increase in electricity generation from emerging technologies like renewable energy, as well as more energy efficiency," writes Bolger.

Broadening out to all Republican voters, the survey also finds a similar pattern.

"When Republicans hear the phrase 'clean energy,' they think of solar and wind power. They say it is non-polluting and leads to clean air and renewable energy. There is some concern about the cost and government regulations, but that is outweighed by the positives," writes Bolger.

There is still opposition to state-level mandates among the most conservative Republicans. However, a majority of moderate conservatives do back renewable energy standards. (Unsurprisingly, 90 percent of liberals support the policy.) In total, two-thirds of voters support state targets for renewable energy.

"There is also strong support, except from base Republicans, for states to have a renewable portfolio standard requiring a minimum amount of electricity generated by a utility to come from renewable sources," concludes Bolger. 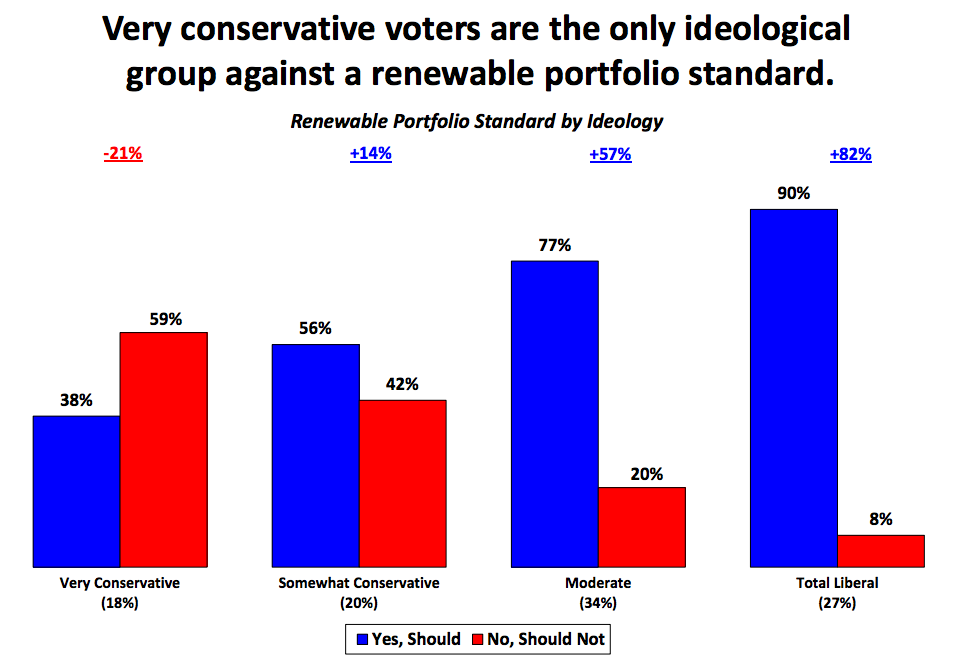 Public Opinion Strategies also asked voters if they'd be willing to pay a small premium for clean energy: “If accelerating the growth of clean energy meant that, in the short term, consumers would have to pay a little bit more for energy but in the long term would have more stable, cleaner, and cheaper energy, which would you choose?”

The responses break down along similar political lines. A majority of moderate conservatives and independents say "yes," while the most conservative Republicans say "no." 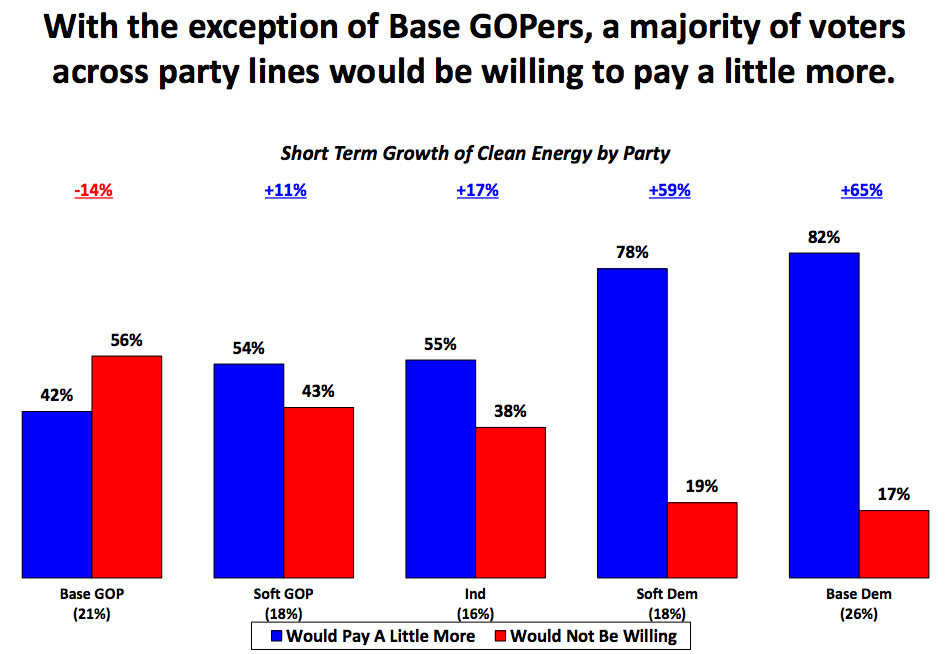 According to the results, 60 percent of voters agree with the following affirmative statement: "Some people say net metering is fair because it encourages the development of solar resources, and other customers benefit from the extra solar energy that goes onto the electricity grid."

However, no matter where voters sit on the political spectrum, a plurality or majority think that net metering is fair. 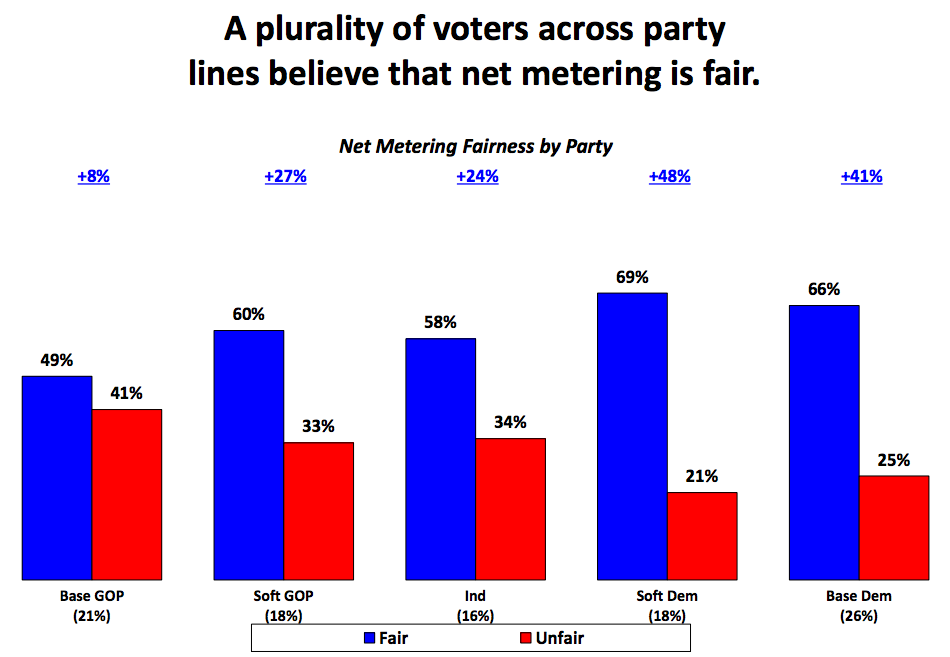 Finally, voters really do care about how candidates talk about energy. They want more clean energy -- and they want politicians to want more of it too.

"Voters overwhelmingly say it is important that a candidate for political office shares their opinion on energy issues," writes Bolger. 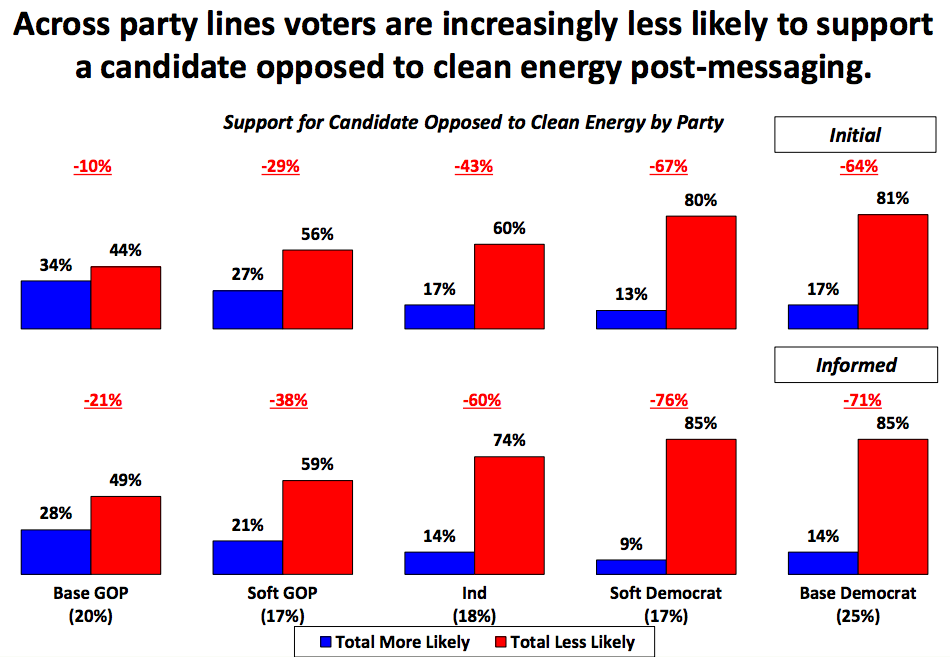 And messaging matters. The most important message for conservatives revolves around wealth creation.

This statement polls the best among "base" and "soft" conservatives: "We should accelerate the growth of clean energy to allow American innovation and entrepreneurs to drive economic growth and job creation."

In Trump's America, voter support for clean energy is alive and well. No election can change that.