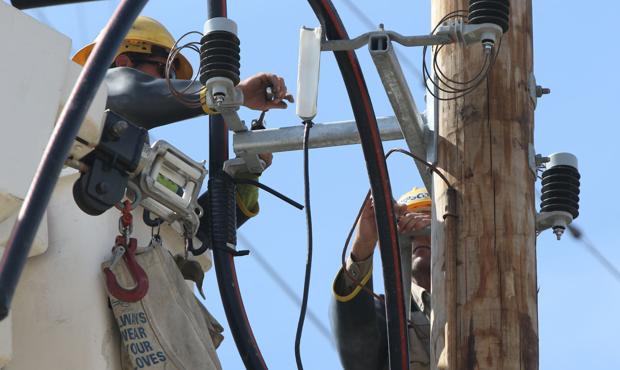 A NIPSCO lineman works on installing high-voltage power lines near a new substation just off Bingo Lake, in St. John. It is part of an extensive electric modernization project underway for two years at the utility, which will increase reliability for customers.

NIPSCO has filed a rate-hike request with state regulators that proposes increasing a typical residential customer's electric bill by 11.5 percent.

The increase would pay for increased costs and a variety of improvements made by the utility since its last rate hike in 2012, including $95 million in distribution upgrades and a $90 million meter replacement program, according to NIPSCO chief executive Violet Sistovaris.

"Our proposal works to strike the right balance of cost and service, so that we can provide the level of service customers expect," Sistovaris said on Thursday.

For residential customers, much of the increase would come from increasing the fixed $11 customer charge that appears on every customer's bill to $20, according to testimony filed in the case.

The Citizen's Action Coalition immediately decried that aspect of the increase, saying it means those who use less energy will actually see a bigger percentage increase in their bills.

“When you increase fixed costs like that, you are actually increasing charges more for low-volume users, who are usually the elderly or the poor,” said Kerwin Olson, Citizens Action Coalition executive director. “So that is incredibly inequitable to vulnerable populations.”

NIPSCO spokesman Nick Meyer said the increase in the fixed customer charge will cover utility costs that stay the same year after year with little fluctuation. He said customers with low energy use are not necessarily low-income, so the effect will not be inequitable.

NIPSCO's request was filed Thursday afternoon with the Indiana Utility Regulatory Commission, which will now schedule proceedings in the case. NIPSCO expects a ruling by August 2016.

The Indiana Utility Regulatory Commission proceedings will include a public field hearing in Northwest Indiana as well as testimony by NIPSCO and consumer groups in front of the commission in Indianapolis. The commission can ultimately grant NIPSCO's request, amend the request, or reject it.

NIPSCO has 460,000 electric customers spread across 32 counties in northern Indiana. It also has 810,000 natural gas customers. Natural gas bills would not be affected by NIPSCO's request.

Sistovaris on Thursday confirmed the utility also plans to file a request by the end of this year for a bill surcharge to pay for a seven-year modernization program for its electric distribution system. If the commission grants the utility's request, customers would also see that charge added to their bills within a year.

Under NIPSCO's Thursday request, a typical residential customer using 700 kilowatts of electricity per month would see their bill increase to $102.16 from the current $91.63, making for a $10.53 increase. NIPSCO has established a Web page where customers can calculate the impact on their individual bill at NIPSCO.com/rates.

NIPSCO residential bills have increased 29 percent during the last decade, according to the most recent bill survey by the Indiana Utility Regulatory Commission. That is the the smallest increase among the state's five large, investor-owned utilities. But NIPSCO charges remain the second highest among those five.

The last increase in NIPSCO base rates approved by the commission at the end of 2011 hiked a typical residential customer's bill by 4.5 percent. That was followed by a subsequent 3 percent increase due to the costs of an energy conservation program.

In addition to the distribution and meter replacement programs, NIPSCO also wants to recoup its operating costs for federally mandated pollution control equipment installed at generating stations since the last rate case.

Here are the bill changes a typical NIPSCO residential customer has experienced in the last five years. The 2012 increase was due mainly to an increase in basic rates, but the others were due to increases in surcharges called "trackers" that pay for special projects and other costs. NIPSCO has had the smallest bill increases of any of Indiana's five, large investor-owned utilities during the past 10 years, according to the Indiana Utility Regulatory Commission's annual bill survey.

IndianaDG Editor's Note: This is likely not to be the only rate increase request NIPSCO makes this year. NIPSCO also intend to file another TDSIC case in December of 2015.