NIPSCO wants to entice large customers to stay; will smaller ones pay the price? 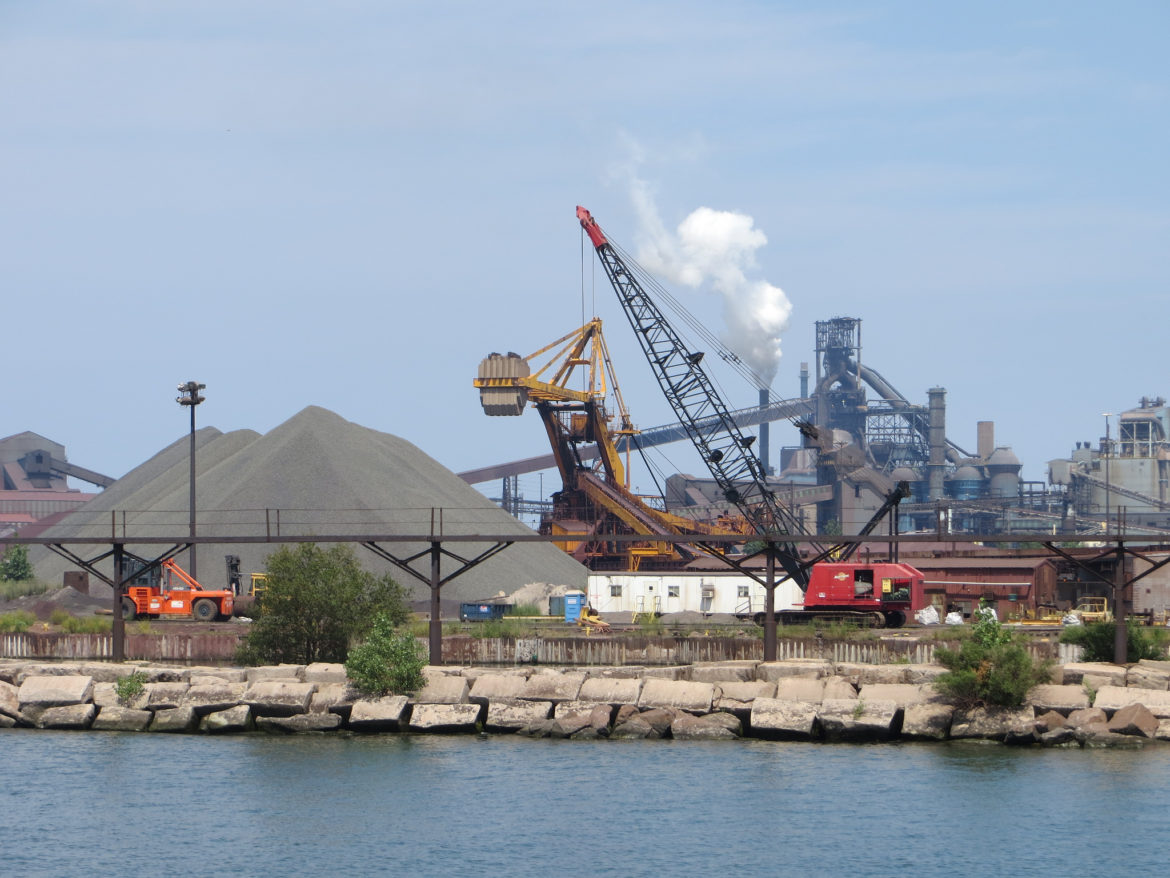 The ArcelorMittal Steel Mill in Indiana Harbor is one of the five large industrial NIPSCO customers that would be affected by a cost shift proposed by the Indiana utility.

Indiana utility wants to entice large customers to stay; will smaller ones pay the price?

Clean energy advocates have largely applauded the utility’s decision, which will mean cleaner air and ratepayer savings of about $4 billion, according to the company. A related move by the company is drawing criticism, though.

NIPSCO is proposing to greatly decrease the amount paid by its five largest customers — including steel mills and an oil refinery — in a bid to dissuade them from developing their own generation and curbing their reliance on NIPSCO.

In a rate case currently before the state’s Public Utility Commission, NIPSCO proposes to significantly reduce the amount these large industrial customers pay for fixed costs including upkeep of the grid and depreciation costs associated with the coal plants’ closing. That means more of the burden will fall on regular customers and smaller businesses.

In expert testimony filed for the Citizens Action Coalition, consultant Jonathan Wallach said the large industrials would see their fixed costs drop by about 60 percent thanks to the new structure. In all, $67 million to $80 million worth of the utility’s cost recovery would be shifted from large industrial to smaller customers, estimated Wallach, vice president of Massachusetts-based Resource Insight, Inc. NIPSCO itself estimated that $40 million worth of costs would be shifted.

Coalition Executive Director Kerwin Olson said he finds the request to reduce large customers’ fixed costs ironic, since NIPSCO like otherutilities has argued that customers reducing their energy demand through distributed solar are not paying their fair share to keep up the grid. As Olson sees it, the cost shift would mean the large industrial customers would not be doing their part for grid upkeep.

“We want to do what we can to support NIPSCO’s clean energy transition,” Olson said. “We didn’t say no cost shift; we basically said it’s not fair the industrials aren’t paying their fair share, and it’s not fair every other rate class gets an increase and industrials get a decrease. We’re trying to find a middle ground.”

“If the other large industrial customers were to follow suit and generate their own energy, it would mean that nearly all of their costs would need to be spread among all other remaining customers — including both commercial and residential,” said NIPSCO spokesperson Nick Meyer.

“Instead of this potential future scenario, NIPSCO has proposed a rate structure that maintains industrial competitiveness, keeping these employers and their jobs in northwest Indiana, and keeping a portion of their usage tied to NIPSCO’s system as a way to help reduce the cost burden on all other customers.”

Meyer said the five large industrial customers that would be affected by the proposed cost shift are BP along with steel operations US Steel Gary Works, ArcelorMittal and NLMK, and industrial gases company Praxair.

“NIPSCO’s five largest industrial customers have historically accounted for approximately 40 percent of NIPSCO’s energy sales and have covered a significant portion of the overall fixed costs associated with producing and delivering electricity to nearly half a million customers,” Meyer said. “They face global competition and it’s imperative that they’re not paying for more of the system costs than what is tied to serving them.”

Olson said the utility is offering the industrial customers a deal that is unfairly sweet.

“What they’re effectively doing is giving those industrial customers a deregulated marketplace,” he said.

“This is classic deregulation stuff — industrials leave the grid to procure their own energy yet don’t have to contribute to the ongoing costs of assets — power plants — that were put into place to serve them. They shouldn’t just be able to say, ‘We’re not paying for that anymore, we’re doing our own thing.’ It’s like having a mortgage on a house — you move out of your house and the mortgage isn’t paid, you still have to pay that mortgage.”

Under NIPSCO’s proposal, residents would also face a monthly fixed cost increase from about $14 to $17. Citizens Action Coalition is proposing the cost be lowered to $12.55 per month.

“If usage-driven costs are inappropriately collected through fixed customer charges, then customers will have reduced incentives to control their bills through conservation or investments in energy efficiency or distributed renewable generation,” Wallach testified.

Meyer indicated that the increase might entail switching payments from another part of the bill into the fixed cost charge, giving customers “a clearer picture of how energy use affects their bill.”

“Additionally, increasing the customer charge further stabilizes customer bills throughout the year, especially during the summer, when electric bills are typically higher because of warmer temperatures and increased usage,” she said.

The coalition also filed expert testimony from John Howat, a senior policy analyst at the National Consumer Law Center, calling for more programs to help low-income customers. He wrote that the federal Low Income Home Energy Assistance Program is not adequate as evidenced by the fact that between 2013 and 2018, up to a third of residents with the aid had their electricity disconnected.

Howat estimated that given the cost of living, one would need to earn almost double the poverty-level wage to live in NIPSCO service territory. More than a quarter of families are not earning that much, he testified, and “low-income households must devote a higher proportion of total household income to basic home electricity service than their higher-income counterparts.”

“We’re not talking about video games, we’re talking about electricity to heat and cool your home and take a hot shower,” Olson said. “Just simply put, access to electricity in one’s home is a necessary and essential human service, in order for folks to participate in society in a meaningful way.”

IndianaDG Note: The IURC held a public field hearing on the NIPSCO proposed rate increase on 3/11/19.

The Office of the Utility Consumer Counselor (OUCC ) invites written consumer comments through the close of business on Wednesday, March 13, 2019.

HAMMOND — About 200 people — including seniors, elected officials and families living paycheck to paycheck — poured into the Hammond High School’s auditorium Monday night to sound off against NIPSCO’s proposed rate hikes.

The meeting was held so that the Indiana Utility Regulatory Commission, which must approve any rate increase, could hear testimony from the public as part of its legal proceedings over NIPSCO’s rate case.

Under the utility's plan, the average monthly bill for small businesses and residential customers would increase by nearly 12 percent, whereas industrial customers’ bills would be reduced by nearly 19 percent.

The overall bill adjustment includes an increase to the existing, fixed $14 monthly customer charge by $3 per month, according to NIPSCO, which services about 820,000 natural gas and 460,000 electric customers.

People like Queen Alexander, a Lake County deputy clerk, said the hike means she and her husband’s $240 monthly utility bill at their Hammond home will increase by about $30 a month, or $360 per year, on top of NIPSCO’s proposed $3 monthly fixed charge increase.

“It’ll be like living paycheck to paycheck,” she said. Her husband, retired from the steel mills, now brings home a fixed income.

Buddie Fernie, of Hammond, said he retired in May from the city of Hammond’s planning department. Now 77, he and his wife live on a combined fixed income of about $52,000, he said.

“We can’t afford this. We recently had to remortage our home,” he told The Times.

Many argued it’s unfair that NIPSCO’s five biggest industrial customers — BP, U.S. Steel, Arcelor Mittal, Praxair and NLMK Steel – are all getting a break while the utility shifts the burden to individual consumers.

Wearing a navy blue T-shirt that read “Empower Indiana” and “People Over Polluters,” Lou Donkle, of Valparaiso, said the hike “reeks of yet another blast of trickle-down economics.”

“Give to the corporations and the rich, and take from the poor, the working class,” Donkle said.

People like Nancy Moldenhauer, of Michigan City, argued higher energy costs force low-income families to decide between paying their electricity bill and paying for other critical items such as health care, food and childcare.

“They have to make the choice of paying for food and medicine over having to keep warm in the wintertime and cool in the summer,” she said.

The changes would generate an additional $21.4 million in revenue, according to NIPSCO’s filings with the IURC. The average customer would see their bill increase by $11 per month, or about $132 per year.

NIPSCO has said the rate hikes are part of a larger plan to accelerate the retirement of older, less efficient coal-fired equipment and services and shift to natural gas and renewable sources.

Newly proposed electric rates would be phased in over two steps in September 2019 and March 2020, according to the company.

In recent days and weeks, several municipal boards, including Michigan City, Hammond and Gary, have passed resolutions opposing the hikes.

Municipalities would also be hit hard by the increase, officials argued.

Michigan City Council President Don Przybylinski said the city’s annual bill from NIPSCO is about $1 million. The company’s proposed increase would raise that by about $175,000, he said. He said small business owners with whom he has spoken to believes their bills will increase by about $5,000.

“That’s money that could be used to increase employee wages or benefits,” he said.

“I plead of you, I beg of you, and I implore you not to give this increase to NIPSCO,” she told the IURC.

Wyatt said the cash-strapped city’s NIPSCO bill is about $370,000 a month. City government and its residents will suffer, while NIPSCO’s biggest industry customers benefit, she said.

“While businesses can pass on any increase, there’s no one, no one, for whom the family household can pass this onto,” she said.

NIPSCO has repeatedly pointed out their rates fall below the national average. However, the Indiana Office of Utility Consumer Counselor — the state's advocate for utility customers — said the utility’s electric rates ranked second-highest among utilities regulated by the IURC as of July 1, 2018.

The state’s OUCC is recommending against the hike.

This isn’t the first time NIPSCO’s proposed hikes has drawn the ire of residents, activists and business owners. More than 300 people turned out to IUN to an IURC hearing in March 2009, where the utility company was requesting a similar hike. That request was ultimately shot down in part due to public pressure.

NIPSCO spokesman Nick Meyers said hearing from consumers is an important part of the regulatory process.

“The goal of this nearly yearlong review is to strike a balance on new rates that are fair to both customers and the company,” he said.

Groups like the Sierra Club, the Indiana NAACP and Citizens Action Coalition have come out in opposition of the hike.