Now Even Apartment Dwellers Can Use Solar Power 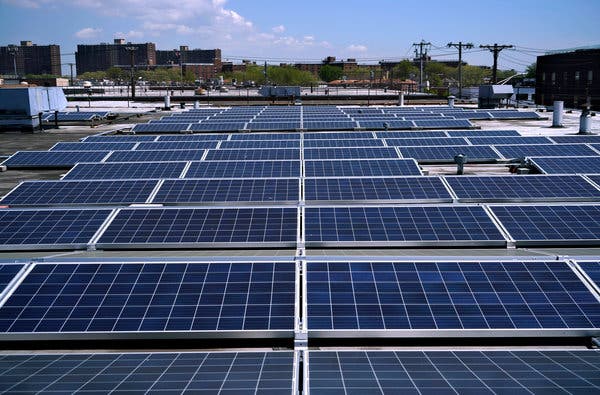 A solar array system on the rooftop of Truck & Trailer Service Ltd., in East New York, Brooklyn, creates solar energy for a community solar group that has members from across the city. CreditChang W. Lee/The New York Times

Now Even Apartment Dwellers Can Use Solar Power

More New York homeowners have tapped into solar power in recent years, as regulations have eased and prices have dropped. But apartment dwellers, for the most part, have been kept in the dark.

Starting this summer, though, renters and homeowners who live in buildings that don’t, or can’t, have solar panels on the roof can join something known as a community solar group. Simply put, these groups allow someone in a Manhattan apartment to lower their electricity bill by connecting to solar panels that happen to sit on the rooftop of, say, a Bronx warehouse.

“I think community solar gives equal access to solar power for those of us in the city,” said Taka Juba, an owner of a Manhattan condominium apartment, who joined the city’s first community solar group run by IPPsolar, a Manhattan-based solar firm. “Anything to offset your bill is great, but there’s a social and environmental impact too.”

These community groups essentially broker the sale of solar power to a local electrical company, which in turn gives the group’s members a discount on their electricity bills. Each member’s discount varies depending on the size of the group’s solar array system — that is, a combination of several solar panels — and the number of members in the group.

Most groups have a four-prong system that connects a host, sponsor, utility and customers. A host or a commercial building owner either buys its own solar array system or leases its rooftop space to a sponsor that will design, operate and maintain a system. The sponsor then sells the solar energy produced as solar credits to a utility, which in New York City’s case is Consolidated Edison.

Anyone in the city who pays an electricity bill though ConEd can sign up with a community solar group and earn a discount. Customers pay their bills through a subscription manager, or a third-party billing vendor, which provides a breakdown of charges. In Mr. Juba’s case, he gets a bill from Arcadia Power, a Washington D.C.-based energy technology company that offers a personalized online dashboard showing how much energy was derived from the renewable resource.

Several community solar groups are up and running in the city, including one operated by local solar developer Daroga Power, and a few more are expected by next year. Many in the first wave of groups do not charge membership fees, and they are guaranteeing a 10 to 15 percent reduction to a customer’s monthly electricity bill. The amount of power produced by a solar array system, the number of subscribers, and each household’s electricity usage will determine the individual discount, said Maziar Dalaeli, a partner at IPPsolar.

The terms, rates, and offerings differ from group to group. Some require a customer to agree to a rate-lock, or a fixed rate for electrical consumption over several years. Others may charge a yearly membership fee. Customers who opt into community solar groups are never disconnected from ConEd, and will continue to pay connectivity and other charges through a bill from the subscription manager.

Mr. Dalaeli said IPPsolar’s first group has month-to-month contracts, and the account can be transferred to a different address if the customer moves within the five boroughs. The number of subscribers in a group will be capped at 25 households so the firm can ensure a discount to everyone.

“As the concept of community solar gets accepted further, we’ll be able to build larger systems and that will help expand the number of people that can be part of a group,” he said.

IPPsolar derives its power from a solar array system on the rooftop of Truck & Trailer Service Ltd., in East New York, Brooklyn. Michael Rogers, owner of the truck repair and customization firm, said that as a host, he receives a rebate from the New York State Energy Research and Development Authority, along with a city real estate tax abatement.

“If I see that I’m saving money, I can use that to train and hire more people,” said Mr. Rogers, who considers himself environmentally conscious (he drives a Tesla). He said that several area business owners are keen to see how the system pans out for him before leasing their own rooftop spaces.

“I love everything about community solar, so I don’t mind being the guinea pig,” he said.

Marc Weiss, a townhouse owner in Manhattan’s Union Square area who signed up with a community solar group run by Gotham Community Solar and CleanChoice Energy, said he was game for any program that would decrease his carbon footprint. He was disappointed to find that his own rooftop wasn’t ideal for solar panels when he inquired about installing them a few years ago.

“I’m expecting solar power will be a main energy source for many communities in the future, so joining a community solar group is my vote for that,” said Mr. Weiss, whose solar power comes from an array atop a building in Gowanus, Brooklyn.

A partial list of community solar groups can be found at the New York State Energy Research and Development Authority and Sustainable CUNY.