Pro-Solar Group Gets On Duke Energy’s Bad Side 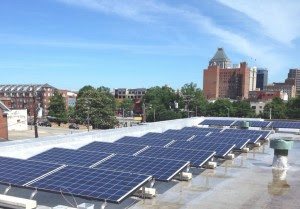 Duke Energy wants to smack down NC WARN for setting up a small experimental solar project on the rooftop of Greensboro’s Faith Community Church and testing a state law prohibiting third-party electricity sales in North Carolina. Photo by NC WARN

Duke Energy wants to smack down a small nonprofit for testing a law prohibiting third-party electricity sales in North Carolina.

As the Greensboro News & Record and other outlets reported today, the nation’s largest utility is asking state regulators to fine Durham-based NC WARN “up to $1,000″ per day for setting up a small experimental solar project on the rooftop of Greensboro’s Faith Community Church.

In a statement this morning, NC WARN Executive Director Jim Warren said Duke’s tactics are meant to punish and silence one of its most persistent critics. Warren says the fine, which could total more than $120,000, is “vindictive and counterproductive.”

The North Carolina Utilities Commission is expected to decide whether the project is legal, and whether NC WARN should be fined, later this month.

Today’s news is just the latest development in a local fight with statewide implications that has been brewing since early summer. NC WARN first announced back in June that it had entered a partnership with Faith Community Church to install solar panels and sell the clean power to the congregation while also purposefully putting itself “on a collision course” with Duke.

The same day, the group filed a petition with the N.C. Utilities Commission asking it to rule that the partnership is lawful, even though third-party sales in North Carolina are not. That’s where the legal lines blur.

Duke’s immovable position is that NC WARN showed “blatant disregard for the law” by setting up the third-party agreement and that it is essentially acting as an unregulated utility. NC WARN argues that by paying the upfront costs of the solar panels and selling electricity to the church for a reduced rate that it is offering a public service.

It’s up to the commission to decide whether North Carolina’s law against third-party sales applies when the profit motive is not part of the equation. But even if commissioners do rule in Duke’s favor, it’s hard to see how the massive utility can win the PR battle. The company is certainly not helping its reputation as a monopoly willing to quash any clean energy efforts except its own.

The merits of increasing access to solar speak for themselves. Allowing third-party sales of electricity is one of the most successful methods for making renewable electricity more affordable. It increases consumer choice and competition among suppliers, and it has been a boon to the the nation’s clean energy economy.

Third-party sales of electricity are also completely legal in all but four states, including North Carolina, and solar financing arrangements are available to most electricity consumers in the country.

In fact, the N.C. General Assembly had a chance during the legislative session to pass a Republican-sponsored, bipartisan bill to legalize third-party sales that was supported by the solar industry and major employers including Wal-Mart, Lowes and Target. It did not.

In the case of NC WARN versus Duke Energy, the cliche comparisons to David and Goliath would be apt if they weren’t so inadequate. NC WARN is more like a fly that landed on Goliath’s nose — a nuisance, sure, but essentially harmless.

The array on Faith Community’s roof is around five kilowatts. It produces barely enough power to run the church’s central air conditioning for one hour each day, according to NC WARN. Can a company that made nearly $3 billion last year justify imposing a $120,000 fine for what probably amounts to a few hundred dollars of lost sales?

Also, NC WARN has repeatedly called the partnership a “test case” and promises to donate the solar system to the church if the commission decides the partnership isn’t legal — another reason Duke’s request for the fine seems spiteful.

It’s what the group is trying to accomplish that has Duke’s executive gritting their teeth and telling their lawyers to attack.

So, I suppose it follows that, for all but a few, North Carolina’s law barring third-party sales does not.

Stay informed by subscribing to the Front Porch Blog.