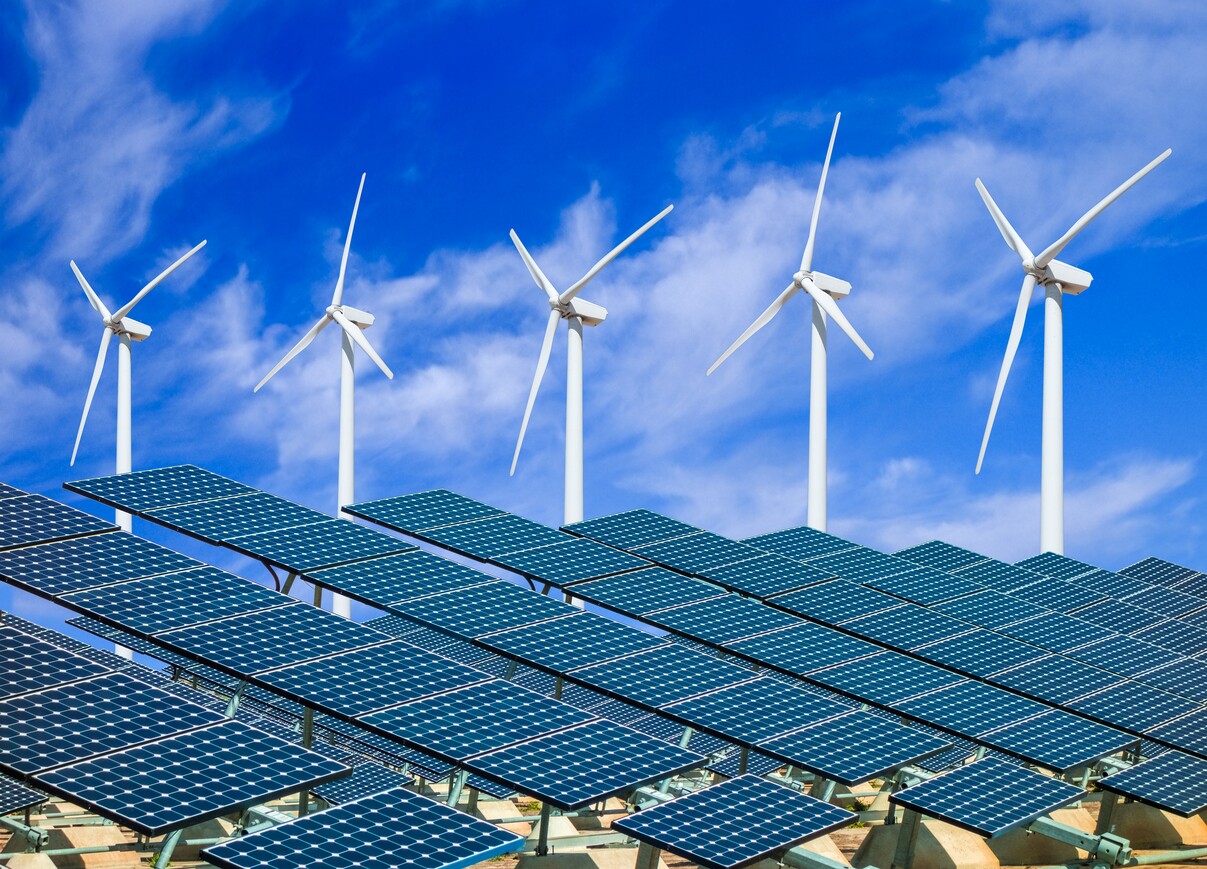 There are now nearly 3.2 million clean energy jobs in America, and the industry employs more workers than the fossil fuel industry in 42 states and Washington D.C., according to the nonpartisan business group Environmental Entrepreneurs.

Republicans used to deride so-called “green jobs” when former President Barack Obama promised to create millions of them with subsidies and loan guarantees. Mitt Romney, the GOP nominee for president in 2012, attacked Obama's "unhealthy obsession with green jobs." During a campaign stop in Colorado, he famously asked mockingly, "Have you seen those jobs anywhere?"

But now that those jobs exist — increasingly in rural, Republican-leaning states and districts — GOP lawmakers at the state and federal level are dropping the “green” moniker, and boasting of clean energy credentials ahead of the 2018 midterm elections. They are doing so even as President Trump has prioritized restoring coal jobs, of which there are half as many as solar.

“Republicans are seeing a huge number of big paying jobs being created in their districts and in their states,” said Dan Reicher, the Assistant Secretary of Energy in the Clinton Administration who was formerly Google’s director of climate and energy. “It’s the economic reality. It was inevitable they would come to this conclusion."

The economic numbers are stark for clean energy, a category that supporters define as including jobs in solar, wind, energy efficiency, and electric vehicles.

There are now nearly 3.2 million clean energy jobs in America, and the industry employs more workers than the fossil fuel industry in 42 states and Washington D.C., according to the nonpartisan business group Environmental Entrepreneurs.

Solar panel installers and wind turbine technicians are the two fastest growing occupations in America, the Bureau of Labor Statistics says. California, unsurprisingly, has the most clean energy jobs, ranking first in solar and fifth in wind.

"We have the Mojave Desert in my district, and it has a lot of wind and sun," said Rep. Steve Knight, a Republican running for re-election in California's 25th District, just north of Los Angeles, which is one of Democrats' biggest targets. "It makes sense we use those two resources to provide power," he told the Washington Examiner in an interview.

In his bid to retain office, Knight, a veteran and former Los Angeles police officer, is promoting a bill he authored that would encourage Energy Department investment in large-scale energy storage technology that can capture excess wind and solar energy to allow power from those sources to be used during non-windy and sunny times.

Solar and wind are also plentiful in Republican areas of the country.

Republican-led Texas has the most wind generation. Indeed, four rural Republican states — Kansas, Iowa, Oklahoma, and South Dakota — generate more than 30 percent of their electricity from wind, and employ together more than 9,000 people in that industry.

The Solar Energy Industries Association says that 13 of the top 25 congressional districts for solar generation are represented by Republicans.

“These are attainable jobs that can be done by anybody,” said Bob Keefe, executive director of Environmental Entrepreneurs. “They are being done by people in communities all across America — Republicans, Democrats, and everywhere in between.”

Environmental issues and climate change polarize America, and rank low among voters’ priorities. However, renewable energy, and the jobs it creates, now unite Republicans and Democrats.

Conservative states are as likely to support renewable energy and energy efficiency policies as liberal states, according to a 2016 study led by researchers at Vanderbilt University.

“We are absolutely seeing a change,” said Heather Reams, managing director of Citizens for Responsible Energy Solutions, a conservative group. “Republicans who believe their constituents aren’t there yet on climate can still embrace clean energy and do a lot with jobs and the economy, but still be reducing emissions."

Dylan Reed, head of congressional affairs for Advanced Energy Economy, says a Republican running in a swing district cannot afford to oppose clean energy when the job benefits are so widespread.

“You aren't going to win a race by running strictly on clean energy,” Reed said. “You don't have to be out there with the first shovel. But you can't be out there saying these are fake jobs."

William Timmons, the Republican nominee to replace retiring Rep. Trey Gowdy in South Carolina’s 4th District, acknowledges the top issues in his campaign are kitchen table concerns like the national debt, immigration, and national security. But he also has solar on his mind, viewing the energy source as a cheaper and clean alternative to nuclear power, in a state where a recently canceled nuclear plant construction project could cost taxpayers billions of dollars.

“I view it as national security issue, having a diversified energy portfolio as a country,” Timmons, a 34 year-old entrepreneur and state senator, told the Washington Examiner in an interview. “There is also an environmental component, where regardless of your thoughts on climate change, renewables just make sense. We should harness it however we can.”

But he, and other conservatives, concede those policies helped wind and solar advance to the point that renewables are cheaper today and now able to beat out coal and nuclear power, and sometimes even natural gas, in competitive energy auctions.

“If all else is equal and I can get solar energy for the same price with no emissions vs. fossil fuels that have emissions, I don't see any reason not to go the cleaner route,” Timmons said, adding that solar supports about 700 to 800 jobs in the South Carolina district he aims to represent. “This is the free market working.”

Sen. Dean Heller of Nevada, engaged in a tough re-election fight, has touted his role in preserving tax credits for wind, solar, and electric vehicles in the GOP tax reform bill, after the more conservative House had tried to scale them back.

Heller’s state is home to more than 21,800 renewable energy jobs, and it gets about 23 percent of its electricity from renewable sources. Tesla has a massive factory in Nevada that manufacturers batteries for electric vehicles.

To boost his standing in his tight Senate race, Heller is drumming up support for his legislation that would extend the $7,500 per vehicle tax credit for electric and plug-in hybrid vehicles, lifting the individual manufacturer cap.

“I am committed to championing solutions that will enhance our nation’s clean energy production as part of an all-of-the-above energy strategy because I believe that renewable energy is Nevada’s — and this country’s — future,” Heller told the Washington Examiner in a statement.

Conservative clean energy advocates also credit Republicans such as Sen. Rob Portman of Ohio, whose state is a major manufacturer of wind turbine components, for largely eliminating provisions in early versions of the tax bill that would have made it more expensive to finance wind and solar projects.

“There is this knee-jerk reaction that conservative energy comes from the ground,” said Mark Pischea, president of the Conservative Energy Network, and a Republican political consultant. “Changing those deeply ingrained opinions takes time. There is disagreement over how much how fast, and what we are willing to pay. But conceptually we have really jumped that bridge.”

Pischea, and other clean energy advocates, say they aim to work with an emerging class of younger Republicans to focus on conservative-friendly issues such as updating rules in electricity markets to remove barriers to competition for distributed energy resources — solar panels or home batteries, for example — that can generate, store, and manage their own electricity, and diminish the stress on the main power grid.

“There is a higher energy IQ for younger legislators who grew up talking about climate and seeing imagery of turbines and solar panels,” he said.

Timmons, the 34-year-old House candidate from South Carolina, said he favors reforms like these, but not because of his age. He is currently constructing a new home for himself equipped with rooftop solar panels, because it makes sense.

“I am not sure it's generational,” he said. “I am working on building a little farm, and I just think it would be good to not have to call my local energy company to ask to turn my power back on during blackouts.”