Duke Energy (NYSE:DUK) has significantly ramped up its solar PV ambitions over the past few months, despite being the largest fossil fuel power holding company in the world. After acquiring a large stake in REC Solar (OTC:RCLRF) in order to increase its presence in the large-scale commercial solar sector, Duke Energy is now planning to install 500 MW worth of utility-scale solar projects in Florida by 2024. Despite the fact that solar is still a tiny part of Duke Energy's entire business profile, the company's increasing interest in the promising solar PV arena is exciting, nonetheless.

Duke Energy is among a very few utility/power companies making a concerted effort to adopt solar. Given the fact that fossil fuels still dominate the energy industry by far, a disregard of solar PV by utility/power companies is understandable. Fortunately for Duke Energy, the utility/power industry's disregard of solar puts the company in a great position. Duke has untold billions in assets, which gives the company an extremely large competitive edge over pure-play solar companies. At the same time, Duke Energy also holds a competitive edge over its fossil fuel company counterparts with its forward-thinking solar PV involvement.

Most companies that are involved in the solar industry are still small and young from the energy industry's perspective. Duke Energy is an established company in the enormous fossil fuels industry, which means that it commands a significant financing edge over the solar pure-plays. The company has nearly unrivaled resources for its solar ambitions, making it especially well-suited for this high-growth industry. While Duke is still lagging behind solar standouts such as First Solar (NASDAQ:FSLR) or SunPower (NASDAQ:SPWR) in terms of solar installations, the company could likely ramp up its operations with ease.

Not only does Duke Energy have a vast reservoir of resources at its disposal, but it also has the advantage of having a huge customer base. The company's regulated utilities serve approximately 7.2 million customer in some solar-friendly states (climate-wise), such as Florida and the Carolinas. Given its huge customer base, Duke Energy has the additional benefit of being able to cross-sell its solar products, should the need ever arise. For instance, if the company decided to stake a large foothold in the residential solar segment, it could easily do so by selling solar products to its already established utility customers. There are approximately 500K residential solar customers in the United States, which means that Duke Energy could easily make a big impact in the residential solar markets, should it choose to do so.

Many of the states that Duke Energy operates in are extremely underpenetrated in terms of solar PV. Florida, for instance, ranks as the third-most promising state in terms of overall solar potential, but ranks 13th in terms of total solar PV capacity installed. This disconnect largely stems from the anti-solar politics in the regions, which has hampered the growth of its solar markets. Ironically, this is great news for Duke Energy, as it means that the largest solar competitors have not yet cemented deep footholds in the region. This will give Duke Energy a significant opportunity to position itself as one of the leading solar PV providers in the vastly promising Florida solar market. Given the company's already heavy business presence in the region, it will likely have an easier time establishing itself as a strong solar presence.

This scenario has already played out to a degree in the Carolinas, another regions which Duke Energy has a heavy presence in. Last year, for instance, the company announced its intentions to invest approximately half a billion dollars (278 MW of solar PV) in North Carolina solely on utility-scale solar projects. As a result of this investment, Duke has become one of the leading solar PV providers in the state. The company also intends to build 110 MW worth of solar PV in South Carolina in 6 years' time, which will surely cement Duke Energy as one of the premier solar companies in the Carolinas. Much of this was very likely only possible due to the company's established connections in the area, huge financial clout, and an early-mover advantage.

Here is a list of the Duke Energy's current solar projects. Notice how heavily concentrated the company is in the underpenetrated market of North Carolina. With Duke's recent planned investment into the Florida solar market, the company should become a heavy presence in this underpenetrated region as well. 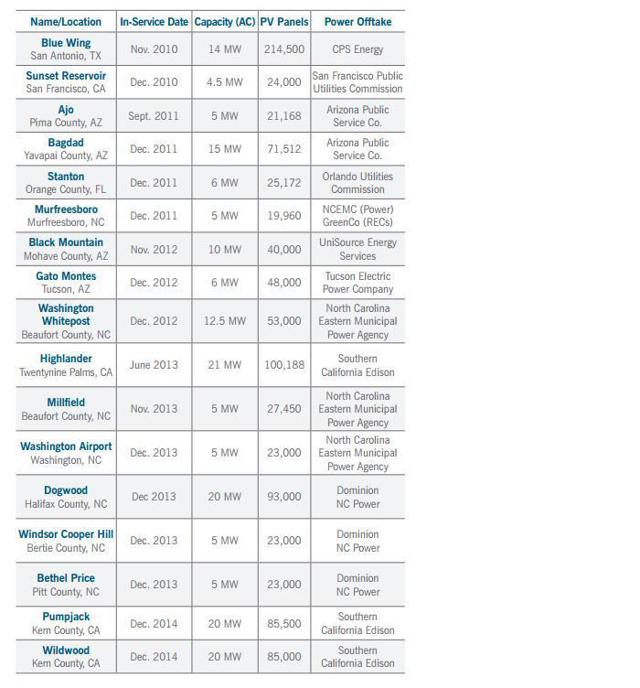 Duke Energy has already invested approximately $4B in solar and wind projects, and plans to a few billion more in the next half-decade. It would not be surprising to see the company increase its solar investment target moving forward, given the declining cost curve of solar PV technologies. While wind has plateaued somewhat in recent years, solar PV is growing faster than ever. As one of the few utility/power companies getting involved in the solar PV space, Duke Energy is way ahead of the curve in terms of the changing energy landscape.

As an operator of centralized utilities, distributed solar projects may actually be counterproductive to Duke Energy in the short run. This could partially explain why the company is focused more heavily on utility-scale solar, as opposed to residential solar. As distributed solar represents a threat to Duke Energy's centralized utility business model, the company may feel some short-term pain if it decides to increase its presence in this solar segment. For instance, if the company decides to sell distributed projects to its residential utility customers, this may actually do more harm than good in the short term.

For every residential utility customer Duke Energy cross-sells distributed solar projects to, that is one less customer paying for its centralized energy, and therefore one less customer helping to pay for grid maintenance. In the long run, though, the company should be able to significantly benefit if it can cement a presence and brand name in the distributed solar markets. This will allow Duke to rely less heavily on its established utility customers, and more on completely new customers to sell its distributed solar products to. On the other hand, utility-scale solar does not come into conflict with Duke Energy's centralized business model at all, making it a smart investment no matter what.

With over $100B worth of fossil fuel-related assets, the company does not need to worry too much about its solar ambitions coming in direct conflict with its fossil fuels business anytime soon. Solar PV still represents a small fraction of the company's entire business profile. In any case, the long-term benefits of cementing its brand and presence in the solar market make any short-term pains more than worth it. The energy landscape is undeniably changing, and Duke Energy is doing an great job of transitioning its business model to be more inclusive of all energy types. While fossil fuels will likely continue to make up the vast majority of Duke Energy's business in the foreseeable future, the company is setting itself up well for solar PV's imminent onslaught.

Duke Energy is currently one of the largest utility/power companies in the world, and as such, commands an enormous amount of resources. The company could easily become a dominant presence in the highly promising solar industry, which is, in fact, already happening in some states. Duke Energy's market capitalization of $54.4B does not fully factor in the company's solar PV potential. On top of this, the company has been growing at an incredible rate, nearly doubling its net income to $2.46B in a mere 4 years' time. This growth is surprisingly high for a utility/power company, and should only be bolstered by the company's burgeoning solar segment. Individuals looking to invest in the solar sector without taking on the volatility of solar pure-plays should consider buying Duke Energy.