Duke Energy: The Dark Side Of Solar Energy

Disclosure: The author is long SCTY.  The author wrote this article themselves, and it expresses their own opinions. The author is not receiving compensation for it (other than from Seeking Alpha). The author has no business relationship with any company whose stock is mentioned in this article.

Similar German policies, which advocated for renewable energy, resulted in large losses for German utilities that focused on fossil fuels.

Duke Energy, which has a large stake in fossil fuels, may not be a safe investment as the United States enters into a brave new world of renewable energy generation.

Duke Energy is in the electric generation, transmission, and distribution business. The company has a total capacity to generate 57,500 MegaWatts of electricity. The company's energy portfolio primarily consists of fossil fuels, broken down into 38% coal, 38% fuel, 17% nuclear and 7% hydro/solar. The company maintains 262,900 miles of distribution wires and 32,400 miles of transmission wires. The company services 23.0 million residents and generates $23.9 billion in revenues. Duke Energy's activity is best summarized by the figure below. The slide was provided courtesy of Origin Energy. 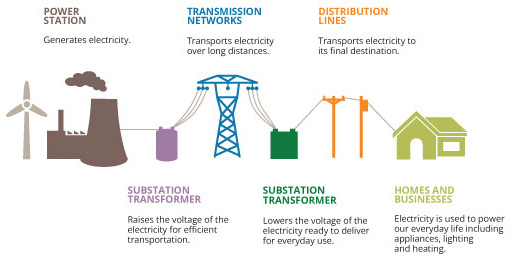 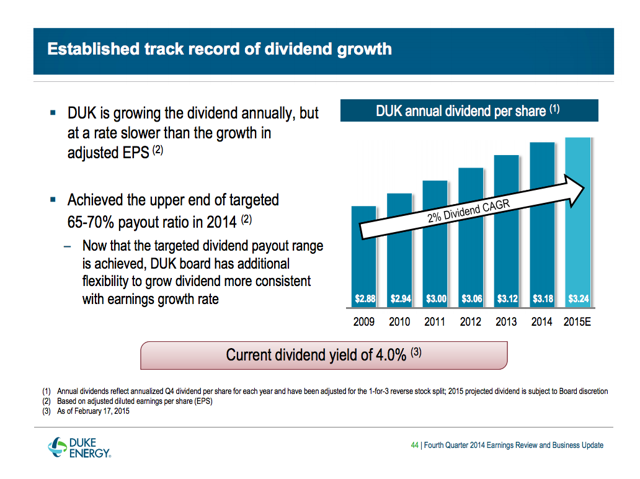 The Disruptive Potential of Solar

However, solar energy poses a threat to Duke Energy. While solar energy only generates 1% of the electricity in the United States, it is the time of day at which it generates electricity which causes the biggest troubles for utilities.

Under the current system, electricity prices spike during peak hours in the afternoon and early evening. Companies, like Duke Energy, make all of its money during peak hours. But the afternoon is when solar generation is strongest. Net-metering policies allow solar to receive grid priority. Therefore solar grabs a majority of the peak demand.

Accordingly, gas/fuel power plants, which provides peak energy, is the first to suffer the effects of solar energy. Unfortunately, Duke Energy's portfolio comprises of 38% of gas/fuel. The figure below, provided courtesy of Citigroup, demonstrates how solar has stolen the peak of electricity demand, when the prices are the highest, and displaced gas/fuel-fired capacity.

Duke Energy has realized the disruptive potential of solar and has started its own solar program. The company purchased REC Solar for $225 million. REC Solar provides comprehensive solar and energy solutions nationwide.

Therefore, it is important to monitor the changes in net metering policies, which could allow Duke Energy's solar leasing program to become more cost competitive. Furthermore, policy changes could replace antiquated pricing structures and allow utilities to adequately recover costs from customers with solar panels that intermittently utilizes the electric grid. The Edison Electric Institute, which represents all investor-owned utilities on Washington D.C., proposes the following changes to net-metering policies:

Net metering policies and rate structures in many states should be updated so that everyone who uses the electric grid helps pay to maintain it and to keep it operating reliably at all times. This will ensure that all customers have safe and reliable electricity and that electric rates are fair and affordable for all customers. Current state net energy metering policies that compensate at the retail price for electricity sales to the utility are outdated and need to be updated to align with today's technology and the ongoing transformation of the grid.

The decline of Europe's utilities has certainly been startling. At their peak in 2008, the top 20 energy utilities were worth roughly €1 trillion ($1.3 trillion). Now they are worth less than half that. Since September 2008, utilities have been the worst-performing sector in the Morgan Stanley index of global share prices. In 2008 the top ten European utilities all had credit ratings of A or better. Now only five do (The Economist).

Germany's renewable energy policies are the primary culprit of the country's proliferation of solar technology. This policy increased solar capacity in Germany from 4GW in 2007 to 33GW in 2012 as shown below. The following charts were provided courtesy of Citigroup.

More startling is that Washington D.C. have passed similar solar energy initiatives. The Renewables Portfolio Standards (RPS) policy will increase solar capacity, in the U.S., from ~20GW to ~93GW in 2035. The slide below provides Washington D.C.'s RPS policies as described by The Berkeley Lab. 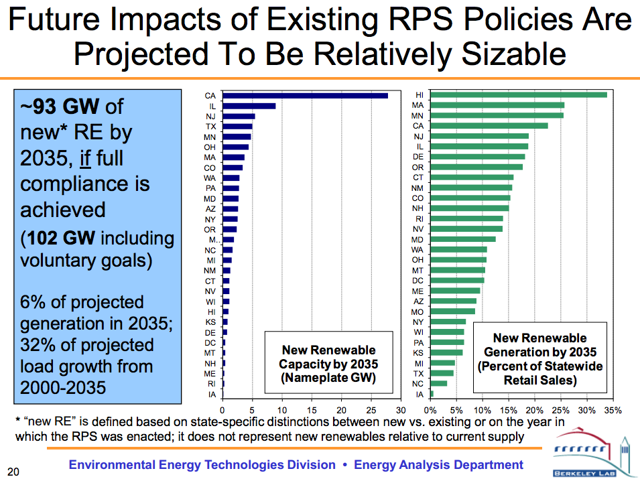 Duke Energy may not be a safe investment as the U.S. enters into a brave new world of renewable energy. Duke Energy makes the bulk of its profits during peak hours, in the afternoon, when prices are the highest. However, these profits are eaten away by solar panels. These profits will be further eroded as Washington D.C.'s initiatives, namely the renewable portfolio standard, will increase solar capacity from 20GW to 93GW in 2035.

Similar renewable energy initiatives, in Germany, resulted in the proliferation of solar technology. Similar antiquated electricity pricing policies did not allow utilities to be adequately compensated for providing electricity when solar could not. The confluence of these factors resulted in large losses in German utilities.

Therefore, it is important for an investor to monitor how Washington D.C. restructures its net-metering policies and the renewable portfolio standards. Changes to these policies may allow renewable solar energy to grow hand-in-hand with utilities.