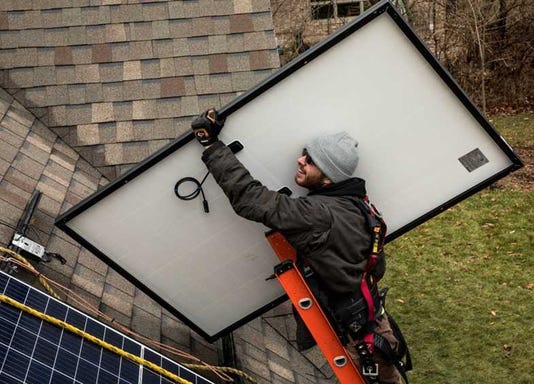 MUNCIE, Ind. —  Retired Ball State University professors Carolyn and John Vann used to attract crowds of several dozen people to meetings at which the couple would sign some up to add solar panels to their homes.

Nowadays, the two grass roots solar advocates are frustrated. "We hold a meeting and no one comes," Carolyn Vann said.

A recent meeting at the Kennedy Library drew an audience of just two people, and they were invited by John Vann, who knew them from the YMCA.

The Vanns set up for a presentation in Yorktown and no one attended.

The couple attributes the lack of solar interest/awareness to net metering, which Indiana's Senate Bill 309 changed in 2017.

"That's one of the things that has made it more difficult for us," John Vann said. "There was so much press coverage of the bill and so much debate, and now no one's talking about it."

When Vann spoke to some BSU faculty members recently about going solar, he learned they mistakenly believed "you don't get net metering any more."

In fact, SB 309, championed by the state's powerful utility industry, phases out net metering — which requires utilities to pay solar users for any excess energy that is created by their solar panels — but it didn't immediately eliminate net metering.

The program was intended to provide an important incentive for Hoosiers to install expensive solar panels and produce their own energy that is better for the environment.

Thanks to SB 309, there was a rush to install solar panels before December of 2017 because customers who entered into net metering contracts before that date were able to continue their contracts for 30 years (until July 1, 2047). 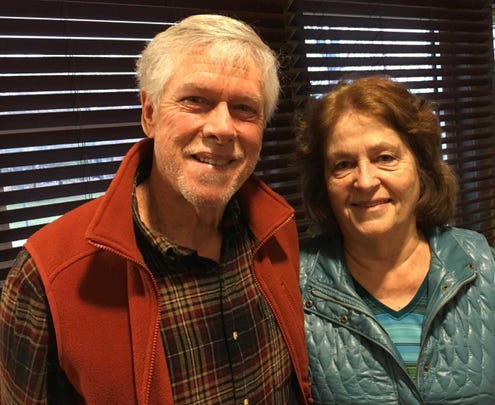 "Then there are four things," John Vann added. "The fourth is: businesses, including farms, can depreciate the solar system. So they get the federal tax credit and can depreciate it in as little as one year."

There are really more than three or four benefits to going solar. For example, solar installations don't increase the assessed value of a home for property taxation purposes but typically add 15 percent to the sales price of a home, according to the Vanns.

Carolyn Vann is a retired biology professor. John, her husband, is a retired marketing professor. Both are deeply concerned about climate change. During a recent interview, Carolyn said, in reference to the phaseout of net metering in 2032, "We'll be dead by then," referring to death from climate change, not natural causes.

In 2006, when John Vann met and became one of former Vice President Al Gore's climate-change messengers, he told The Star Press, "I've become convinced there is nothing more important as a threat to humanity than global warming."

"It started in Bloomington," Carolyn Vann said of the Solarize initiative. "They're way ahead of this stuff. They've done hundreds of installations."

Solarize ECI was an offshoot started and operated by the Vanns and other grass roots volunteers who are unpaid. The Vanns pay expenses out of their own pockets and have had trouble finding meeting places at no cost.

Solarize Indiana sent out requests for proposals to solar companies in the Midwest, looking at reliability, product quality, tenure in business and lowest group pricing. From those companies, Solarize ECI chose to work with Icon Solar, Cincinnati.

The Vanns themselves participated, getting 30 solar panels, for which they paid about $26,000 before the federal tax credit; they will end up paying about $16,000. The couple live in Henry County and had their panels mounted on a barn, though they provide electricity to their house.

Solar panels also can be mounted on the rooftops of garages, houses and other buildings (not on a north-facing, however) or ground mounted.

The Vanns say they installed more solar panels than normal for a residence.

For example, Solarize ECI volunteer Sheryl Swingley, a lecturer in the journalism department at Ball State, paid a more typical $12,000 for her residential solar system and received a $3,600 tax credit.

John Vann contacted The Star Press after being interviewed to add this thought: "I know we talked a lot about the financial benefits of solar, but our major motivation is to reduce greenhouse gas emissions." 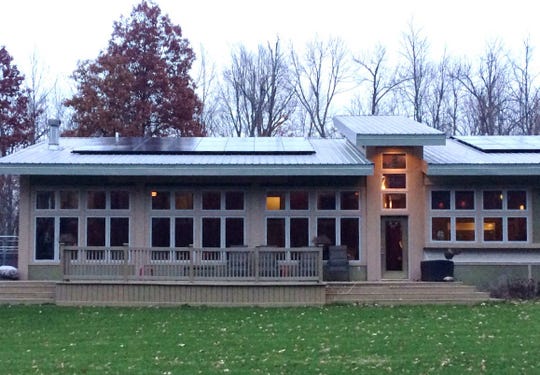 One of more than 40 houses that have had solar panels added to their roofs in East Central Indiana through Solarize ECI. (Photo: Photo provided by Solarize ECI.)