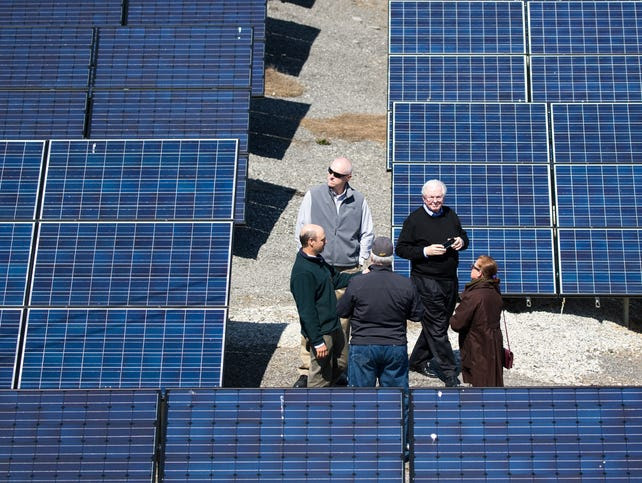 Mark Mahan, Special to The CJ
A group from Solar Over Louisville toured the Berea community solar array on March 23, 2016, in Berea, Ky. less

But it was the first in Kentucky of what insiders call "community shared solar" – solar-electric systems that provide power or financial benefits to their members or participants. They're especially useful to people who cannot or do not want to put solar panels on their roofs but still want to offset their energy use with clean power from the sun.

More than 150 people have leased the solar panels in Berea. They paid a one-time leasing fee of $750 at an array built and run by Berea Municipal Utilities. In turn, the customers get a few bucks off their electricity bills each month for 25 years. Their return on investment will take two decades. But that wasn't really the point.

"People were interested in doing something toward an energy transformation in Kentucky," recalled retired Berea College mathematics professor Steve Boyce, a driving force behind the project. Participation was, he said, "out of an urge to be able to do something when we were not getting any leadership on sustainability nationally nor in Kentucky."

Cheap electricity rates from burning coal and now even cheaper natural gas – and state energy policy – still make it hard in states like Kentucky and Indiana for solar to compete on the bottom line. But that seems to be changing as the cost of solar falls and is expected to decline up to 12 percent per year through 2020, according to the Energy Department.

Despite its small size, the Berea example is stirring the imagination of the organizers of the new Solar Over Louisville push backed by Mayor Greg Fischer. It calls for 2 megawatts of solar capacity to be installed in Louisville this year. Community solar is one option those organizers are examining.

"It opens the doorway to what we could have," said Nancy Givens, a Solar Over Louisville volunteer, on a tour of the Berea facility in March. "We're looking at how we can take baby steps. We still don't have policies in place, but we have a lot of interest."

Indiana touts its sunshine, and Indianapolis was recently ranked second in the nation for solar panel capacity per capita behind Honolulu in the Environment America 2016 Shining Cities report. By contrast, Louisville was dubbed a "solar beginner."

Kentucky's 2008 energy plan found that the Bluegrass state has ample amounts of sun for solar power. 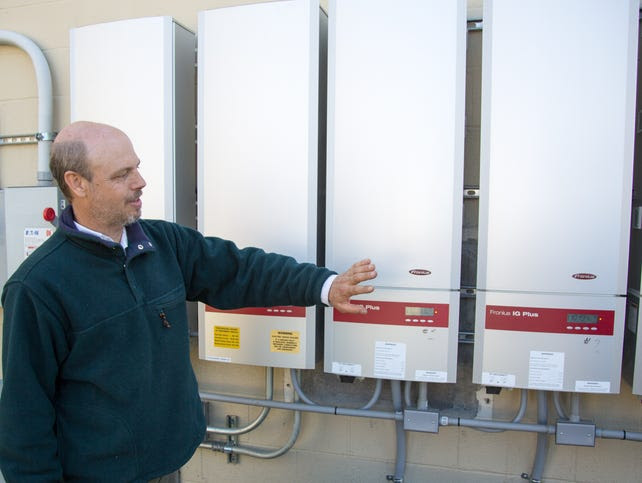 Joshua Bills, energy expert with the Mountain Association for Community Economic Development, pointed to the solar inverters during a tour of the Berea community solar array on March 23, 2016, in Berea, Ky. (Photo: Mark Mahan, Special to The CJ)

"People think we don't have enough sun, but we do," said Joshua Bills, an energy expert with the Mountain Association for Community Economic Development in Berea.

In states long dominated by coal, even utilities are starting to notice the sun.

They are part of a national trend, according to a recent report by the Deloitte Center for Energy Solutions. Deloitte found that there was one such solar project in 2010 in the United States.

"Utilities are finding that shared solar allows them to grow their solar generation portfolios, developers are seizing the opportunity to expand their business offerings, and more customers have the chance to buy solar power," the study says. "By unlocking value in each segment of the supply chain, community solar is evolving into a growth engine for distributed solar resources."

East Kentucky Power Cooperative has 16 member-owned distribution co-ops with 527,000 customers in 87 counties. It plans to take a proposal for community solar to the PSC this spring. The idea is to construct an 8.5-megawatt solar farm on 60 acres near its headquarters in Winchester, then license solar panels to the cooperatives' members, who would then get credit on their bills for energy produced by the sun.

Important details such as how much the licenses would cost and how participation would affect members' bills are still being worked out, said Nick Comer, East Kentucky Power spokesman. 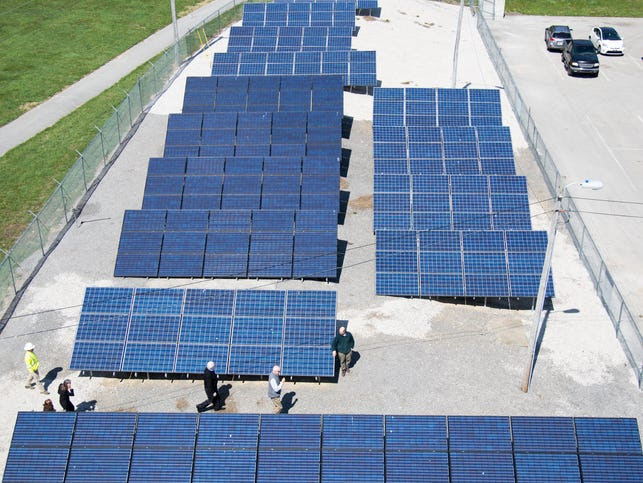 Mark Mahan, Special to The CJ

A group from Solar Over Louisville toured the Berea community solar array on March 23, 2016 in Berea, Ky.

The solar farm would generate enough electricity to power about 1,000 homes, he said.

"We have members who are interested in doing this," Comer added.

Louisville-based LG&E and KU Energy officials said their customers have asked for something similar, so they are developing their own community solar vision. They believe customers are ready to help them invest in that vision.

Those solar panels could be "on the lot next door or 50 miles away," or located on buildings or in parking lots, said John Malloy, vice president of customer service for LG&E and KU Energy.

In a program they also hope to get through the PCS this year, customers would pay a sign-up fee and subscription fees to help cover costs for the construction and operation of what they also call community solar.

LG&E's David Huff, director of customer energy efficiency, said participants would then get a pro-rated share of the electricity produced, similar to net-metering arrangements for customers who install their own solar panels on their homes or businesses.

Net metering credits customers owning solar panels with the electricity they add to the grid.

It's doubtful that the arrangement would result in smaller electricity bills at today's energy pricing, Huff said. Solar is still more expensive than coal or natural gas, LG&E officials said. But customers could find their investment a hedge against future rate increases, Huff added.

It's not community solar, but LG&E and KU Energy is preparing to dedicate its first solar array on April 19, just in time for Earth Day on April 22.

Crews have been erecting 45,000 solar panels on 50 acres in Mercer County adjacent to the company's E.W. Brown power plant. Those 10 megawatts should generate enough electricity for about 1,750 homes.

"It was put in at that size so we can get better experiences how solar is going to work in our company," said Scott Straight, LG&E and KU Energy's director of project engineering. He said it's expected to cost about 10 percent less than the budgeted $35 million, in part because the cost of solar panels fell rapidly during the project.

Electricity generated from that array will flow into the grid, just as at any other of the company's power plants.

LG&E and KU Energy is also this year developing a new program for large-scale industrial or commercial businesses that want to tap the sun while ensuring those costs won't be subsidized by other customers, Malloy said.

Indiana has a handful of utility-run community solar projects largely run by electric cooperatives, but the concept has not taken off because of legislative obstacles in Indiana similar to those in Kentucky, said solar advocate Laura Arnold, president of the Indiana Distributed Energy Alliance.

When she and other solar advocates discuss community solar, they describe an entirely different model from one put forward by LG&E and East Kentucky Power, where the utility is at the center.

They see regulated utilities' efforts to create more community-based solar projects as an alternative to supporting better, more open net metering policies and to keep control, Arnold said. That utilities have adopted the community solar name for their efforts even bothers some, said Bills.

Arnold said that different vision places a neighborhood at the center. Residents, businesses and churches come together to establish their own solar installation. And using net metering, the electricity it generates offsets each participant's bills.

But neither Indiana nor Kentucky allows what's called virtual or remote net metering, where customers share benefits of electricity output from a single solar power project.

And to really encourage community solar, Kentucky lawmakers would also need to raise the individual system size cap to require net metering above 30 kilowatt systems, so more than only a few efficient homes could be on one system, Bills added.

Nationally, there's been tension between solar advocates and utilities, with utilities fighting to make sure all their fixed administration and power line maintenance costs are shared among all their customers, as many customers seek to lower their bills by generating solar power. That played out in a rate increase dispute last year with LG&E and KU.

Berea Municipal Utilities has more freedom because, as a city-owned utility, it doesn't fall under the regulation of the PSC. But it also has limits on its solar generation because of terms of its contract with Kentucky Utilities, said Ed Fortner Jr., the city's utilities director.

Still, he said, the small array has "got a lot of publicity. But this is the future – renewables, along with energy efficiency."