Solar Trade Case, With Trump as Arbiter, Could Upend Market 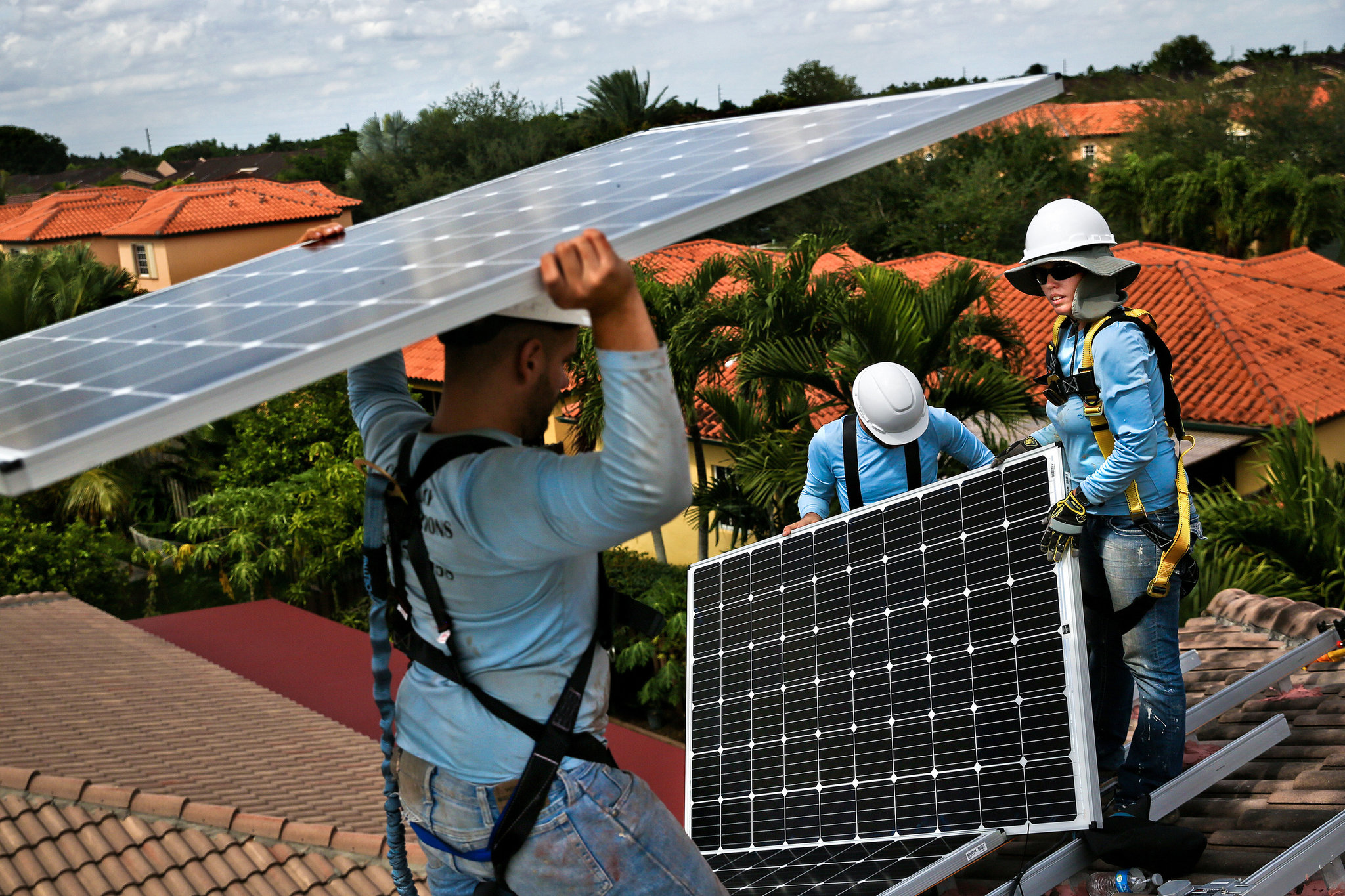 Technicians installing solar panels in Miami last year. A glut of low-cost supplies from overseas has driven down the price of the panels, making it difficult for American manufacturers to compete. Credit Scott McIntyre for The New York Times

Solar Trade Case, With Trump as Arbiter, Could Upend Market

Millions of Americans now get their electricity, at least in part, from the solar panels that have rapidly spread throughout the country since 2010, thanks to their sharply declining cost. For customers — including homeowners, businesses and utilities — as well as for the companies that promote and install them, cheap solar panels have been a good thing.

But for American manufacturers, those cheap panels — specifically, a glut of low-cost supplies from overseas — have not been a good thing, driving more than a dozen of them to the brink of bankruptcy and beyond.

Now, manufacturers are fighting back, in an unusual trade case that could put the final decision about government intervention, and any remedy, directly in President Trump’s hands.

The case, filed with the United States International Trade Commission, is shaping up to be one of the first major trade decisions of the Trump administration. The outcome could have a powerful impact on whether the American solar industry will be able to compete on cost with conventional fuels like natural gas and coal in producing electricity.

And China, Mr. Trump’s frequent foil on trade issues, has interests on both sides of the fight.

The cheaper equipment coming into the American market is often from Chinese manufacturers that the trade commission previously determined were dumping goods below cost, according to the petition. But the company that initiated the new case, Suniva, is an equipment maker based in Georgia whose majority owner is a Chinese company.

The petition seeks steep tariffs and minimum price guarantees on certain solar energy equipment made outside the United States. The commission is set to vote on the merits of the case by Sept. 22, and send any recommendations to the president by Nov. 13. But it is already reshaping the market.

Prices for solar panels have increased as buyers rush to get ahead of potential tariffs. Solar-farm developers have become skittish about long-term commitments to supply power at prices that could become uneconomical if tariffs, which can be applied retroactively, raise their costs.

“It clearly throws a wrench into what is already a challenged global market,” said Shawn Kravetz, president of Esplanade Capital, a hedge fund based in Boston that is focused on solar energy companies. “There are going to be winners and losers. The list of losers is long.”

Though Suniva, once lauded on the White House blog as “an American success story” during the Obama administration, originally filed the petition in April, it is in many ways the next skirmish in a protracted war between the United States and China that started in 2011. The dispute centers on crystalline silicon cells, the major electricity-producing components, as well as the modules, or panels, into which they are assembled.

Back then, SolarWorld Americas, a subsidiary of a now-bankrupt German panel maker, filed a trade complaint along with six other domestic solar manufacturers that accused their Chinese counterparts of using unfair government subsidies to finance their operations and then selling their merchandise for less than the cost of manufacturing and shipping it.

SolarWorld, which has joined Suniva’s petition, won that battle, as well as a second case that included Taiwan, where Chinese manufacturers had turned for cells to avoid anticipated tariffs.

After the imposition of tariffs beginning in 2012 that ranged from about 20 percent to about 55 percent for the largest cell and panel makers, manufacturers outside China and Taiwan — including those in the United States like SolarWorld and Suniva — saw their fortunes rise. In 2014, SolarWorld Americas, based in Oregon, announced a $10 million expansion of its plant and plans to hire hundreds more workers to meet surging demand for solar panels.

Suniva had grown out of government-supported research at Georgia Tech to become one of the largest American makers of solar cells and finished modules. But the much larger Chinese manufacturers that came to dominate the global market kept up the pressure on price. Seeking a much-needed infusion of cash to finance an anticipated expansion, Suniva sold a majority stake in 2015 to a Chinese company, Shunfeng International Clean Energy, which wanted to get a foothold in what it believed was a growing American market.

Then came a glut of cheap, new panels as Chinese manufacturers began operating or contracting with factories in countries like Malaysia, Thailand and Vietnam, the petition charges. Last year, the Chinese government suggested it might slash its domestic incentives for buyers of solar panels, sharply reducing demand for equipment and adding to the oversupply. Manufacturers cut their prices to compensate, which sent global prices plummeting. Even though China ended up shaving subsidies just slightly and only for large power-plant arrays, prices remained low.

As panel prices dropped to about 40 cents per watt in late 2016 from 57 cents per watt in 2015, American solar installations reached a record high, making solar energy the biggest source of new electricity generation last year. But the domestic industry’s share of the panel market, which had been declining since 2013, tumbled to 11 percent in 2016 from 17.1 percent the previous year, according to the market research firm IBISWorld.

In those conditions, Suniva could not compete as a supplier. Starting in March it shuttered its two factories in Michigan and Georgia, laying off about 250 workers, and in April it filed for Chapter 11 bankruptcy protection. About a week later, it secured a loan from one of its creditors to pursue the trade case.

With control of Suniva in the hands of the bankruptcy court, Shunfeng declared in May that it no longer supported the company’s trade case, saying it was “not in the best interests of the global solar industry.” It said in March that it would take a charge of roughly $38 million on its Suniva investment, though it could still benefit if the company prevails in the case.

Suniva argues that because of the global nature of the solar trade, the American manufacturing industry needs blanket safeguards from the trade commission that would apply to the crystalline silicon cells and modules manufactured anywhere outside the United States. It is the only way, the complaint argues, to keep manufacturers from circumventing tariffs aimed at specific countries by setting up shop elsewhere.

“Without global relief, the domestic industry will be playing Whac-a-Mole,” the petition says. “The way that the world’s largest producers have reacted to antidumping and countervailing duty claims demonstrates that global relief is required.”

But opponents say the case threatens many of the hundreds of thousands of workers whose jobs could be eliminated in an industry slowdown. Those include people who install, finance and oversee the development of large-scale solar projects, as well as manufacturers of support structures for the panels and devices that regulate the flow of electricity from them.

According to a report from GTM Research, a consultant firm that tracks the solar industry and provides data and analysis for the industry’s main trade group, the Solar Energy Industries Association, which is aggressively fighting the petition, a finding in Suniva’s favor could reduce expected installations over the next five years by 50 percent.

Adding to anxiety in the industry is the potential role of Mr. Trump, who would have broad leeway to determine how to proceed should the commission find that the domestic industry had been harmed by the surge in imports.

Though the president has pledged to increase manufacturing jobs, he has not offered the same full-throated support as his predecessor for solar energy. Proponents see solar energy as an important weapon in the fight against climate change, making its ability to compete economically with conventional sources — a concept known as grid parity — even more critical.

“Grid parity is of the utmost importance, so that we are competing on price and price alone,” Abigail Ross Hopper, chief executive of the solar trade group, said. “If you change the underpinnings of that, it undermines what we’re doing.”

If things go Suniva’s way, analysts say, other domestic manufacturers could also benefit, although the industry would most likely contract over the next few years.

Two makers of crystalline silicon cells and panels, SunPower and Solaria, are expanding their production capacity at factories in California. Then there is First Solar, based in Tempe, Ariz., which is also expanding production at its factory in Perrysburg, Ohio. The company mainly manufactures in Malaysia, but it uses a different technology and would not be subject to the trade restrictions. And if Tesla is able to get its troubled and much-delayed panel factory in Buffalo up and running, it could benefit as well.

Then, too, the major Chinese manufacturers are already exploring options for opening their own factories in the United States, said Ocean Yuan, chief executive of Grape Solar, a distributor of panels based in Eugene, Ore.

“There’s no other way for them to enter the U.S. except that they make panels in the United States,” he said. “So, I guess that’s the positive side.”