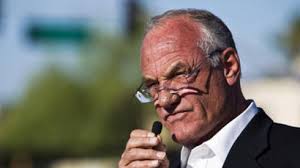 Former Republican Congressman Barry Goldwater Jr. and his conservative group Tell Utilities Solar won't be Killed (TUSK) is calling on legislators to reject this legislation, and maintain Michiganders' ability to choose solar energy as an energy option.  Currently, the legislation threatens to eliminate Michigan's most critical rooftop solar policy for consumers, called net metering, and replace it with a tax on Michiganders who generate their own electricity.

"As Michigan shapes its energy future with major legislation, monopoly utility DTE wants to protect its profits by eliminating your ability to choose solar energy. DTE is threatened by the choice and competition solar brings to consumers.

TUSK was formed to create a united front through which the public can tell utilities that solar is right for conservatives and right for America. http://dontkillsolar.com/