During the past decade, Gundersen Health System has tapped the sun, the wind, trees and even cow manure to heat about 2.6 million square feet of hospitals and clinics, earning a reputation as a national leader in environmental stewardship.

In short, renewable energy is an opportunity to save money and build wealth.

Tyler Huebner is the executive director of RENEW Wisconsin, which has been promoting solar, wind and other clean energy sources since 1991. For him, the goal is to advance renewable energy no matter who is in charge.

“We’re working really hard at RENEW to take the politics out and make it a lot more about business and jobs in Wisconsin,” Huebner said. “We’re sort of hopeful to make this a bipartisan opportunity for everyone in Wisconsin.”

As a group, conservatives have traditionally shunned renewable energy.

A right-wing think tank in Minnesota is currently waging a publicity campaign against wind energy. In fact, today’s wind turbines and utility-scale solar gardens are more economical over the long run than most coal plants. 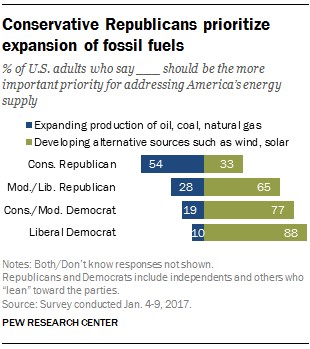 According to the Pew Research Center, only about 45 percent of Republicans say the U.S. should prioritize alternative energy sources (compared with 81 percent of Democrats). The majority of Republicans who identify as conservative favor fossil fuels.

Elizabeth Ward, conservation programs coordinator for the Sierra Club’s Wisconsin chapter, said renewable energy has been used as a wedge issue by politicians pitting the environment against jobs.

“Once one party’s really for it, it seems like the other party’s against it,” said Amber Meyer Smith, vice president for government relations at Clean Wisconsin. “It’s too bad because our polling has consistently shown a bipartisan approach.”

The U.S. subsidizes most forms of energy, but the tax credits attached to wind and solar typically get more attention than policies that support fossil fuels.

Coenen thinks renewables got caught up in the polarized, and often toxic, debate over climate change, which only 12 percent of conservative Republicans consider a threat to the nation’s well being, according to Pew’s surveys.

Bret Shaw, a professor at the University of Wisconsin-Madison who studies social marketing and communication related to environmental campaigns, said views on renewable energy depend more on how it’s branded, the rationale given and the source of the message. Conservatives might look favorably on renewable energy for national security purposes but balk if it’s presented as an environmental issue.

“The truth is it’s not really so simple,” he said. “It really is a more nuanced scene.”

While renewable energy has been a hard sell for many Republicans, polling data suggest there’s also a generational divide. Pew surveys found more than seven out of 10 Americans under the age of 50 favor developing alternative sources of energy. Support for renewables is strongest among millenials.

“Being kind of a younger guy I’ve never had the suspicious eye to this,” said Coenen, who is 28. “Younger voters, they’re prepared to embrace this more.” 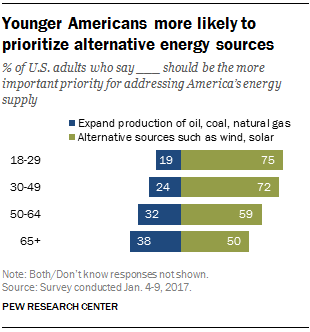 Despite the recent announcement of a major solar project, Wisconsin lags neighboring states in adoption of renewables and still relies on out-of-state coal for more than half its electricity, according to data from the Energy Information Administration.

Iowa generates nearly 40 percent of its electricity with wind, a higher portion than any other state, and Minnesota’s largest utility, Xcel Energy, is moving to shutter its largest coal plants.

“Even Illinois,” Coenen said. “We’re behind all the other states.”

Coenen, a former legislative aide, sees that as an opportunity for Republicans, who control Wisconsin government, to reshape the state’s energy policy.

Funded by the Conservative Energy Network, WCEF is focused on education rather than lobbying, and the organization hasn’t developed specific legislative goals.

But Coenen said there are some relatively easy things lawmakers could do now. For example, he notes the Public Service Commission has not developed guidelines for how to integrate battery storage into the grid.

“This technology is going to come down the line in five years, and we need to be ready for it,” he said.

This week Coenen led a contingent of local officials on a tour of some of Gundersen’s renewable energy projects, which include wind turbines, solar panels, a plant that generates heat and electricity from gases emitted from the La Crosse County landfill, and a digester that captures methane gas from cow manure and food waste.

A boiler that runs on wood chips from area saw mills provides most of the heat and steam for the La Crosse campus and generates about 2.5 million kilowatt hours of electricity, enough to supply most of the main clinic’s needs.

Not only is the wood cleaner and cheaper than natural gas, but it’s also home grown.

“Instead of purchasing that gas from Oklahoma or Texas, we’re purchasing wood from our tri-state area,” Rich said.

Between generation and energy efficiency efforts, Gundersen last year offset two-thirds of its fossil fuel use and generated more clean energy than it needed on 62 days. (When temperatures fall below 25 degrees the hospital still has to fire up natural gas burners.)

Though Gundersen touts the environmental benefits of its energy initiative, the original driver was economic: In 2008 Gundersen was spending $5.3 million a year on energy and looking at an additional $350,000 a year.

“That was cost that was going to patients,” Rich said.

Gundersen is one of 15 renewable energy projects that Coenen plans to highlight during the coming months, including a new Lafayette County wind farm that provides about 7 percent of Dairyland Power Cooperative’s generation capacity.

Coenen said his goal was to showcase a range of technologies and applications while highlighting opportunities for Republican lawmakers who represent most of rural Wisconsin.

“We’re not going to be putting a wind farm in downtown Madison,” he said. “That’s going to be in Lafayette County. That means investments and jobs in some parts of the state that really haven’t seen economic development.”

Loren Oldenberg, a Republican candidate in the 96th Assembly District, joined the Gundersen tour, which he said was eye-opening. Oldenberg, a Viroqua dairy farmer, said he’s for renewable energy so long as it pays for itself and that farmers are always looking for ways to cut costs.

“A farmer will not put money into it if they don’t see a return on investment,” he said. “There’s where maybe policies or programs can possibly help them get started on something.”

A place for gas but not coal?

Unlike other renewable energy advocacy groups, WCEF supports an “all of the above” energy approach. Coenen said that includes support for natural gas, which burns cleaner and produces less carbon dioxide than other fossil fuel sources. Utilities also view natural gas as a “renewable enabling” fuel because newer gas plants can more easily adjust output to fill in around intermittent sources such as wind and solar.

Groups like the Sierra Club oppose natural gas, in part because of the effects hydraulic fracture mining has on groundwater.

“The conversation should be how quickly we can get to 100 percent renewable energy,” Ward said. “The technology isn’t the problem. The problem is lack of political will.”

But Clean Wisconsin’s Meyer Smith said an all of the above approach would be an improvement for a state that has “shut out and deliberately shunned” renewables.

“We believe pretty thoroughly that coal is an energy source of the past,” Coenen said. “We need to let the market work.”