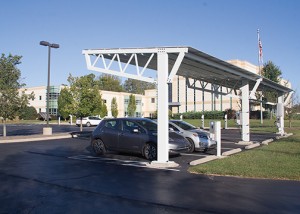 A PACE district is a special improvement district that any company can petition to join. It allows the company to make an energy efficient upgrade and pay it back on their taxes, said John McGraw, Union Township trustee.

Another advantage is that if the company sells their property, the new owners takes over the payments, McGraw said.

The energy investment will likely lower energy bills, and the savings companies have from this will likely pay for the cost of improvements, McGraw said.

“It’s just an avenue to help companies out if they choose to go this route,” McGraw said.

The township does not gain or lose anything by having a PACE district, McGraw said.

Melink Corporation was the main company that requested that the trustees approve a PACE district, which they did during the meeting on September 10, McGraw said.

Melink wanted the township to have a PACE district “to empower local businesses in investing in energy efficiency and renewable energy measures,” said Steve Melink, president.

He hopes this will help businesses invest the money they would have spent on energy on other things. Businesses could not get this long of a payback time with a conventional loan, he said.

Melink also plans to make improvements to his company’s campus, which he hopes will help show other companies how to utilize PACE.

He plans to add more solar to the company’s campus and to upgrade lighting to light-emitting diodes. Melink hopes to start on both projects before the end of the year, he said.

Melink said he’s also already hearing from other interested local businesses who want to make energy upgrades. PACE districts are becoming more and more common, which is good for the businesses who utilize it and for Melink’s company, he said.