US Sen. Smith Urges Nation to Follow Minnesota’s Lead on Expanding Use of Clean Energy 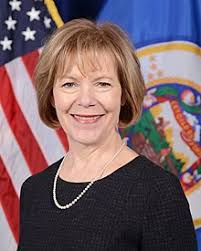 IndianaDG Note: Laura Ann Arnold participated in a Midwest Lobby Day on Capitol Hill with the Solar Energy Industries Association (SEIA) on 9/13/18. We visited with Pete Wyckoff, Energy & Environment Policy Advisor to US Senator Tina Smith of Minnesota who shared the following with us.

In Floor Speech on Climate Change, Sen. Smith Urges Nation to Follow Minnesota's Lead on Expanding Use of Clean Energy

WASHINGTON, D.C. [09/12/18]—In a speech delivered on the Senate floor, U.S. Senator Tina Smith (D-Minn.) said the push to fight climate change is not only urgent, but presents economic opportunities in Minnesota and across the country. She also criticized several actions taken by the Trump administration, including rolling back the Clean Power Plan and pulling out of the Paris Agreement.

Sen. Smith, a member of the Senate Energy Committee, said Minnesota has already benefited from the expanded production and use of clean energy, which has created jobs and economic development in communities across the state. She urged the rest of the nation to follow Minnesota's lead and take advantage of those same benefits. You can watch Sen. Smith's speech here.

“The old idea that responding to climate change would come at the expense of the American economy is outdated and inaccurate,” said Sen. Smith. “The clean energy economy is the economy of the 21st century. We are seeing that every day in Minnesota, which is a national leader in the clean energy transition.”

You can read a copy of Sen. Smith's remarks as prepared for delivery below:

(as prepared for delivery)

Climate change is a dire threat to our environment and to our children’s future. And yet, if we rise to the challenge of responding to climate change, it will offer us a major economic opportunity—the clean energy transition is already creating jobs, reducing the costs of generating electricity, clearing the air, and improving our health.

The old idea that responding to climate change would come at the expense of the American economy is outdated and inaccurate. The clean energy economy is the economy of the 21st century. We are seeing that every day in Minnesota, which is a national leader in the clean energy transition.

The climate is rapidly changing. These changes are caused by human activities that release greenhouse gases. I know this because it is what science tells us.

In Minnesota, we take special pride in the severity of our winters. But, Minnesota winter temperatures have increased by 6 degrees since 1970, and much more than our pride is at stake with this change. Agricultural and forest pests that were once held in check by severe winter cold are now thriving. Summer temperatures are on pace to make Minnesota as warm as Kansas by the end of the century. Some models suggest that changing climate and spreading pests could eliminate Minnesota’s iconic evergreen forests by 2100.

Urgent action is needed to limit further climate change. If we don’t reduce greenhouse gas emissions to near zero by 2060, the world will cross a dangerous warming threshold—a threshold the United States and other nations have pledged to avoid.

I am deeply worried about these threats, and so are our children, but I am also hopeful, because I have seen how tapping into our abundant wind and sunshine is building a new energy economy that is clean, green, and full of opportunity.

Here’s an example: shortly after becoming a U.S. Senator, I visited the Vetter family farm near Mankato, MN and saw first-hand how renewable energy can provide new sources of income for farmers. The Vetters raise hogs, but they also farm the sun via a 14-acre Community Solar Garden. The Vetters inspired me to become a champion for the Energy Title in the Farm Bill, which provides federal support for rural renewable energy projects.

Just three years ago, Minnesota wasn’t much of a player in solar energy, despite the fact that Minnesota has nearly the same solar potential as Houston, Texas. However, new state policy has led to strong growth in solar energy development. The state began a Community Solar Garden program in 2013, and Minnesota now has enough solar energy to power nearly 120,000 homes. During the first quarter of 2018, Minnesota was 5th in the nation for new solar installations.

Minnesota is a model, but we can expand solar energy to other parts of the country. The southeastern United States and almost all of the western half of our country have as much or more sunshine than Minnesota and lots of opportunity.

Minnesota is new to solar, but we have long been a national leader in wind energy. Today, nearly 20% of our electricity comes from wind turbines. Like solar, the fuel costs for an installed turbine are zero, and so wind energy is sheltered from the ups and downs of fossil fuel prices. Wind energy is also a rural economic engine. A single industrial-sized turbine can bring a farming family 4000 to 8000 dollars in lease revenue every year.

My state is home to the two largest wind and solar installation companies in the country—Mortenson Energy in the Twin Cities and Blattner Energy in rural Avon. Together they have installed non-emitting renewable energy capacity across the country equivalent to over 100 coal plants.

Clean energy brings good jobs. For example, “wind technician” is one of the fastest growing jobs in the country with an average salary of 54,000 dollars—and it doesn’t require a 4-year college degree.

Jobs in Minnesota’s clean energy sector are growing twice as fast as jobs in other parts of our state’s economy, and employers report that they are having trouble finding the skilled workers they need. To address this problem, I recently introduced legislation to help employers partner with high schools and community colleges so students can gain the skills they need to get these jobs.

Last year, renewable energy contributed 25% of the electricity generated in Minnesota. Nuclear power—which also does not release greenhouse gases--contributed an additional 23%. From a climate change perspective, Minnesota is already half way to becoming a 100% percent clean electricity state.

And we are not slowing down. Xcel, our largest utility, is on track to deliver 60% renewable and 85% clean energy by 2030. Great River Energy, which serves many of our rural electric cooperatives, is committed to 50% renewable by that same date. Why are they doing this?  It is not all about saving the planet. Wind energy has become the cheapest way to add new electricity to the Minnesota electrical grid.

Yes, Minnesota is windy, but so is every state in the middle of the country, and—as Senator Whitehouse described—most coastal states have tremendous wind power potential through offshore wind farms.

This summer, the McKnight Foundation released a groundbreaking analysis of what “decarbonizing” Minnesota’s economy would mean. If Minnesota continues to move away from fossil fuels and towards clean energy, we can achieve a dramatic reduction in greenhouse gas emissions by 2050. That would mean an electric mix that includes at least 91% clean energy. The outcome would be total energy bill savings of 600 to 1200 dollars per Minnesota household each year. It would also mean 20,000 more jobs in our state compared to a “business as usual” scenario with continued reliance on fossil fuels.

Given all of the upsides, it is disheartening that President Trump is clearly doing everything in his power to slow down the clean energy transition. He would rather take us backwards than have America remain a world leader pushing forward.

He is pulling the United States out of the Paris Climate Agreement. He is taking steps to roll-back auto fuel efficiency standards and trampling on the rights of states who want to maintain rigorous targets. He has tried repeatedly to keep uneconomic and polluting coal plants open—a move that, if successful, would cost American taxpayers and electric bill payers billions of dollars per year.

In a recent attack on clean energy, President Trump has proposed replacing the Clean Power Plan with an alternative that will actually increase greenhouse gas emissions and—by the Administration’s own calculation—cause up to 1,400 additional death’s per year due to air pollution. And, just yesterday, the Trump administration proposed weakening rules that limit the release of methane, a potent greenhouse gas.

First, we should set national clean energy targets. These should be a floor, not a ceiling, setting states free to innovate and adopt the best way to meet emission reductions given their local resources, local economics, and local sensibilities. Second, the federal targets should be technology neutral. The goal is to reduce greenhouse gas emissions. In one place, that might mean wind power, in another, nuclear power. Some states have great hydropower resources, while others might choose to utilize carbon capture and storage upgrades to existing coal plants.

Third, we should work with states to enhance the interstate transmission system. I have talked a lot about what Minnesota is doing on clean energy, and states like California and Hawaii are certainly also leading the way. With transmission, the Texas grid expansion provides a potential national model. That expansion is helping bring clean electricity from the windy western part of Texas to the large cities in the east.

Fourth, the Federal Energy Regulatory Commission must properly account for greenhouse gas emissions when it approves projects. It also should allow states to value their nuclear plants as zero emission sources. And, as the original fleet of nuclear plants retire, it is imperative that they are replaced by non-emitting power sources.

And last, the federal government should expand support for cutting-edge energy research, at our national labs and at state universities. The federal government must also recognize that discoveries in the lab only help if they are actually deployed. We must help states and utilities take risks on new, potentially game changing technologies. To these ends, I recently introduced legislation to help fund both research and initial deployment of new energy storage technologies.

We have everything to lose if we fail to meet the challenge of climate change. That is unacceptable. We owe our children and the next generation a better alternative.

Thank you again to Senator Whitehouse for your leadership on this issue and thank you for inviting me to join you today.

Mr. President, I yield the floor.