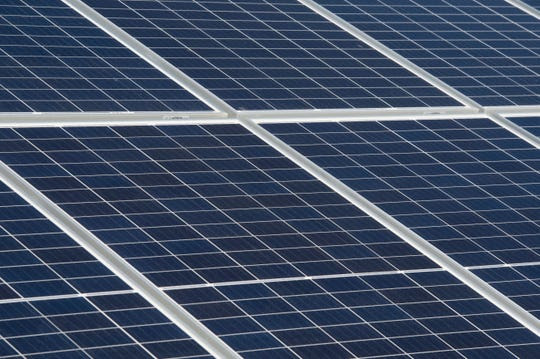 If that happens, Evansville area Vectren customers wanting to install solar power might find it will take longer to see a return on their investment.

Net metering is the billing means by which customers generating their own power are financially credited for excess electricity they send back to the electric grid.

Vectren has not filed the request with the Indiana Utility Regulatory Commission yet but details of the meeting are included in the commission's records. In industry jargon, the request would be for an "excess distributed generation tariff."

Indiana law does allow Vectren to make such a request before 2022 when net metering for new solar installations ends. However, until now, none of Indiana's investor-owned utility companies has made such a request

If it is filed and approved, customers who newly install solar or wind power would no longer receive retail rates for the extra power they generate. That is the same rate customers pay on bills. Instead, they would be credited at a lower wholesale rate plus an additional 25 percent.

This would primarily affect customers wishing to install solar power on homes, businesses and schools by making it more difficult to offset the cost — an argument made by opponents in 2017 when the Indiana General Assembly passed legislation phasing out net metering.

Vectren and Indiana Utility Regulatory Commission representatives discussed this during an hour-long presentation on Dec. 19. That presentation was discovered to have taken place earlier this month through a public records request by the Citizens Action Coalition of Indiana.

Although not illegal, the meeting was not known about until CAC made its public records request.

"That is a hefty rate increase," said Kerwin Olson, executive director of Citizens Action Coalition. "These are the monopoly utilities protecting their revenues."

A controversial law sought by the state's investor-owned utilities was signed by Gov. Eric Holcomb in 2017, phasing out net metering over a 30-year period. It set July 1, 2022, as the date by which utilities in the state will stop offering net metering for installing solar. Customers who installed solar before the end of 2017 were grandfathered into net metering's retail rates for 30 years. All net metering will go away in 2047 under the current law.

The law also allows for a utility to stop offering net metering for new solar installations earlier if it reaches a certain cap on private generation before 2022. That cap is 1.5 percent of the utility's maximum power demand in a given year.

Vectren told IURC representatives in December that it does not expect to reach its total 1.5 percent cap in 2020. But enough of its residential allocation is used up that it believes commercial projects in the work will exceed the non-reserved capacity.

Importantly, Vectren's presentation stated that any new solar users who come on after the utility reaches its total 1.5 percent cap will be allowed to participate in net metering — but only until the IURC approves its request to start billing them at wholesale rates.

"I don't think that's fair. The deal ought to be the deal," said Laura Arnold, president of the Indiana Distributed Energy Alliance and a renewable energy consultant.

Arnold said once Vectren files its request that her group would urge the IURC to make a blanket decision applying to all utilities since it has not yet addressed the issue.

"That would have a serious negative impact on the (solar) industry," said Will Kenworthy, of Vote Solar, a national advocacy group. "People make the decision to go solar based on economics and whether they can recover their investment. If there is a huge amount of uncertainty a year or so out about that, they will be inclined not to do it."

"It would definitely set solar back. It's about the return on investment for the customer. It's going to shift that return into the utilities' pockets," Morton said. "It's going to make the customer think twice about installing it."

"Vectren is considering a proposal to implement the excess distributed generation tariff in accordance with Indiana statutory requirements. We are in the process of holding discussions with multiple parties and details associated with a filing are not yet final. Vectren continues to operate under the requirements of Indiana’s distributed generation rules and provisions, and any potential filing would address only future approved investments in accordance with Indiana statute. As a filing has not been made with the IURC, further comment would be procedurally premature."