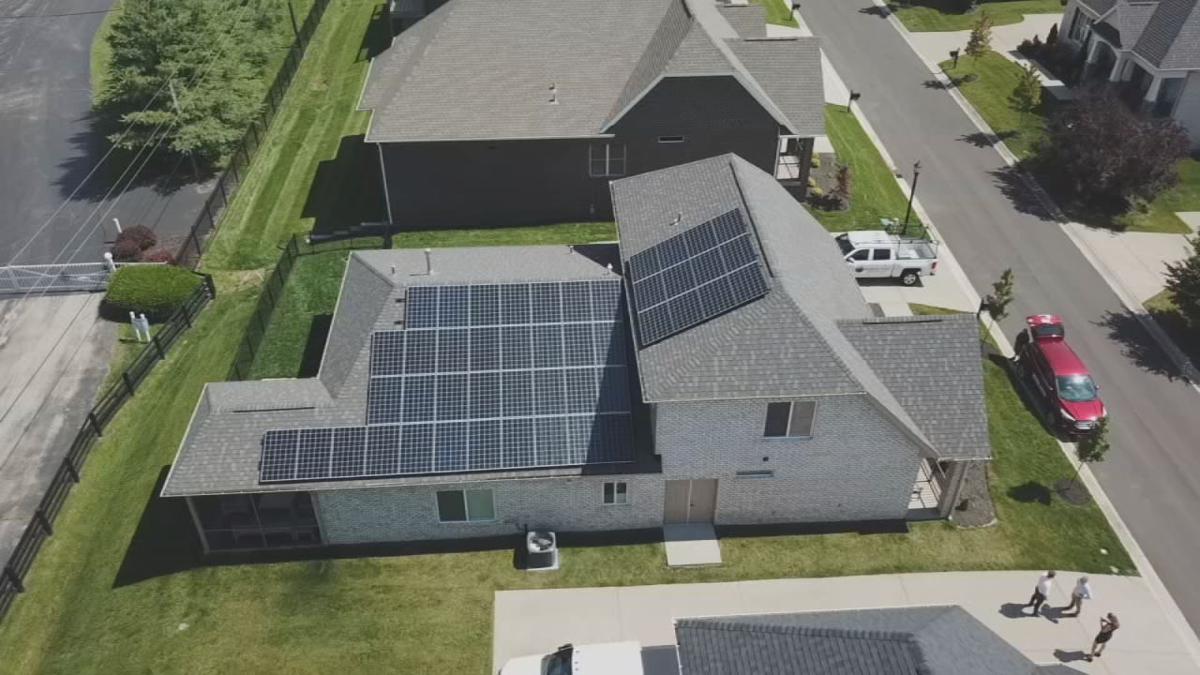 LOUISVILLE, Ky. (WDRB) – When Jennifer Adam got her monthly electric bill on June 14, it showed her family of four in Louisville’s Tyler Park neighborhood owed Louisville Gas & Electric $0 for the electricity they consumed.

That’s because the family’s usage was entirely offset by the $25,000 solar-panel system they put on their roof in March, which fed slightly more energy into the electric grid than the family pulled from it.

At this rate, Adam figures it will take about 11 years to recoup the net cost of her solar system, which was about $17,500 after a hefty federal tax break.

Adam, an industrial designer at Louisville-based Humana Inc., acknowledged the solar system was “a big investment,” but she and her husband felt compelled to do their part to fight climate change.

“I don’t know how you can look at the science and have children and not want to move to renewables,” she said.

At the same time Adam was adding the solar panels to her roof, Kentucky’s Republican-dominated legislature was finalizing a new law, backed by the state’s utility industry, that will likely make it harder for future homeowners to follow Adam’s path.

Starting in 2020, the law changes how small-scale solar owners like Adam’s family are compensated for the excess power they feed into the electric grid.

Since Kentucky first adopted “net metering” in 2004, solar owners have received a simple one-for-one credit from utilities: Every kilowatt hour of electricity the customer feeds into the grid offsets any kilowatt hours the customer consumes.

The new compensation will work differently. While the details haven’t been worked out, there is a broad assumption that it will be significantly less valuable for solar-panel owners than the one-for-one credits.

Matt Partymiller, who owns Lexington-based Solar Energy Solutions LLC and is president of the Kentucky solar trade group, said the typical payback period for a residential solar investment – currently about 12 years, on average – could “more than double” after changes to the net-metering rates.

Utilities – some of whom once supported net metering – say Kentucky’s current compensation rules represent an unjust subsidy to people like Adam, one that is paid for by the great mass of customers who can’t afford or don’t want solar panels.

“For us, it was really a fairness issue,” said Chris Whelan, spokeswoman for LG&E.

When LG&E is forced to buy power at the same retail rates that it charges for power, it’s the utility’s regular customers who pick up the tab, she said.

In a bit of twist, the new law actually creates a strong incentive for solar panel installations in the state this year.

That’s because customers like Adam and anyone who gets a solar system up and running before the new rates take effect -- which won’t be until 2020 at the earliest -- will be grandfathered, continuing to receive the more favorable one-for-one credits for 25 years.

Exactly how long homeowners have to install a solar panel before the 25-year grandfathering goes away is unclear.

Starting Jan. 1, utilities like LG&E can ask the state’s Public Service Commission to change the one-for-one credit within their territories, and it usually takes the governor-appointed commission a few months to set new rates. Once the new compensation structure is in effect, new solar systems will be subject to it.

Indiana made similar changes to its net-metering laws in 2017, and that led to a surge in installations to receive the older, more favorable rates, Partymiller said.

Then there was “big drop” in residential solar installations in Indiana, said Dan Hofmann, owner and president of RegenEn Solar, the Louisville-based company that installed the panels on Adam’s house.

Besides the changes coming to net metering in Kentucky, Hofmann noted that the hefty federal tax credit that currently offsets the cost of a solar system by 30 percent is scheduled to decrease next year and to go to zero in 2022.

“If you’re in Kentucky and you’re thinking about going solar, you want to do it now,” he said.

With some exceptions, the utility-backed bill, Senate Bill 100, passed largely along party lines in the Kentucky General Assembly earlier this year, with Republicans favoring it and Democrats opposed.

But the issue wasn’t always so contentious.

The 2004 bill that created the one-for-one electricity credits passed with a dissenting vote and was signed into law by former Republican  Gov. Ernie Fletcher.

At the time, LG&E said it had “no quarrel” with the policy and that it would promote the new net metering for solar as one of its energy efficiency programs, according to a 2004 Courier-Journal story.

“We supported the bill 15 years ago because we wanted to promote the growth and education of renewable energy,” Whelan, of LG&E, said in an email. “At that time, there was little to no private solar systems installed in our service territory.”

Now there about 1,000 customers in LG&E’s footprint who take advantage of net metering, Whelan said.

But as the cost of solar panels continues to fall  “non-solar customers still subsidize those who can afford to have private system installed,” she said.

Whelan said solar-generating customers aren’t paying enough for the poles, wires and other fixed costs that are necessary to provide conventional electricity to their homes when the sun isn’t shining or in the winter, when days are shorter.

“We want to ensure that the fixed costs needed to provide energy 24/7 are fairly distributed while still allowing solar to thrive in Kentucky,” she said.

LG&E has made similar arguments in recent years as it seeks to shift more of its bills into set, monthly charges that don’t depend on how much energy a customer uses. Solar generators like Adam still have to pay those “basic service” charges – currently $13.50 per month for electric service.

State Sen. Ernie Harris, R-Crestwood, sponsored the 2004 bill that created the one-to-one energy credits for solar. In February, he voted for the utility-backed bill to roll those credits back.

In an interview last week, Harris said that 15 years ago, “We all recognized that alternative sources of energy were out there. I felt it was important to try to jump start a fledgling industry in Kentucky.”

Now that the industry is established and costs are falling, Harris said he thinks “a neutral third party”—the Public Service Commission – should decide how solar-system owners are compensated.

He stressed that homeowners who relied on the current policy to offset their investment won’t be affected because of the 25-year grace period.

Falling materials costs and rising competition in the “more mature” solar industry should counteract the negative impact of the net-metering changes, Harris said.

“We don’t want to cripple the industry; we want to promote it,” he said.  “… I am hopeful it will continue to grow in the state.”

Hofmann, the owner of RegenEn Solar, isn’t so sure. He has begun selling solar systems remotely to customers in Oregon and plans to expand to states with pro-solar policies like California and South Carolina.

“Now that solar is taking a hit in Kentucky, that has given us the push that we need, so we’re expanding nationally,” he said.