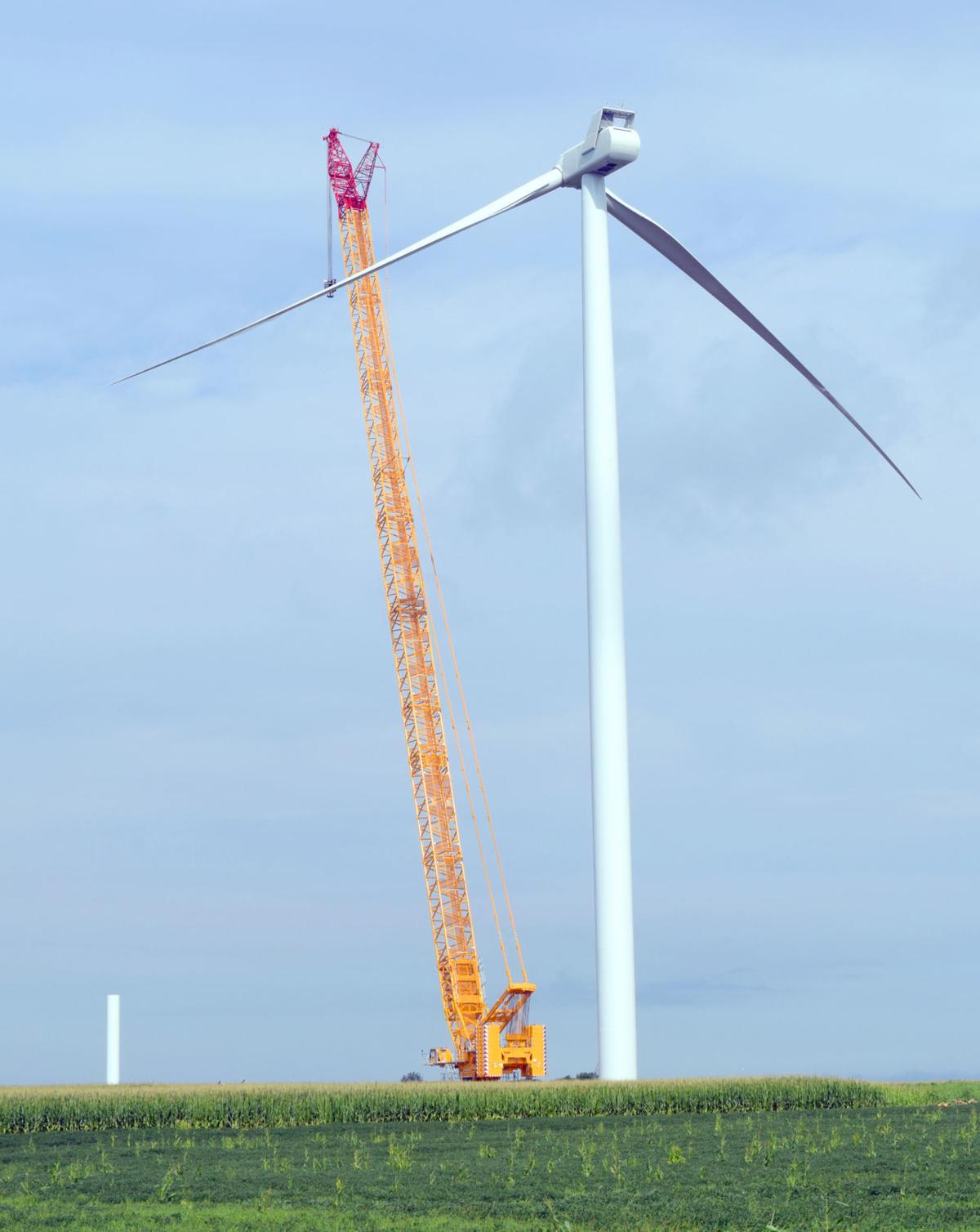 WOLCOTT — The winds picked up speed Tuesday morning while EDP Renewable officials opened up a portion of Meadow Lake Wind Farm for a public up-close view.

The wind turbine being constructed is the first of about 50-plus in various stages of construction at Meadow Lake.

EDP Renewables is the owner and will be the operator of the 200-megawatt Meadow Lake VI Wind Farm. EDPR owns and operates the five operational phases of the Meadow Lake Wind Farm — most of which are in White County, near Chalmers and Brookston. Wind Farm VI, which will have the largest turbines reaching 570 feet from the ground to blade tip, are being built mostly in Benton County.

“This American Wind Week, we salute the more than 105,000 U.S. workers who make it possible to transform the power of wind into affordable electricity that our families and businesses rely on,” said Tom Kiernan, CEO of the American Wind Energy Association, a Washington, D.C.-based national trade association formed in 1974, representing wind power project developers, equipment suppliers, service providers, parts manufacturers, utilities, researchers, and others involved in the wind industry.

“We’re building more U.S. wind power today than ever before,” he said. “This is what leadership looks like — growing economic opportunity, homegrown energy and cleaner air from sea to shining sea.”

Phase I became operational in 2009, followed by phases II, III and IV between June and October 2010. Phase V was built last year.

The goal is for the wind farms, collectively, to reach 1,000 megawatts, which company officials say would make it one of the largest wind farms in the world. Meadow Lake is currently the largest facility in Indiana.

Visitors on Tuesday had an opportunity to visit the construction site of an almost-complete new turbine. Sitting next to the large crane, the turbine was missing one blade.

Known within the wind industry as the V136, the new turbine will stand 570 feet high, from its base to the tip of the blade. To put that into perspective, it will stand almost twice as high as New York’s Statue of Liberty, which reaches 305 feet tall.

Each blade on the turbine is about 218 feet long from a hub that is about 345 feet off the ground. The hub is where all the blades are attached.

“The longer the blades, the more energy (the turbine) can produce,” said Andrew Magner, product developer for EDP Renewables based in Indianapolis. “The original turbines that were build (around 2009) are about 430 feet tall. The ones we put up at a site last year (Phase V) are 492 feet tall.”

Tubular steel towers support a hub with three attached blades and a nacelle, which houses the shaft, gearbox, generator and controls. Wind measurements are collected to automatically rotate the turbine to face the strongest wind and angle, or “pitch,” its blades to optimize the energy captured.

Electricity must be produced at just the right frequency and voltage to be compatible with the utility grid.

“We invited people from the local communities to tour the construction site, see the turbines, the foundations, the towers, see the size of them and to see how complex the engineering and construction operation is that goes into putting these machines up,” Magner said. “It makes a big difference when you see it on the ground versus up in the air. It’s kind of cool to get to see that in person.”

Officials added that $115.5 million was spent within 50 miles of Meadow Lake through 2017. They said Meadow Lake has created 429 full-time equivalent jobs during construction and 38 permanent jobs.

Cummins Inc. is an off-taker of the Meadow Lake VI Wind Farm, purchasing 75 megawatts of energy from the project. Mortenson is the balance of plant contractor for the project, and Vestas is the turbine supplier.

Michael Johnson is editor of the Herald Journal.