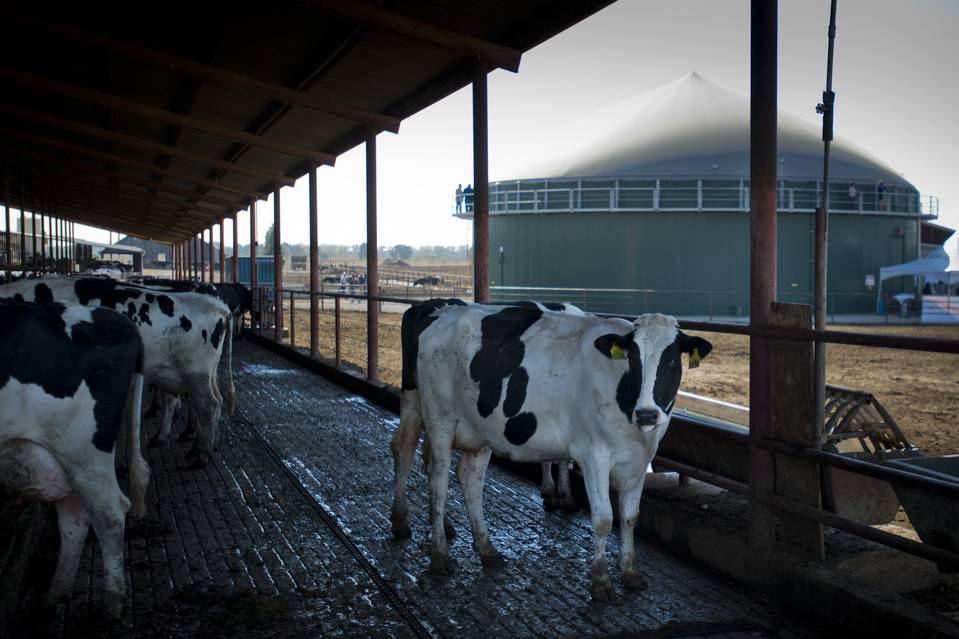 Anaerobic digesters convert cow manure into gas, which can then be used to fuel electricity generation. Above, a digester at the New Hope Dairy in Galt, Calif., in 2013. PHOTO: MANNY CRISOSTOMO/SACRAMENTO BEE/ZUMA PRESS

Wisconsin dairy farmer Art Thelen was full of optimism a decade ago when he joined a growing group of U.S. farmers investing in technology that turns livestock manure into electricity.

The systems promised to curb air pollution from agriculture, generate extra revenue and—in no small feat—curtail odors that waft for miles in much of farm country.

“It was a great idea, and when it worked well, it was wonderful,” Mr. Thelen said.

Now the 61-year-old is among a group of farmers who recently have shut down their manure-to-energy systems—known as anaerobic digesters—or scrapped plans to build them because of the prolonged slump in natural-gas prices and higher-than-expected maintenance costs that made the systems less economical.
Construction of new U.S. farm digesters has slowed sharply over the past two years, marking a challenge for the Obama administration, which is pushing the technology as a way to curb greenhouse-gas emissions. Agriculture accounts for 36% of human-related emissions of methane—a potent heat-trapping gas—in the U.S., making it the biggest source, according to the White House.

Some big meatpackers that have supported development of digesters have become more cautious, too. Perdue Farms Inc., among the largest U.S. chicken processors, has pledged to contribute poultry waste to a planned Maryland biogas project, but the company has rejected several other manure-to-energy proposals.

“With today’s fossil-fuel prices,” many such projects “can’t stand on their own,” said Mike Phillips, director of special projects for Perdue AgriBusiness.

Digesters are oxygen-free tanks in which microorganisms break down waste and capture methane that otherwise would be released into the atmosphere. The biogas from digesters, mostly composed of methane, can be burned to produce electricity or cleaned and pressurized for transport in natural-gas pipelines. The digestion process also yields products like fertilizer that farmers can use or sell. And by diverting waste from open-air lagoons, digesters limit the potential for spills that can pollute waterways.

About 260 digester projects were active or under construction on U.S. farms as of May 2015, according to data compiled by the Environmental Protection Agency from voluntary sources. Only six new projects became operational or were under construction in 2014, down from an average of about 30 a year from 2008 to 2013.

The Obama administration’s plan to reduce methane emissions relies on farmers voluntarily using digesters, though some federal grants and loans help pay for the systems. A “biogas opportunities road map” issued in 2014 by the Agriculture and Energy departments and the EPA projected that broad adoption of the systems could produce energy to power 1 million U.S. homes, up from about 70,000 at the time. Last year, the USDA announced a goal to support the installation of 500 new farm digesters by 2025. 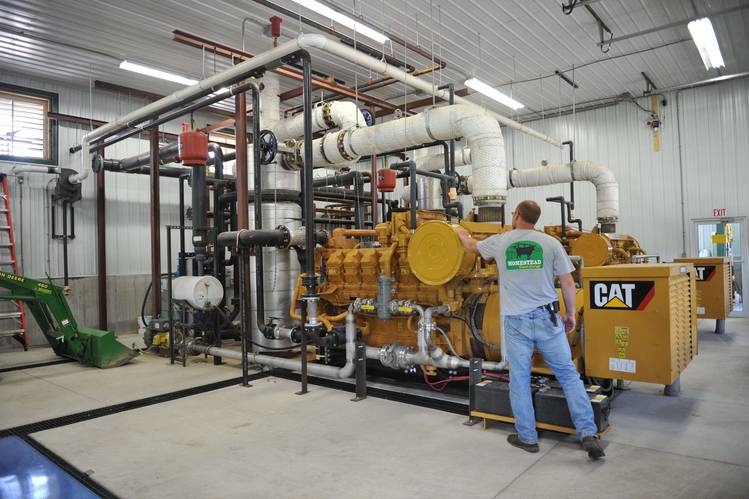 But installing and operating digesters has become tougher for farmers. Buying the systems can cost millions of dollars, which farmers typically fund through long-term sales agreements with utilities. Manure from a typical 1,000-cow dairy farm can produce enough electricity to power about 250 homes, said Melissa VanOrnum, vice president of marketing at DVO Inc., a digester provider.

Some utilities, including in Wisconsin, are paying less for manure-generated electricity amid a national slump in power prices driven by cheap natural gas. Wind and solar power also have gotten less pricey, making them more attractive than manure biogas for utilities seeking to meet state renewable-fuel standards.

Nevertheless, installations are expected to pick up in New York, California and a few other states thanks to state government financial incentives, Ms. VanOrnum said.

Smithfield Foods Inc., a subsidiary of China’s WH Group Ltd. and the world’s largest pork processor, has pursued biogas projects since the 1990s and remains optimistic about their potential, despite having to shut several operations because they weren’t as efficient as expected, Smithfield officials said. The company has a handful of existing projects and two pending.

“We want to do everything we can to promote the use of swine manure as an energy source, but there are hurdles to it and we’re trying to work through them,” said Kraig Westerbeek, Smithfield’s vice president for environment and support services.

For biogas-system designers like DVO, markets overseas help make up for the slowdown in the U.S. Germany has more than 8,000 digesters, thanks to a law guaranteeing renewable-energy producers above-market rates for their power for years. China, France and Denmark also encourage the use of farm digesters.

Wisconsin, the second-biggest dairy producer after California, long has led the U.S. in farm digesters. But farmers’ interest has waned, in part because some contracts with utilities reached last decade to promote digester installation are nearing expiration and new terms aren’t as good.

Wisconsin utilities including Alliant Energy Corp. have received state approval to pay around 3 cents per kilowatt-hour of electricity produced from manure, down from 8 to 9 cents guaranteed to some farmers last decade.

Alliant is exploring further digester partnerships and “we view them as playing an important role environmentally,” a spokesman said. But “digesters are more complicated and expensive to maintain” than wind and solar programs.

Mr. Thelen, who runs Wild Rose Dairy near La Farge, Wis., said he and partner Dairyland Power Cooperative decided to halt their digester project about a year ago. One big challenge: maintenance costs for the generator, due in part to corrosion by a chemical common in biogas, he said.

“It got to the point where the electricity was way too high-priced coming out of the digester to be sold on the main line [and compete] with cheaper stuff like solar and windmill towers,” Mr. Thelen said. 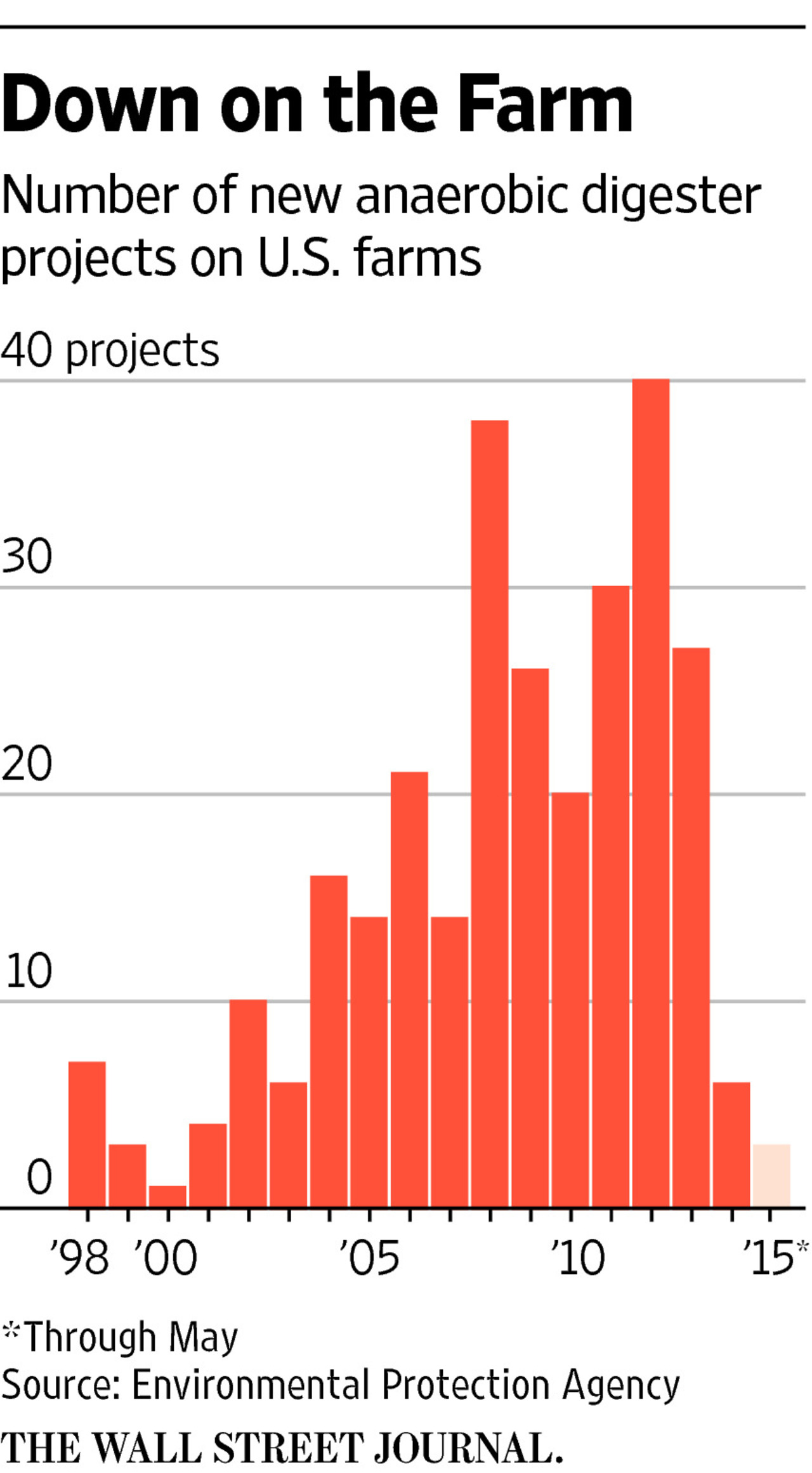