As the solar-power industry skirmishes with utilities over the growth of the home solar-panel business, it is enlisting a new political ally: tea-party activists and conservative groups.

Renewable-energy firms have traditionally sought help from the political left by touting the environmental benefits of greener power. But as the industry grows in states with heavily Republican populations, such as Arizona and Georgia, it is trying to broaden its base of support by framing the dispute on solar reimbursement rates as one of free markets and greater consumer choice. 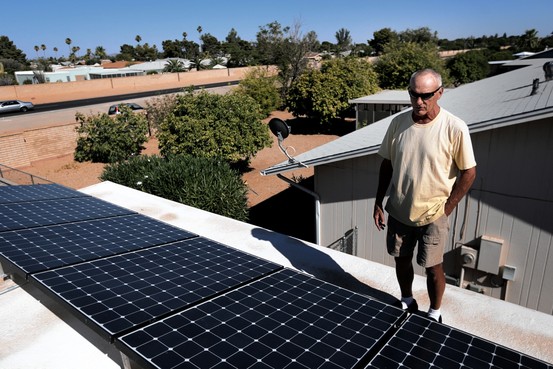 Sandy Huffaker for The Wall Street JournalGene Westemeier of Sun City, Ariz., fears his utility may boost what he pays for nighttime electricity use.

Whether the tactic works will be seen in coming months, as Arizona and Georgia weigh regulatory changes for rooftop solar installations. Arizona could lower what utilities pay residential customers for excess power generated by solar panels, while Georgia could set requirements to promote solar.

In Arizona, where the solar industry and the state's largest utility, Arizona Public Service, are battling, a statewide trade group representing home solar-installation companies has launched a group called Tusk—Tell Utilities Solar won't be Killed—headed by Barry Goldwater Jr., the son of the late conservative icon. It uses an elephant as its logo, much like the GOP, and has turned up political pressure on the elected state panel that sets energy policy.

In television commercials and online ads and videos, Mr. Goldwater has argued that the utility is trying to "extinguish" solar power and preserve a monopoly on electricity production.

Local utilities "ought to be encouraging people in Arizona to put these on their roof," he said, "not discouraging it." Mr. Goldwater also argued that Republicans should support solar power because it provides consumers with a choice, similar to vouchers for public schools.

Mark Schiavoni, an executive vice president at Arizona Public Service, a unit of Pinnacle West Capital Corp., PNW -0.64% said its 18,000 customers with rooftop solar are effectively being subsidized by 1.1 million other ratepayers. He sees the solar industry's appeal to free-market conservatives as a ploy. "They are trying to protect their business," he said, "and they will fight tooth and nail" to prevent any rule changes on how much homeowners are paid for excess electricity.

Solar-panel owners generate on average about 70% of the electricity they need, pulling the remainder from the grid at night and on cloudy days, APS estimates. 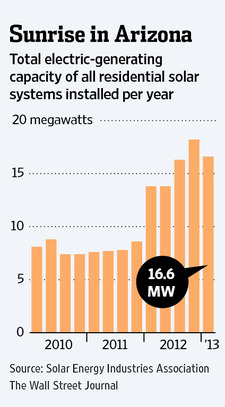 APS credits those customers on their bills for the solar power they generate, based on high retail power prices, which wipes out most of the customers' utility bill, other than a $16 monthly service charge, according to APS. But the utility believes the credits are too generous and don't fully reflect the value of the solar power, which APS believes is lower, said APS spokesman Jim McDonald.

Mr. McDonald declined to detail the new payment system APS plans to propose to state regulators next week, but said it would "resolve the issue in a way that's fair and sustainable" for all customers.

So far, letters to the Arizona Corporation Commission are running heavily in favor of not changing the existing rules.

Gene Westemeier agreed in 2012 to pay $70 a month for 20 years to a California firm that installed 16 solar panels on the roof of his Sun City, Ariz., home. He said the benefits he gets from the extra power he transfers to APS more than makes up for that cost, but fears APS may try to increase what he pays for nighttime electricity use.

The solar industry's stepped-up involvement in state politics comes as it experiences rapid growth in the U.S. Home installations across the country rose 53% in the first three months of 2013 compared with a year earlier, according to a solar trade group, as prices for solar panels have fallen dramatically.

The torrid growth hasn't gone unnoticed. The Edison Electric Institute, a utility trade group, said earlier this year that solar and other rapidly growing technologies could create a "significant future disruption to the utility business model."

In Georgia, where the state's Public Service Commission is considering a 20-year plan for future electricity generation submitted by Georgia Power, the state's largest utility, the solar industry is recruiting tea-party activists to push for rules that would boost rooftop solar.

It wasn't a hard sell, said Debbie Dooley, co-founder of the Atlanta Tea Party, who explained that tea-party activists were already livid about plans by the unit of Southern Co. SO -0.65% to pass the cost overruns of a nuclear power plant expansion to customers.

"We believe Georgia Power is being fiscally irresponsible and we believe consumers should have a choice," Ms. Dooley said. Georgia Power said in a statement that it "listens closely to the concerns and ideas of the tea-party groups."

Lauren "Bubba" McDonald Jr., a Republican member of the state commission, said he now supports allowing more rooftop solar power than what the utility has proposed, seeing it as an issue of choice. He says he firmly agrees with the local tea party.

"I'm an old conservative and businessman," Mr. McDonald said, explaining that the energy business is changing and the future of old power sources such as coal are becoming less clear. But, he added, "I will tell you one thing: The sun will be shining, and that is free energy."

—Cassandra Sweet contributed to this article.

Write to Russell Gold at russell.gold@wsj.com

A version of this article appeared July 3, 2013, on page A3 in the U.S. edition of The Wall Street Journal, with the headline: Solar Groups Seek Tea-Party Support.

My Indianapolis home delivered copy of the Wall Street Journal carried this story on page A3 with the headline: Excess Solar Power Rates in Dispute.