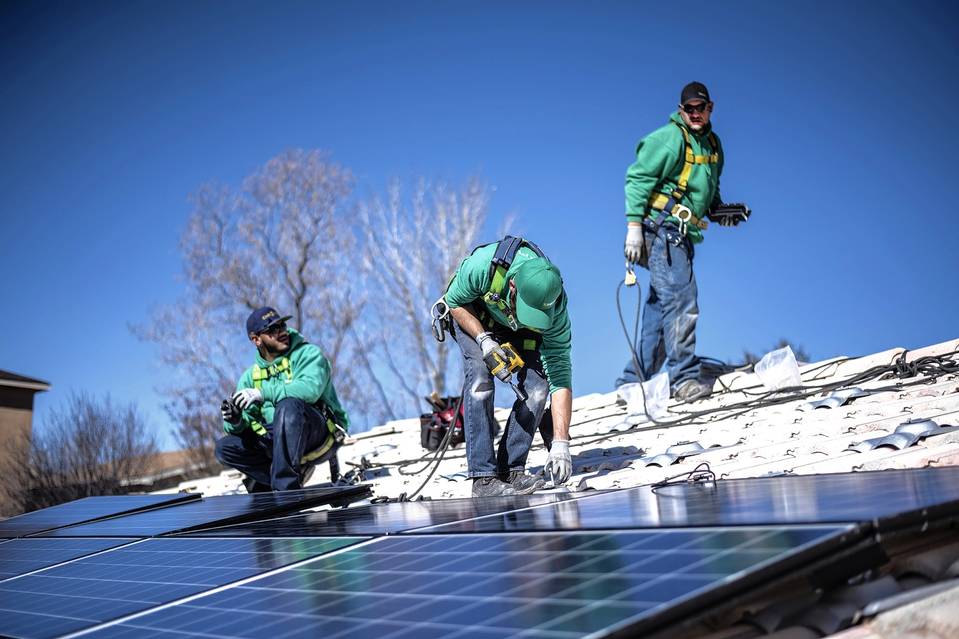 Workers install solar panels for SolarCity on the roof of a home. More companies are offering loans to consumers that is making buying more achievable and cost effective. PHOTO: SERGIO FLORES/BLOOMBERG NEWS

Companies such as SolarCity Corp. and Sunrun Inc. that rapidly expanded by leasing solar panels to U.S. homeowners now face stiff competition from smaller upstarts that sell the units to customers instead.

SolarCity, Sunrun and Vivint Solar Inc. together supplied 56% of the home-solar market in the U.S. last year, primarily with leases, according to GTM Research, which tracks renewable-energy markets.

They are on track to serve just 50% this year, according to GTM, as smaller companies such as Sunworks Inc. and PetersenDean Inc. that offer loans to purchase the panels pick up more business.

Solar leases and similar contracts, known as power-purchase agreements, accounted for 72% of home-solar sales in 2014, but their share is projected to drop to 48% by 2017, according to GTM. The companies also install panels at commercial properties. Leasing became a popular way for customers to obtain home solar panels without having to come up with the large upfront amounts needed to buy a system.

Six-kilowatt systems currently cost between $21,000 and $25,800, according to the Solar Energy Industries Association and GTM.

It is a profitable model for companies, which collect lease payments from customers every month for about 20 years, under contracts that often increase payment amounts each year. For example, a California homeowner might pay $17,500 to buy an average-size five-kilowatt system, whereas​ a 20-year lease with monthly payments that start at $150 and increase ​2.9% a year would have lease payments totaling about $36,600.For consumers, owning the panels can bring greater long-term savings, and more companies have begun offering loans, making buying more achievable and cost effective.

Dozens of lenders now offer consumer loans for solar panels, with interest rates between about 3% and 9%, whereas a few years ago, such loans were more difficult to find. SolarCity—whose chairman is billionaire entrepreneur Elon Musk, who also leads Tesla Motors Inc. and Space Exploration Technologies Inc.—has been unprofitable each year since it went public in 2012. The company has a market value of about $2.3 billion, according to FactSet.

The San Mateo, Calif.-based company started offering solar loans again in May, in addition to leases, after initially trying them last year before withdrawing them because of a lack of demand.

“We got a lot of feedback from customers who wanted simpler terms and fixed payments,” said SolarCity Chief Executive Lyndon Rive, referring to the loans.

SolarCity’s stock price is down 53% this year to about $23.74. The company reported a first-quarter net loss of $25 million, 16% more than a year earlier.

Sunrun likely will increase the number of solar panels it sells this year for cash or through a loan to 20% of sales from 15% last year, although the company is still focused on leases, said Sunrun Chief Executive Lynn Jurich.

“The lease has really maintained a pretty dominant share,” she said earlier in May during a conference call with analysts to discuss the company’s first-quarter financial results.

Sunrun posted a first-quarter net profit of $13 million, compared with a year-earlier loss of $18 million. The company’s stock is down 49% year-to-date at about $6.

Solar leasing is losing market share because consumers are doing their homework and are discovering viable alternate options, said Michael Morosi, an analyst at Avondale Partners in Nashville.

“The customer is more informed, and is exposed not only to SolarCity because their neighbor has it, but five other solar companies that are all active in the marketplace,” he said.

Smaller companies, such as Sunworks and PetersenDean in California and Trinity Solar in New Jersey, are gaining because falling prices for panels and other equipment are making purchasing more affordable, and a growing group of lenders, such as Admirals Bank and Solar Mosaic Inc. offer home-solar loans.

“Most of our customers spend time researching solar and looking into how it can benefit them,” said PetersenDean CEO Jim Petersen. “The lease is not a good product, it does not save money for consumers.”

​Closely held PetersenDean installs more than 1,000 arrays a month and is on track to double its business this year, for the second straight year, he said.

Among those choosing to buy panels are Gale Webber and her husband Michael, who in September bought a four-kilowatt panel for their Galt, Calif., home for $16,000 from PetersenDean. A $5,000 federal tax credit knocked the cost down to $11,000.

The Webbers initially signed a 20-year lease with SolarCity after a friend recommended the company. But when SolarCity sent the couple a contract that included monthly payments of $280, nearly double the company’s initial offer and more than they were paying for their utility, they canceled the lease.

“I can’t believe people sign with those people,” Ms. Webber said, adding that her monthly utility bill is now about $100, roughly half what it was before her panels were installed. “They don’t realize in 20 years they’ll have this huge bill.”

SolarCity spokesman Jonathan Bass said a software glitch gave Mrs. Webber the wrong pricing, and by the time the company got back to her she had become frustrated and went to another provider.

Write to Cassandra Sweet at Cassandra.Sweet@wsj.com