WSJ: Tariffs Boost Solar-Panel Makers in U.S.; What will be the long-term impact on installed solar PV prices? 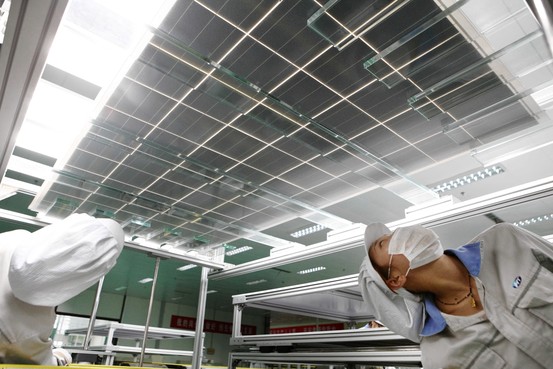 New tariffs on Chinese solar panels, including widely anticipated duties imposed by Washington on Friday, are spurring companies to manufacture more solar-power equipment in the U.S.

Two U.S. companies— SolarCity Corp. SCTY +0.57% and Suniva Inc.—have recently announced plans to build solar-panel factories in America, and at least one Chinese manufacturer says it is considering joining them.

Panels from China have been far cheaper than those produced in other countries, driving down overall prices in the U.S. by about two-thirds since 2010. Chinese panels are now going for about 68 to 73 cents a watt, compared with an average of 83 cents for panels made in Europe, Japan and the U.S., according to a study by GTM Research in Boston (the average household solar-power system is about 5,000 watts).

Chinese companies supplied about a third of the panels installed in the U.S. in 2013, GTM says. U.S. developers installed about 4,800 megawatts of solar panels in 2013 and are expected to install about 6,600 megawatts this year, according to GTM.

The Commerce Department on Friday slapped provisional duties of between 26% and 42% on equipment made by several Chinese solar-panel makers, over accusations that the companies dumped their products into the U.S. at unfairly low prices. The department assigned tariffs of 165% to Chinese firms that it said didn't respond to its inquiries.

Last month, the Commerce Department levied temporary tariffs ranging from 19% to 35% on the same group of Chinese solar-panel companies, which it accused of receiving unfair government subsidies. Both sets of tariffs won't become permanent until they receive final approval from the Commerce Department, which is expected to rule by December, and then the U.S. International Trade Commission, which is expected to rule on the tariffs by January.

The duties are part of a two-year battle sparked by complaints from the U.S. division of SolarWorld AG SWVK.XE -7.84% , a German panel maker with a factory in Oregon.

The duties would affect most Chinese solar-panel makers. China-based Trina Solar Ltd.TSL +0.71% and Yingli Green Energy Holding Co. YGE +0.57% Ltd. deny their operations are heavily underwritten by the Chinese government and say they haven't dumped products in the U.S.

The company has been considering opening a factory outside China, possibly in the U.S., Mr. Zhu said, adding that the duties "speed up our plans to manufacture outside China."

Suniva Inc., which is based in Norcross, Ga., employs about 250 people at its panel factory there and also outsources some manufacturing to China. The tariffs have helped make its American products more price-competitive, said Matt Card, vice president of global sales. The company started construction this week on a new factory in Saginaw Township, Mich., which will employ about 350 people.

SolarCity, of San Mateo, Calif., plans to build a factory in New York State within the next two years to build panels developed by Silevo Inc., which SolarCity bought in June for $200 million in stock, debt and cash.

"The tariffs were not a major factor in our decision, but they do make domestic manufacturing even more attractive," SolarCity spokesman Jonathan Bass said.

Even if the Chinese companies pass on the added costs of the tariffs, the duties aren't likely to dent demand from homeowners, analysts said. Companies that install residential systems compete with each other to offer the lowest-priced electricity, not the lowest-priced panels.

"I don't really see a huge impact on customers in the residential sector," said Shyam Meta, an analyst at GTM. "It's more in the utility-scale sector where the economics become more challenging."

Strata Solar, a small solar-farm developer in Chapel Hill, N.C., used to buy low-price Chinese panels, but those prices have increased by 15% to 20% because of the new duties, said John Morrison, a senior vice president at the company.

"This is the wrong way to go," he said. The company has switched to buying thin-film panels made by Arizona-based First Solar Inc. FSLR +1.18% and by Chinese manufacturers. Chinese thin-film panels aren't subject to the tariffs, as they use a different technology than the more mainstream silicon panels that are at the center of the trade case.