WSJ: Vegas Casinos Fight to Buy Their Own Electricity 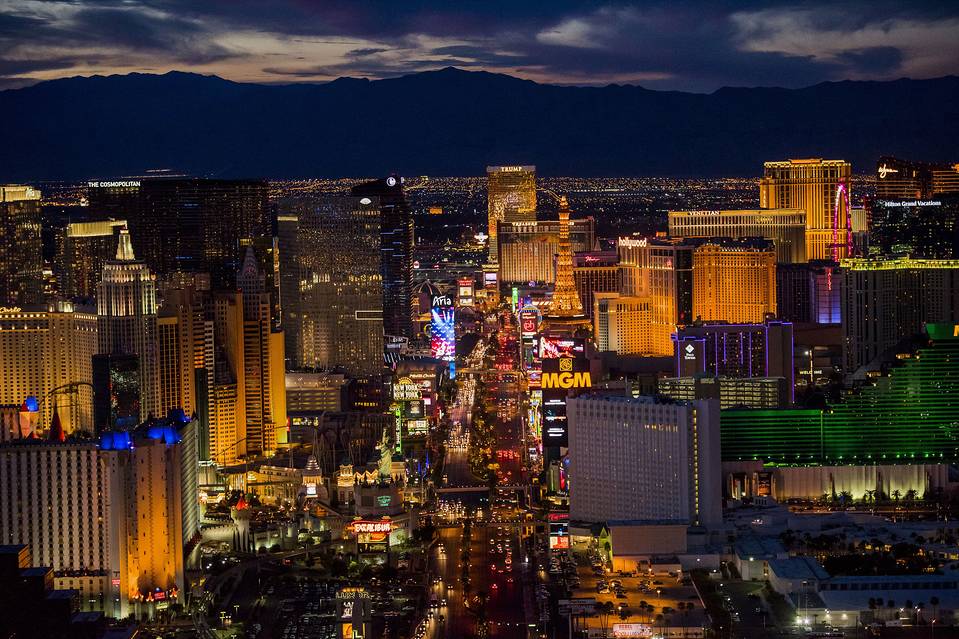 Vegas Casinos Fight to Buy Their Own Electricity

Hoteliers including Wynn Resorts Ltd., MGM Resorts International and Las Vegas Sands Corp., which operate more than a dozen massive gambling palaces in Nevada, say they could cut millions of dollars from their electric bills if they could buy power directly from solar farms or power-plant owners.

But NV Energy, which is owned by Warren Buffett’s Berkshire Hathaway Inc., is pushing state regulators to make it very expensive for the casinos to stop buying its power, according to documents released by the state’s Public Utilities Commission. NV Energy declined to comment.

The same struggle is occurring across the country as large power users watch wholesale energy prices fall while their utility bills rise. New York, Texas and 11 other states allow residents and businesses to buy their electricity from competitive suppliers, but Nevada is among the majority of states that require most customers to buy power from monopoly utilities.

The fight is particularly acute in Vegas, where keeping the bright lights of the Strip shining—and creating permanent daylight indoors so the gambling never stops—requires a lot of juice.

Data from MGM Resorts International show that its Las Vegas properties, including the Bellagio and Mandalay Bay, use more electricity than Key West, Fla., a tourist destination with more than 2.5 million visitors each year. According to the commission, the three casino owners challenging the power utility account for more than 5% of the electricity sales of NV Energy, which generates power and also buys it from other companies.

The casinos say they would like to use more renewable energy to live up to commitments they have made to shareholders and customers. Many other large companies, including Wal-Mart Stores Inc. and General Motors Co., have joined together to push for better access to renewables but say some utilities are charging too high a premium for it.

Casinos say that is part of what is going on in Nevada. After Berkshire bought NV Energy in December 2013, the utility signed long-term contracts to buy solar power for as little as 3.9 cents a kilowatt-hour from First Solar Inc. and SunPower Corp., according to documents NV Energy filed in July with the state regulatory commission. Wholesale conventional power is even cheaper, going for an average of 3.5 cents a kilowatt-hour at a hub in southern California, where Nevada gets some of its power. That is down 34% from 2014, and 57% below 2008 prices, according to data from Intercontinental Exchange Inc.

The company charges the casinos and other big commercial clients between nine and 10 cents a kilowatt-hour for a mix of conventional and renewable power, according to the casinos, utility documents and data from the U.S. Energy Department. 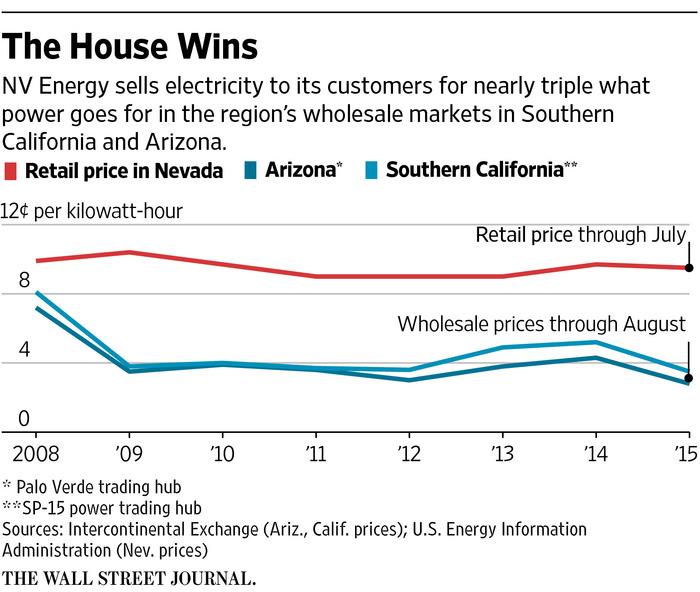 Wynn could cut its power costs by as much as 40%, or $7 million a year, by purchasing electricity directly from energy suppliers, Mr. Maddox said, adding he can’t see why the resort should be forced to buy power from NV Energy when the utility is doing little to keep costs down for its consumers.

“They are over-earning and not passing on savings,” he said.

Las Vegas Sands wants to buy more renewable power as part of an effort to cut its energy use and be more environmentally responsible, but the company can’t reach its goals without more buying options, said Rob Goldstein, the company’s president and chief operating officer.

So far, state regulators are taking the utility’s side. Despite a 2001 law that allows large energy users to switch power suppliers, the Public Utilities Commission of Nevada has never granted customers permission to leave the Las Vegas utility.

A commission spokesman declined to comment. But when a large data-storage company tried to leave the utility last year, regulators said that the departure of a big customer was unacceptable because other customers’ bills would rise sharply to make up for the loss of revenue.

The casinos say that sum—which represents years of electricity bills—would make it too expensive for them to leave.

The Public Utilities Commission of Nevada is expected to make a decision by December.

Meanwhile, Sands and MGM are already generating electricity from rooftop solar panels at their properties. The ones atop MGM’s Mandalay Bay hotel and convention center supply as much as 20% of the complex’s electricity. Las Vegas Sands said solar panels at its Palazzo Resort provide a small portion of the hotel’s electricity, while a separate array heats water used in the building’s swimming pools and spas.

Wynn said it is considering installing panels at its resorts.